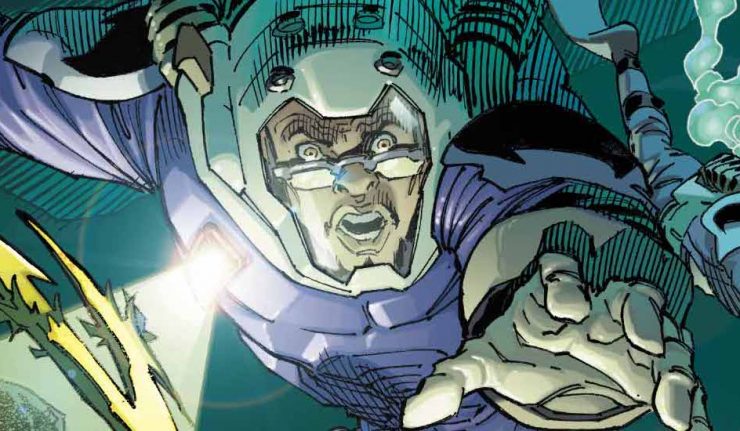 Every member of the New Challengers is seized at the moment of their death. It’s the foundation — part of the foundation — of their membership on the team. This means they all have a past, but only Moses Barber’s past ties directly to their current mission. Which, when last we saw them was at the end of the world, or rather at a moment when the ocean became a right angle with an edge, and the team about to tumble over it.

Similar to the last issue, New Challengers opens with a character’s backstory. Moses Barber, hacking away in the back of a fifth wheel hitched to an old pickup, has just found the final piece of the pattern of code he has chased for years. The introduction and the invitation promise answers, but when Moses doesn’t state that he knows what and who they are, they brag about their force of will and then shoot him in the face, just to prove that they have the power and are willing to use it.

This is the last thought that Moses remembers as he is in the water with the rest of the team. It is important when he learns that the music coming from the object they are seeking matches the frequency of the code he was collecting before he died. It explains why he risks his life to break through the force field surrounding the glowing object, risking death at the hands of the creatures that killed him. Moses actually says, “That is the object of my death.” Seems they are either protecting the object, seeking the object for themselves or just killing Moses again. Luckily for Moses, Krunch is there to drag him back to the team so they can be extracted back to Challengers Mountain.

But first, there is a group of prehistoric creatures attacking them. While they struggle to get away, the professor, the guy who is supposed to be helping them, remembers that he can send them equipment through the hourglass symbol on their skin and high-pressure deep-sea diving suits take shape around them. Before they reach the object, the Challengers are rescued by Aquaman. He can sense the disturbance in the water, and he then states that the ocean he commands is disappearing into space. He then witnesses an apparition of Atlantis in its glory and then watches in horror as it falls, and he is again powerless to stop it. When it is finished, Aquaman is left feeling cold and he calls the Hall of Justice. The setup line here is that he does not call for the others to come to assist him or the Challengers, but instead says, “I think we need to make a call.”

I like the distortion of time and reality when the Challengers report that they have encountered a plesiosaur and that the ocean floor is teeming with creatures that have not lived for millennia. It is here when Moses recognizes the object and its frequency. And of course, it is here when the creatures that killed him — creatures who have to wear high-pressure diving suits also — begin their attack.

It is interesting that when Moses first met these figures they wore bloody wraps around their faces like leprous mummies. The fact that they have to wear the diving suits, for all of their statements and claims about the power of their will, shows that they are still fallible. They are prone to weakness and that is something the Challengers can use when they meet them again. And of course, there is the definite feeling that they will see them again.

The Challengers are ready for some answers. When they start asking, the Professor gets defensive and then he gets knocked out. Turn to the last page and there are four figures wearing the classic Challengers uniforms on a giant splash page with a bloody and unconscious Professor at their feet. It’s Ace, Rocky, Red, and the Prof.

Ace says that they are the real Challengers of the Unknown and that they want answers.

I have nothing but respect for the challenge of artists capturing elements like the ocean. But there is something that happens to the colors that is disorienting. I know that the muted blues and browns and tans are there to make the color feel like the blurry distortion of the sea, but there are times when it hurts more than it helps.

The first issue was an ugly twist on the clean-cut history of the original Challengers. It leads to a great setup for this reveal at the end of issue 2. It creates an emotional tug that will make fans of the original characters long for the world to be made or set right. I don’t think that is what will happen, but I like the creation of multiple expectations for the next issue and the rest of the series.