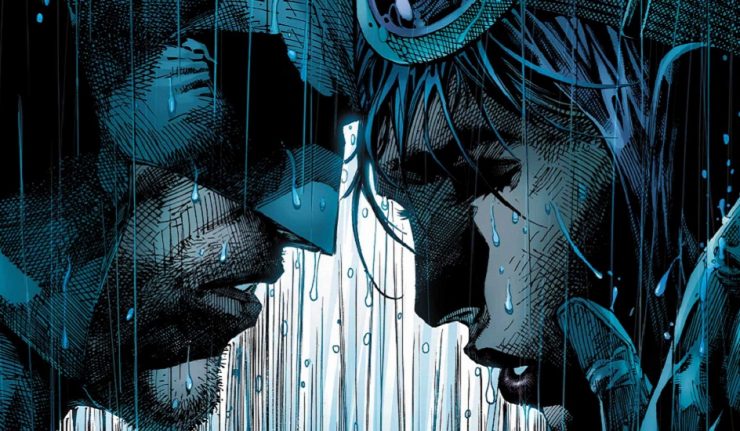 The wedding is finally here! The big day finally approaches as Bruce Wayne and Selina Kyle are to be married! The tux is picked out, the dress is ready and the location is set! Although something is definitely wrong! Will Bruce Wayne finally get some measure of happiness in his life–or will Selina reside back to her old ways?

Batman #50 really comes off as a homage to all the other writers and artists that have covered Batman over the years. In between the main story between Bruce and Selina we have smaller stories about their encounters over the years done by Frank Miller, Greg Capullo, Paul Pope and many more. It gives it the vibe of a multiverse look with each artist giving their view on Batman and Catwoman’s relationship over the years leading up to the big wedding day.

Instead of making a giant event, which is what I really expected, Bruce and Selina kept it simple and very intimate, choosing to wed on a Gotham City rooftop. King and Janin do an amazing job showing the optimism and joy that Bruce has on this occasion. Choosing Alfred as his best man and witness for the event, the two share a moment as Bruce reminds him that, although there’s Dick, Clark, and many more friends, the circle of trust always started with Alfred.

Selina, on her end of things, heads to Arkham Asylum to grab her witness, and she chooses her old best friend, Holly. Breaking her out of the Asylum and taking her back to the manor, the two along the way have a conversation about her change over the years and what her marriage might mean to the necessity of Batman. It seems that this very conversation leaves Selina with some doubts – and that leads to something worse.

My real complaint about the issue is the build up that we’ve had leading to the moment of a wedding taking place – and yet it doesn’t. King shows some panels where Selina is seen sitting on a rooftop, seemingly contemplating things. It’s at this moment where she suddenly dives off the rooftop into in the Gotham streets below, without hardly an explanation.

The next page shows Bruce, Alfred and the Judge still waiting, while Alfred tries to assure Bruce to be patient. However Bruce knows Selina–and he knows better. Bruce soon does the same thing, diving headfirst off the Gotham rooftops to places unknown.

Holly seems to be the wildcard here for some reason, as later she’s seen reporting back to Bane that everything has gone according to plan, while the mastermind is surrounded by a collection of Batman’s worst villains. It seems that Bane has hatched a plan to break Batman at his very core – and it’s working.

Batman #50 is a very enjoyable book, but I’m disappointed that King didn’t take a shot with Bruce and Selina finally tying the knot. The hype and excitement has been building for this for awhile and I’m guessing with Bane’s arrival there’s a long endgame that we’re gonna be seeing, but personally as a Batman fan I was looking forward into some more character development for Bruce, as well as Batman. It would be interesting to see Bruce hold the line as devoted husband on one end – while being a crimefighter on the other.

Also, I think Selina deserves it most of all. So many times we’ve seen her cross over from villain to hero and back again – isn’t time she gets more growth that shows that she finally has to make a choice between the two? I understand the need to give fans a twist now and then, but I don’t think it was needed for the wedding – although I hope I’m proven wrong.