It’s a time for introspection. A moment of clarity is coming to Scooby-Doo Apocalypse. The Scooby gang is holding things together with chicken wire and bailing twine, and something is going to give. Scrappy and Daphne finally meet on the streets and come to an uneasy understanding in the name of killing monsters. Velma admits that her managing style is the reason that her staff always needs her help and Shaggy shows her how she can fix the problem with a few changes. The changes developing in “The Unexpected,” have to be read to be believed.

Oh, and Secret Squirrel has nothing up his sleeve. You’ll see.

The book opens with eight pages of Daphne killing monsters. It’s a great series of panels that depict Daphne continuing her one-woman war against the creatures while engaging in an inner-monologue that reveals how she is processing the violence that she is committing. Daphne’s father George Blake and her deceased boyfriend Fred Jones were two men who played significant roles in her life. Coping with their loss is a part of her healing cycle. 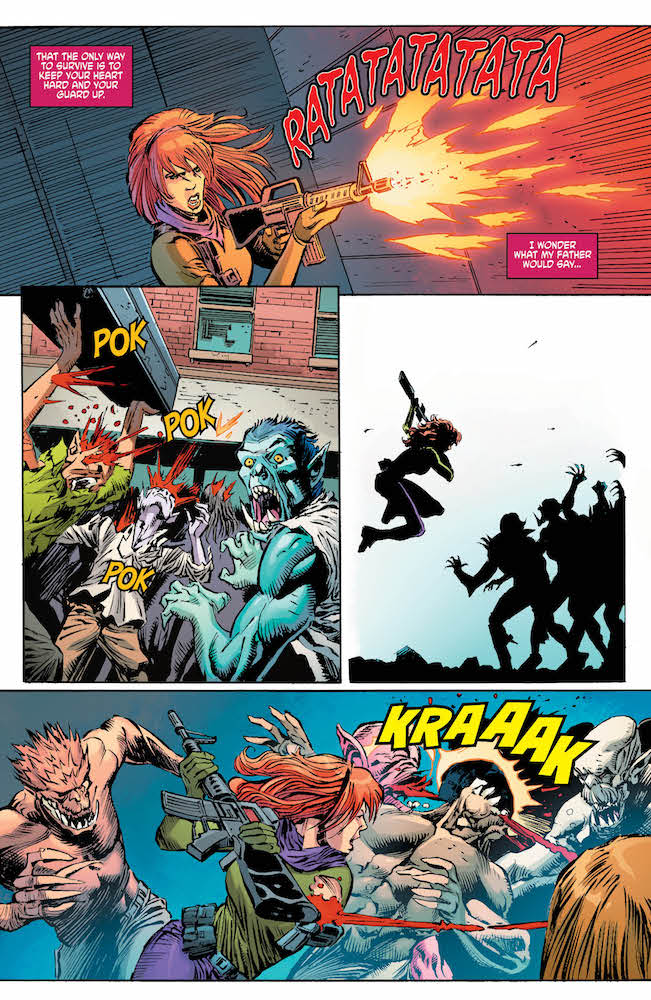 The pages are also an opportunity to show how proficient she has become killing mutations. It adds an extra layer to the doubt and suspicion when she meets Scrappy at the end of a skirmish. He says that once he fills his belly at the mall headquarters he’s bored, so when he heard about her hunting expeditions he decided to join the fun. He claims that hunting the bad guys is a shared hatred. Daphne counters that she is doing fine on her own, and I believe her. The pages leading up to their meeting are a perfect demonstration. When Daphne does agree to let Scrappy tag along, the only question that I had was about why we have not seen Scrappy on his own. In every scene, we only see him when he is interacting with a member of the gang. So, what is he doing when he is on his own?

Scrappy doesn’t let up on the idea of a team up. Eventually, Daphne steps back to let Scrappy kill a few monsters and he takes down at least five with enthusiasm. Daphne still doesn’t sound impressed. She’s not alone. 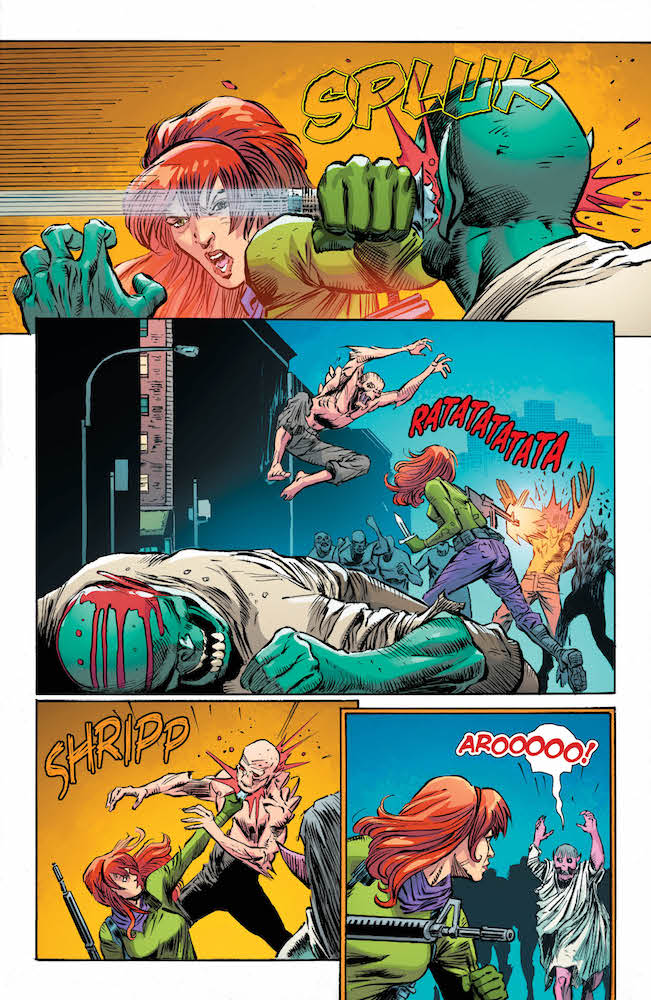 Velma and Shaggy have a great scene together. Velma is frustrated that her assistants are always bothering her for guidance. She wants them to be self-sufficient so that she can get on with her own work. But, whenever they do something she has a problem with the way it was done and then they have to do it all over again. This creates doubt about what they should be doing. Instead of acting, they approach Velma to make sure that they are doing what she wants before they get started. This makes her angry and then she lashes out. When Shaggy points this out to her she realizes that she can change her ways, and then decides to go back to what she was originally doing. Nothing better than a flawed character who knows right from wrong and still chooses wrong.

Fred is not dead! Yup, it’s true. They tease the idea at the end of page eight that Daphne does not know what happened to Fred’s body. Later, when Scrappy makes a comment about Fred, Daphne beats him to the ground until Scrappy apologizes. When she lets him up, Scrappy promises to not mention Fred Jones ever again. The final words are in a dialogue box on the last page of the story, where Fred is wearing a white shirt with blood stains, a red ascot underneath, and his eyes are glowing blue.

Regarding Secret Squirrel, nothing but positives here. I mean, it’s a story that makes fun of itself with an adult wink. Squirrel has the gang running from Mrs. O’s soldiers because he has nothing left up his sleeve to fight back. But when they get cornered, a force field pops out of Squirrel’s hat and jets from his boots. Feel free to laugh now, and again when you read it. 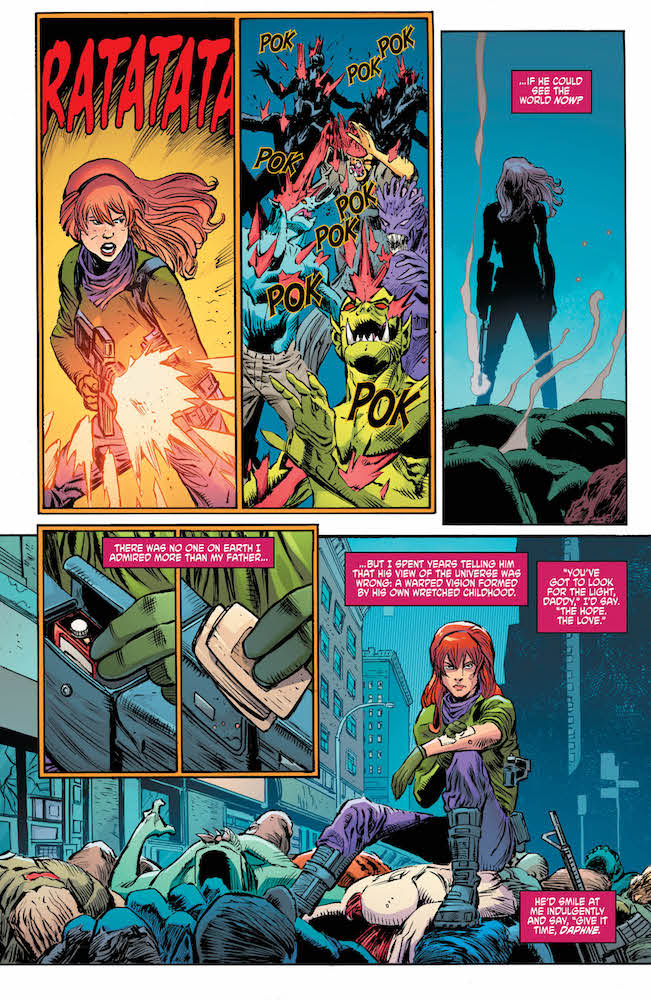 After killing monsters for seven pages, when Daphne pulls out two bandages to cover the wounds on her arm it diminishes the power of her actions. It’s superficial, and if it is meant to provide some levity, there should be just a line of dialogue to punch the joke home. Otherwise, it just feels weak.

Keith Giffen and J.M. DeMatteis have been writing for so long that they really know how to move the pieces into places where they can create the most tension. What I admire and love is that he does it with humor. Since the days of Justice League International, Giffen has used comedy to keep the tension alive, before he decides to draw the string tight. I can’t wait for that moment.