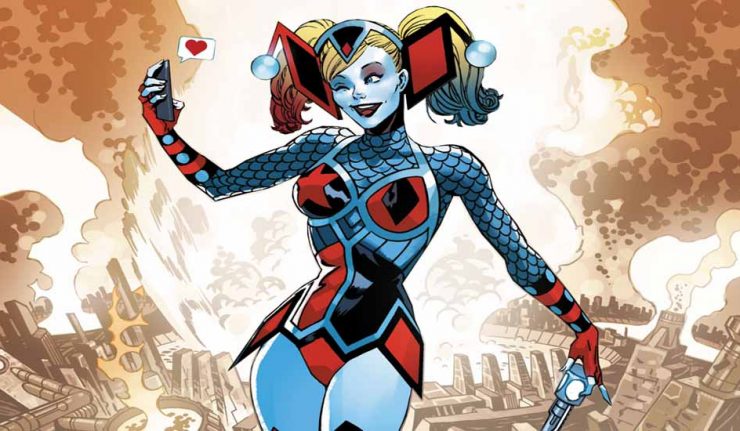 We might have some spoilers for you if you’re not caught up on Harley Quinn, so ya may wanna stop readin’ puddin.

The Fourth World was already a strange, dangerous, and surreal place. Then Harley goes and gets herself trapped in it. Harley accidentally left New Jersey and found herself in the firepits of Apokolips in Harley Quinn #45. Now things have only gotten crazier. In Harley Quinn #47, Harley finds herself going head-to-head with Granny Goodness that only results in sly comments on the cost of human oppression and jokes about “wrinkly bits.” It’s all part of a new direction that ties Harley’s 4th-wall breaking humor and the traditional DC Universe that began with writer Sam Humphries and John Timms hooking up.

DC Blog spoke with Humphries and Timm at SDCC where they discussed writer/artist collaborations, how you bring humor to Apokolips, and what the deal is with the comic-within-a-comic.

Sam, you’re new to writing Harley Quinn, but John has been drawing the book for a while now. What’s the collaboration been like between you?

SAM HUMPHRIES: It was a relief to me to hear that John was going to continue on the book because not only did I love his work and love his Harley, but if I screw up writing Harley, at least I know that John will make it look good! It won’t be entirely terrible!

The collaboration has been amazing. I like working in collaboration with artists, with a lot of back and forth, and I like working with scripts that leave a lot of room for decision making by the artists. I don’t want to speak for John, but I think the results have been really great—just really encouraging. I think with every script our collaboration evolves and grows as we figure out how to really push this book further and further.

John, how was it to suddenly find yourself working with a new writer after working with Amanda Conner and Jimmy Palmiotti for so long?

JOHN TIMMS: I worked with Jimmy and Amanda for something like three years! Then everything sort of rearranged with the new editorial team and Sam as our writer. But I feel really at home with the scripts that Sam sends me. It was challenging, but also kind of easy. I get what Sam wants from the story, and it’s really challenging, but I know where the story’s going and that’s really nice for an artist.

Of course, the first thing you did, Sam, was to send Harley to Apokolips. Where did that idea come from?

SH: Well, we knew right off the bat that we wanted to bring Harley the character and Harley Quinn the book closer to the center of the DC Universe, and what better way to make that statement than to send her to Apokolips, which occupies the center of the DC mythology? There’s nothing more “DC Universe” than a place like Apokolips.

I didn’t know it at the time, but we’re both huge Jack Kirby nerds. We both love the Fourth World, and all the work that Kirby did for DC in the ’70s and beyond. So, that was fun, being able to do the huge, bombastic stuff, but also contrasting that with Harley’s zaniness—her sense of humor and her left of center way she approaches the world. It really allowed Apokolips, and everyone who lives there, to be who they are. The characters who appear in Harley Quinn, they’re the same characters that appear in the other books. These aren’t different versions of them. But because we see them through Harley’s eyes, we get to see them in a brand-new light. We get to have a brand-new spin on these environments, heroes and villains.

Is it a challenge to take something like the Fourth World, which is usually pretty serious, and to bring some humor to it? How do you make Apokolips funny?

JT: It’s part of drawing Harley. You get the opportunity to go from the really crazy things to serious things. She can be very crazy in one panel, and very serious in another one. You definitely need to do some tweaks on the Fourth World, but I think at the end, the combination works really well.

Harley and Apokolips…and Granny Goodness! I really like their interactions.

Over the past five to ten years, Harley has become a pretty significant character within the DCU, and there’s a lot to her. She has her humorous side, but she can also be pretty violent. She’s a Batman villain and occasional ally, but she’s also on the Suicide Squad. How do you balance all of these sides of her?

SH: I see all of that as an advantage to writing her. All of the various incarnations over the years, from the animated series, to her early comic books, to the Arkham video games, the Suicide Squad movie, Amanda and Jimmy’s run—every one of those is a different set of brilliant creators looking at Harley and asking themselves, “What is the core of this character? What about this character is irreplaceable, where if you have it, you can go anywhere you want?”

We’re really standing on all their shoulders. So many amazing creators have taken Harley in so many different directions, and every time you do that, you come closer to what makes Harley Harley. For us, we’re really leaning into the fact that she has her crazy, zany side. She has her side that tells all the butt jokes. She’s got her violent side, the cartoony side, but then she’s also got a very strong emotional core to her. She’s a survivor. She’s been through so much in her life, and it grounds her and her emotions. Harley can get herself into all sorts of crazy situations, she can be in all these wild stories with all these zany people around her, but she’s always grounded by the fact that she has this emotional strength that can get her out of any situation she stumbles into.

Sam, on Harley Quinn, you’re following Amanda and Jimmy, who have really done a lot to help establish and define both the character and comic over the past several years. With your prior long-term book, GREEN LANTERNS, you were the one who really helped DC define who Jessica Cruz and Simon Baz are as characters, partners and heroes. What’s the difference in the approach?

SH: Well, as they say in football, that’s life in the NFL. That’s life in comics. If you’re working on superhero comics or any big licensed property in comics, you’re always building off of what somebody has done before. Even with Green Lanterns, it wasn’t just Simon and Jessica, it was the whole Green Lantern Corps and the mythology of the Green Lanterns and the emotional spectrum. On NIGHTWING, I followed Tim Seeley. On Green Lanterns, I followed Rob Venditti and before him, Geoff Johns with his huge, HUGE run that casts such a large shadow. Now, on Harley, I’m following Amanda and Jimmy. That’s just life in comics. That’s part of the gig, you know?

One thing that’s shown up in Harley Quinn since you became the new creative team is a series of comic pages that are drawn in a totally different style and are credited to an artist named “M. Clatterbuck.” What can you tell us about those? John, are those drawn by you?

SH: Exactly! One of the most amazing things about the first issue is that I challenged John right off the bat to deliver a page of a comic drawn in the style of “Dennis the Menace” or “Calvin and Hobbes.” Basically, an old-fashioned comic strip about a mischievous kid. Since then, we’ve seen a series of comic strips about Harley inside the Harley Quinn comic book. So, the question is, who in the DCU is making a comic book about Harley Quinn, and all we know about them so far is their name: M. Clatterbuck.

M. Clatterbuck is the most secretive, the most serious, the most elusive comic book creator of all time, and this is a mystery we’re building that leads into our giant-sized issue #50. It’s going to be massive. John is drawing a bunch of it, and then in the middle, we have an art jam. We have a bunch of superstar guest artists who we’ve not revealed yet, but who are jamming together. The story is that Harley Quinn destroys DC continuity. She’s going to destroy it and M. Clatterbuck is a huge part of that. You talk to a lot of other DC creators, right? You should probably ask some of them if they’re the real M. Clatterbuck, because somebody’s got a secret and they’re not fessing up!