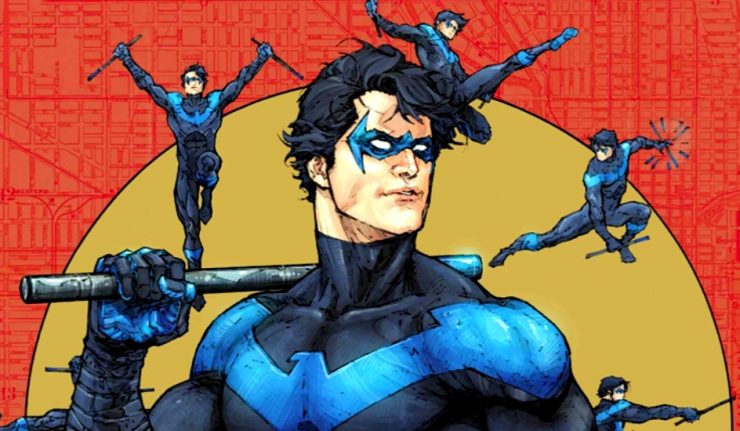 “HARM’S WAY”: PART ONE. Following hot on the heels of issue #47 and last week’s Nightwing Annual #1 this issue hits readers full throttle… in more ways than one. Trying to find a way to save his friends Willem Cloke and Vicki Vale from Wyrm’s cyberspace prison, Dick Grayson takes the Night Bus and Night Cycle to Ireland’s Isle Of Harm to compete in a cosmic road-duel for their safe return.

What can I say? This issue blew me away! Script, dialogue, art, color, lettering… the works. Writer Benjamin Percy and indie artist Amancay Nahuelpan have delivered 20 pages of high octane comics gold. The setting is Mad Max meets Highlander, and the atmosphere is the perfect fusion of hard sci-fi and comic-book carnage. Throw in a guest appearance from one of DC’s New Age Of Heroes’ most intriguing characters and you have a recipe for success.

The Silencer is a fascinating character, and pitting her against one of DC’s all-time greats is a stroke of genius. If you haven’t read any of her own comics series, then I hope that Nightwing #47 and #48 whet your appetite for more of Honor Guest’s adventures. For readers that haven’t experienced Silencer before now, think about how cool a concept a super-powered wife and mother is, and you’ll start to get the idea. She’s appeared in 8 issues of her own, plus one annual so far, all of which are well worth picking up.

Absolutely NONE. I’ve already said that the story’s terrific, but check out Amancay Nahuelpan’s incredible art (pencils AND inks!) coupled with the color work of the always exceptional Nightwing regular Nick Filardi, and you get a comic that looks as awesome as it reads. This art team along with veteran letterer Carlos M. Mangual have delivered a first rate issue that is still clearly part of the ongoing story, but gives readers a fresh new angle all its own.

I’m almost sad that this particular creative team is only handling this issue and the next. Thankfully we know that writer Benjamin Percy is sticking around for a while, but I’m itching to see more of Amancay Nahuelpan’s gorgeous art. The conclusion to this chapter has revved up my engines, and I just want to hit the gas and zoom ahead four weeks to see how this all plays out.

What a terrific issue.