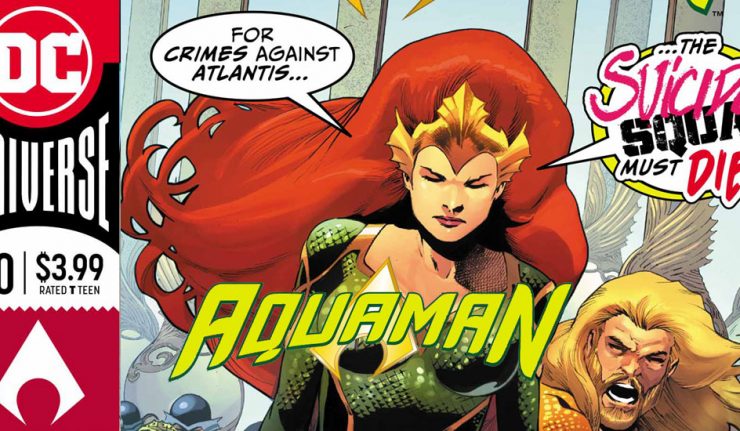 Sink Atlantis Finale!  Satanis and the members of the Suicide Squad have infiltrated Atlantis. Satanis reaches the Silent School and accesses the secret magic. Dolphin finds an opening to attack Satanis and King Shark takes on Killer Croc.

Aquaman is able to reach Satanis in time to save Dolphin. But Satanis has already activated the magic enhanced, nuclear bomb. It’s up to the new Suicide Squad recruit, Master Jailer to stop the bomb. But even if he can the relationship between the United States and Atlantis could be permanently damaged.

This was great ending to a fun arc. In this issue we get to see a Killer Croc and King Fish battle and best of all we see the most unlikely of men show what the true meaning of hero is.  Master Jailer stands out in this issue as a man caught in the wrong place at the wrong time. But when he rises to meet the challenge by the end of the issue, you can’t help but like the character.

There were a couple things that troubled me with this issue.  First off, since Suicide Squad plays an important role in this arc, there is plenty of Harley Quinn in the issue. But her humor throughout the book doesn’t feel natural and the jokes feel either out of character or forced.

But my primary concern with this book isn’t just this issue, but the entire run since Rebirth started. This is issue #40 and Aquaman, the character whom the entire series is named after is once again not the hero of the story. I’m not sure what’s happening at DC Comics, but this seems to be a new trend.  In The Man of Steel by Bendis, Supergirl was the hero of that story which I found to negate all the hype about Bendis taking on Superman. Then in Aquaman, Mera ended up winning the day in the last arc. Before and during that arc, Aquaman was a sad, weak, poor example of a superhero or a leader. Now the writer has the opportunity to get him on top again and yet again decides not to. Why are these writers scared of having the male, titular characters being the heroes they’re supposed to be? When audiences read an Aquaman book, it would be nice if it was actually about Aquaman.

As a single issue, it was a decent end to a fun arc. It was great to see the Suicide Squad utilized as a strike force against Atlantis. But my concern is that an overall title, Aquaman is quickly losing my interest. I still suggest this title to new readers, but I think the New 52 Aquaman is a much stronger sample of what this character can be.

Suicide Squad #22 Review – Light at the End of the Tunnel