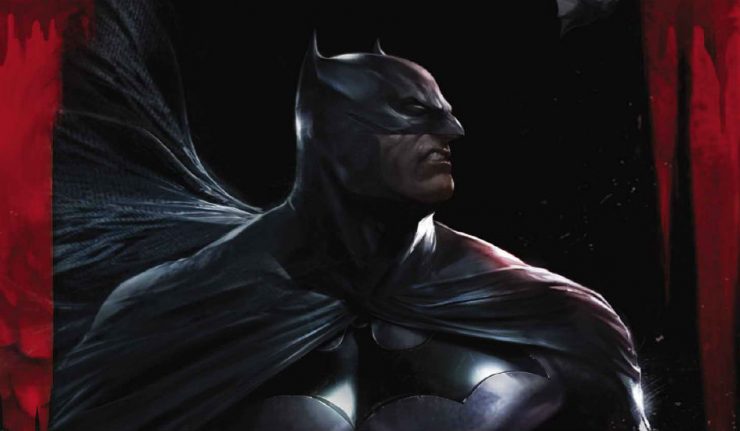 King doesn’t do subtle in this book at all–and I loved every page of it! Batman is on the hunt for KGBeast–the man responsible for shooting Nightwing on the rooftop of GCPD! Using almost every resource and connection he has, Batman is hot on the trail of the hitman–who seems to be more of a ghost than anything. As he collects his information, Batman either questions–or interrogates each person he comes across. My favorite scene involves Kanto of Apokolips who’s actually captured Batman. As Kanto goes on and on about different torture techniques, Batman suddenly interrupts him and informs Kanto that Orion and Granny Goodness are both still after him–and Batman can easily give away Kanto’s location! Kanto immediately gives Batman the information he needs–fearful of a boom tube from Apokolips.

What negatives? Where? You won’t find it in this issue! King actually shows us two sides of a coin in this issue as we see Batman question and interrogate on one end–while KGBeast is having drinks with his father on the other. The conversation between KGBeast and his father is quite sad, but at the same time very disturbing. Personally once hearing the truth from his own father, a part of me felt sorry for KGBeast myself. It seems that KGBeast’s upbringing is really responsible for the man he is, and as his father makes a somewhat touching remark KGBeast suddenly shoots him. It’s at this very moment that the villain hears the sound of snow being shuffled at his door and that’s when he realizes–Batman has found him.

Batman #56 is a great read! Plenty of action and emotion, and you really feel sympathy for Batman and even KGBeast to a certain degree. Daniel does an amazing job of making Batman so realistic in this issue. You see the tatters in his suit, the unshaved face and you know he’s been working for nights on end to find KGBeast. When the issue ends we find Batman on a trek through blinding snow to KGBeast father’s cabin where I suspect next issue we’ll see Batman seek justice!