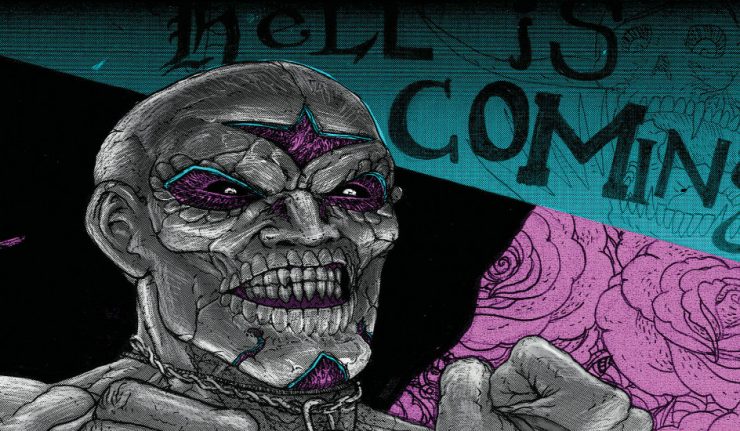 During this monthly trip to Devil’s Fork, we learn more about Julietta’s legal status. Turns out it more heartbreaking that originally thought.  Just when you thought things could not be harder for the kids in this book, there is another kick to ribs. There is a school assembly with Sheriff Hernandez who wants to teach the kids to be SAFE. Serious about finding emigrants. Ug.

Finally, as if that wasn’t enough horrible nonsense, the gang accidentally opens a portal to hell. It is only Aztec Hell, but still, Hell. So, you know, good times.

So, here is something that made me laugh so hard that I had to cry because it was painfully true and disturbing as there are people out there in the real world saying these exact words:

“While the liberals in Washington stall the President’s wall between our peaceful oasis and the Bad Hombres across the border, you kids lie vulnerable.”

“God, It’s like a Hitler Youth Rally had a baby with the prison riot from Natural Born Killers.”

Mic drop Mr. Esquivel. Seriously. If you only gave me those two lines and you had Ramon draw only that page, I would give this issue 5 stars. Luckily, there is so much more going on here like, the rest of the art and the plot moving along beautifully and at the perfect pace, and the crazy stuff that is going on with Blake. What?! Come on. Seriously? Wow. I am not going to say more because honestly, I already feel a bit bad about spoiling the whole Aztec Hell angle of this.

OK, it would actually be the way this team is making us really understand each character. Each issue so far has been focused on one member of the “team” while not neglecting the others. In four short issues, I feel like I really know these kids and I want to root for them.

Plot is important, but characters matter most and this book is just flush with interesting, thoughtful characters, who happen to be in a smart and inventive plot. I totally understand why this series needed a reprint.

If you noticed I said I would give this book a five star rating based on one page, so I have nothing to complain about right now, and neither should you.

Look, spend the money on this. These books are going to be hot items for a long time to come. You can not lose. Excellent art. Whip smart writing. A Plus. Tell your friends. Don’t keep this to yourself so you can be the person who read it first.