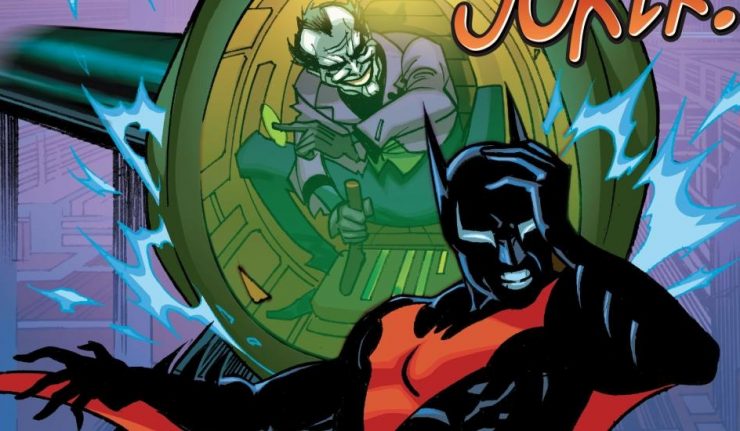 The Clown Prince of Crime amasses his own army, and there might not be enough of Batman and Robin left to stop them. The only thing more dangerous than The Joker is a city full of weaponized Jokerz being pointed at Gotham, led by the Clown Prince himself! With his old nemesis firmly back in play, retiree Bruce Wayne becomes obsessed with bringing him down. But does he have enough in the Bat-tank? And what happens when Gotham’s terrified citizens start backing The Joker’s play?

The Joker has returned with a stated agenda to return the futuristic Neo-Gotham to its Gotham City days when it was “Dark. Creepy. Covered in muck and blood and guts and crime.” In keeping with this, he continues killing off members of the Jokerz, but has apparently recruited a few of them as henchmen, dubbing them “The Throwbacks.”

But despite his distaste for the new, Joker sees the need to use modern technology to pit against the tech used by Batman and Robin. Thus he makes one of his Throwbacks into a cyborg monstrosity which he names Joker Beyond.

This name gives the fourth wall an amusing nudge without actually breaking it, as Terry is never referred to as Batman Beyond in either the cartoon or the comics. He’s just Batman. So, the Joker doesn’t realize the full significance of the name.

It seems that Terry has decided to pursue a relationship with Melanie (formerly Ten from the Royal Flush Gang) instead of patching things up with Dana. We see the two having a brief romantic interlude before Terry has to rush off to deal with the Joker.

Dick Grayson is still hanging around but unfortunately, he isn’t being used to great effect – at least not in this chapter of the storyline. Both he and Barbara are shown together in the Batcave together, not a word is spoken between them about their shared past. As one of the most interesting romantic relationships of the DCU, I’m sure many readers are dying to know why they didn’t end up together in this future timeline. C’mon, could you at least drop us a hint or two?

Similarly, little is said between Dick and Bruce about how they ended their partnership or why Dick gave up his crimefighting career. Dick’s only function in the story seems to be to berate Bruce for encouraging Matt to be the new Robin. In fact it seems somewhat out of character for Dick to be so against there being a new Robin and Bruce for it, when you might expect each to be on the other side of the argument.

Batman Beyond is still one of the most interesting of the Bat-Family of books. Part of the draw is that it is decoupled from the continuity of the main DCU, so no character is safe from being killed or having their status quo permanently affected. And with the Joker bent on reprising his triumph for A Death in the Family, Matt’s future looks to be rather grim.