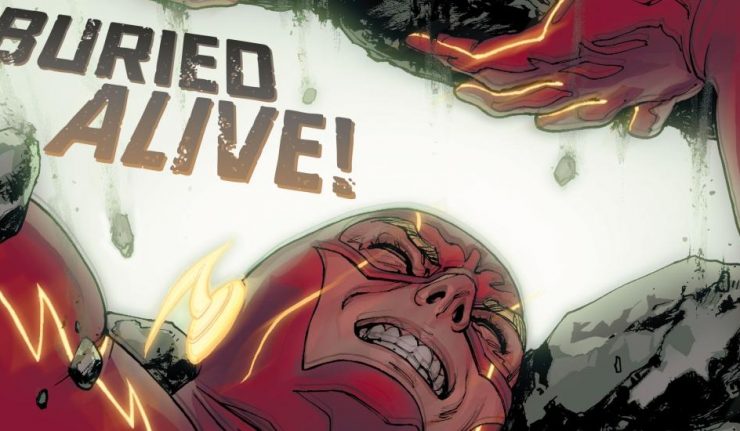 Powerhouse looks to turn the Scarlet Speedster into a scarlet skid mark! The two Force wielders find themselves at odds when Alexa wants to overthrow the criminal government of Corto Maltese that’s crushing her people. (Remember that locale from THE DARK KNIGHT RETURNS?) Barry must quash their beef and convince Powerhouse to join his Force Quest if he ever hopes to learn the secrets behind these new Force powers!

Barry hoped to learn more about the different Forces from Fuerza, but comes to the realization that she is just learning herself. But that doesn’t mean that neither learns anything. The Flash show Fuerza how to access her gravity powers and she offers Barry a parting piece of advice: “If you wish to survive this Force Quest, you need to let go of everything in your past.” Whether this will prove to be true remains to be seen, but maybe to succeed in his quest will require a sacrifice of something Barry is clinging on to.

Barry and Iris then move onto the fictional DC country of Zandia, which serves as a haven for supervillains. To blend in, they disguise themselves as villains to find the new Sage Force avatar, Psych. Psych has the ability to bring one’s worst fears to life, which quickly reveals to Psych that he’s really the Flash. However, Psych surprisingly greets Barry warmly instead of with hostility.

I also like that Iris seems to be making a contribution to Barry’s quest rather than just being along for the ride. Her knowledge about the Forces from her pre-Flashpoint memories helps her analyze a Sage Force-powered weapon and she also comes up with the idea to pose as supervillains. I also found it interesting that this is not the first time Iris has done so, as revealed during a brief encounter with Magpie.

Although the hectic pace of the story arc seems somewhat fitting for a speedster character, I can’t help feeling that things are being rushed a bit too much. Barry hardly has time to help with one crisis and meet new friends before he and Iris are rushing off to the next stop on his tour. I realize that his Force Quest probably has a set number of issues before it reaches its conclusion, but it seems that spreading the story over another issue or two might help the pacing of the story.

The Flash has always been one of my favourite heroes, whether it was Barry or Wally wearing the costume, and it’s good to see Barry working to reaffirm that the Flash is indeed the Fastest Man Alive. With this as the stated goal of his Force Quest, it should be fascinating to see if Barry succeeds in doing so as this storyline continues.