Wonder Woman versus…Booster Gold?! Diana finds out the hard way that Booster can be a formidable opponent when his back’s against the wall. Of course, being the prime suspect in a superhero massacre and exposing a secret trauma hospital for metahumans will do just that. Meanwhile, Batman and the Flash combine their detective skills to investigate what went awry at Sanctuary and uncover a serious glitch in the system—not to mention an explosive, spoiler-ific secret!

Generally, Clay Mann’s art continues to be very strong. There’s a nice level of detail that allows a lot of emotion to shine through. And with Tomeu Morey’s colors, it just looks good.

I like the inclusion of Batgirl as a, hopefully, major player in these events. Her part of the story could be potentially interesting when explored further.

I find the cover to be very unappealing. Beyond the graphic nature of it, I just don’t like the style. It’s too ragged. I get what it’s going for but I don’t think it fits with the more somber tone of the book. 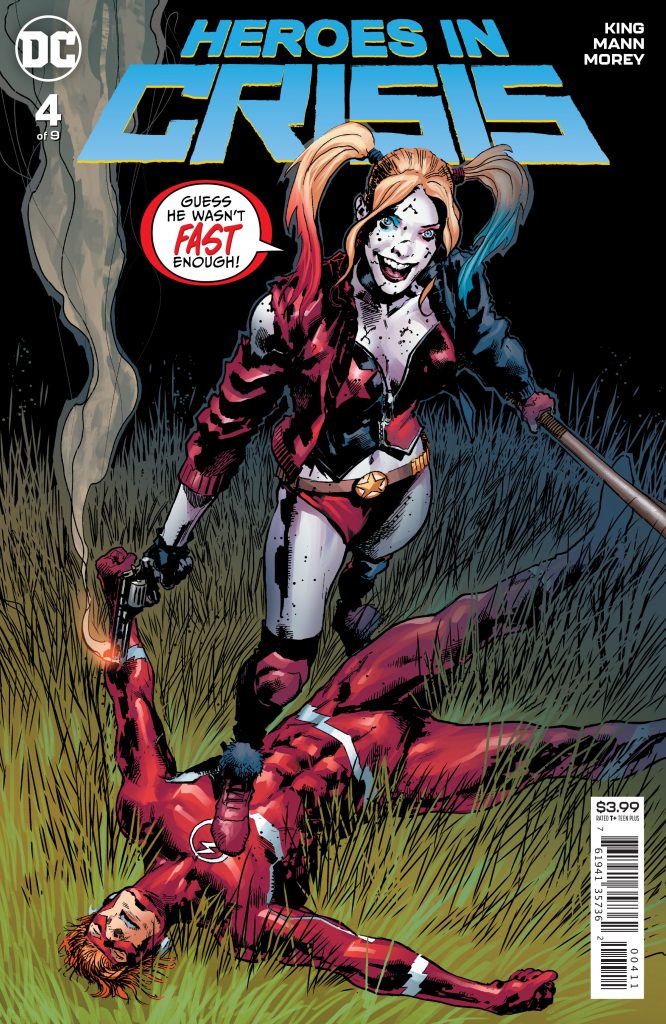 While generally do love the interior art, I’m not a fan of how the women are drawn in certain parts. There are moments of overt sexuality that do not belong at all. The big one is an entire page dedicated to Lois Lane wearing nothing but a Superman shirt. If this scene was intended to be sexy and romantic, I would actually be okay with it. But it’s a really serious scene about the potential consequences of the Sanctuary confessions becoming public. And Lois Lane spends the entire scene posing half naked; it’s distracting and tonally inappropriate. There’s another moment in Batgirl’s confession; it’s one of the more powerful moments of the entire story so far. She doesn’t have any kind of sad speech; she just points to the bullet holes. And the last panel is her detailed butt posed in a weird way. These moments take away from the serious nature of this story.

There is way too much in this issue. I understand the intent is to show how big of an impact Sanctuary had and will have by showing different elements of the world. Additionally, it’s an event which typically try to bring in as many characters as possible. But there’s no focus. I felt like I had whiplash reading the issue. Certain moments are pointless. There’s a Donna Troy confession that adds nothing and a Black Canary one that, while very funny, also adds nothing. But that one also reminds me that I wish this story was at least partially about Green Arrow and Black Canary since Roy is one of the main deaths.

I did not enjoy this issue. There are great ideas and moments that I latched onto but there’s not enough here. I don’t know what’s driving this story. The tonal inconsistencies created by strange artistic choices only make it worse. I need this story to have more of a focus because it feels like it’s all over the place right now.