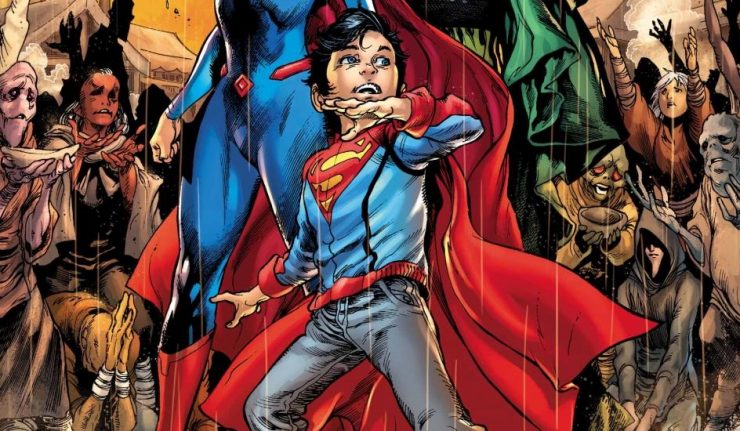 It’s the moment you’ve been waiting for: the shocking return of the son of Superman! A year spent traveling the stars changed Jon Kent. Are parents Clark and Lois ready for the all-new, all-different Superboy? Secrets are revealed, a new look debuts and Superman’s world is changed forever!

I have very mixed feelings about this issue. I very much dislike some of the directions that Bendis is taking with some of the characters. But despite this, this was an extremely well written story. In fact, it’s Bendis’ best Superman story to date.

As we saw at the end of issue #6, Jon has returned to Earth, but although only three weeks has passed on Earth, seven has passed for Jon. While I am not happy with this development, it was handled extremely well. Both Clark and Lois’ reactions to this revelation are understandable and very human.

Clark’s first thought is to suspect Jon has been affected by some variant of Kryptonite or that a villain caused the change. Lois echoes her husband’s reaction: “Is it one of those @!#$#@ Kryptonites again?”

Speaking of Lois, we get an amusing moment where she assumes that Superman has come for a romantic encounter, and starts to disrobe, not realizing that Jon is also present. Luckily, Clark quickly covers their son’s eyes, saving Jon from being traumatized.

We also see Jon’s have an encounter with Lobo, where the bounty hunter tells Superboy that he’ll be a man when he decides to be, rather than when he reaches an arbitrary age. Could this be hinting that perhaps instead of sharing the name Superboy with the recently returned Conner Kent, that Jon might instead choose to share the name Superman with his father? Or more likely, some other identity that doesn’t contain the word “boy”?

We also finally see why Lois was content to leave Jon in care of his grandfather Jor-El and return to Earth. When she sees Jon single handedly taking on the Khunds to save Daxam, Lois realizes that her son is quite capable of standing on his own two feet.

Also, Jon drops the bombshell that he believes that Jor-El is “completely insane” and that they need to do something about it. When Mr. Oz was first revealed to be Jor-El, I suspected that he might be some alternate Jor-El from another universe or timeline. This revelation has strengthened my suspicions, and I think I know which version of Jor-El he is. My guess is that this is the Jor-El of Earth 3, making him the father of Ultraman.

I really hate that Jon is suddenly 17 years old now. I very much enjoyed the family dynamic that Tomasi captured so beautifully in this title’s previous incarnation. With Clark and Lois semi-separated, and Jon now almost an adult, this leaves the Kent family with a very different dynamic. And now that Jon has returned, will the Kents try to restore some semblance of their prior family life? Somehow, I suspect that Jon will end up going his own way to prove himself, while Clark and Lois will continue their current arrangement.

And this development really messes up Jon and Damian Wayne’s team-ups as the Super Sons. It worked well with them the same approximate age, but will they work as well together, now that Jon is much older, experienced, and bigger than Damian? There may be some story potential in dealing with these changes, but I preferred the Super Sons as they were.

Despite my distaste for the major changes to Jon, his return is very welcome. And the reunion of the Kent family made this a very emotional and well-written issue. I may not like the changes that Bendis has introduced to the Superman mythos, but if he can maintain this level of excellent writing, that will go a long way towards making these changes more palatable.

I’m giving this story a rating of 4. If I was rating it on terms of the story and art alone, it would have been a perfect 5, but I have to dock a point for the changes made to Jon.