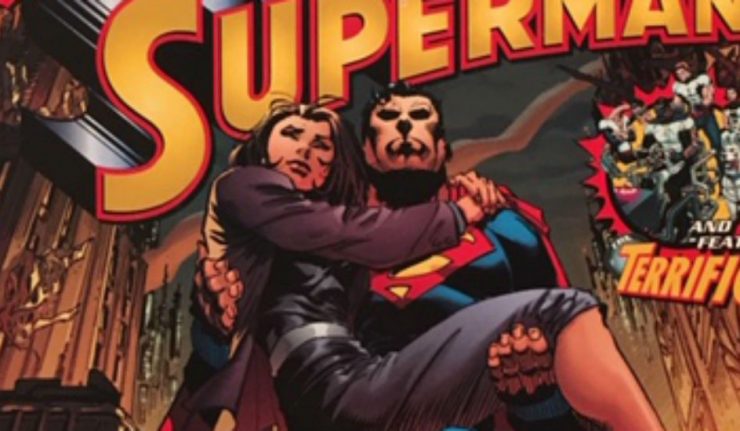 Every had a loved one not answer a phone.  I mean, you KNOW they’re home, right.  I mean, hey, just text back, “I can’t talk right now.”  It’s not that hard is it?  If you’ve ever been in that position, then you have an idea of what Superman experiences in Chapter 5 of “Up In the Sky: The Thousands Deaths of Lois Lane.”

Last issue Superman had an emotionally draining meeting with the family of the alien who sacrificed himself to save Superman’s life.  It’s only natural that after this extended time in outer space that Superman would want to talk to Lois.  But, how?  In a creative and unique way, Tom King introduces the reader to a system of intergalactic telephones.  They clearly aren’t actual telephones, but they work as such.

As Superman waits with others attempting to call loved ones from whom they are far away, Superman’s mind begins to wander as he fails to get Lois to pick up.  As one is wont to do in this situation, he begins to imagine what could’ve be preventing Lois from picking up.  With the exceptional lives they lead, Superman is well aware of the trouble Lois could get into.  Hasn’t he saved her from numerous explosions, plane crashes and super-villain attacks throughout the years?  It’s way more dramatic than the average husbands thought of “is she lying dead in a ditch on the side of the road?” However, the sentiment is the exact same.

Finally, Lois picks up and well, boy was she busy.  The issue ends with an emotional exchange between the two that unfortunately is interrupted by another emergency Lois must cover for the Daily Planet.

King puts a lot of emotion and character into a story about waiting for someone to pick up a phone call.  While the main action takes place in Superman’s own mind, it reveals a lot about Superman and Lois.  It is an incredibly humanizing story, because there’s probably no spouse alive who hasn’t had similar concerns.  Superman and Lois have extraordinary lives, so it’s expected Superman’s doomsday thoughts are just as extraordinary.  Cleverly, King is able to use known situations from previous comics in which Superman successfully saved Lois Lane.  It’s morbidly funny as Lois and Jimmy Olsen die in a plane crash as Jimmy confidently states that he’s “Just signaled Superman with his watch.”

Kubert and Hope wonderfully convey all of Superman’s worry and concern as he waits and waits and has to listen to the other stories.  Some of them are mundane, and some sound so bizarre that one can’t help but laugh.  These moments do a lot in breaking up Lois’s horrible death moments.

This story, perhaps, provides single most relatable real world fear that everyone has about their loved ones.  It shows how Superman really is just like us.  Knowing King’s previous career (CIA), I’m sure Mrs. King had many worries about her husband.

This issue also contains reprints from Superman/Batman #7, Green Lantern #7 and The Terrifics #7.

At this point I’m sure everyone’s heard about the controversy over this story, not that it occurred to me…, but that’s it folks, this is a winner.

It’s not often a Superman story focuses on the relatability of the Man of Steel to the average human, but this it it!  It wonderfully fits into the overall narrative and allows some real moments of reflection for the reader as the plot has pushed forward over the first four installments.  Nearly to the halfway point, this moment not only shows the human side of Superman, but prepares to launch him into the end run rejuvenated and ready to be the best Superman he can be!  Stories like this are why Superman Giant continues to be the best Superman comic on the market!