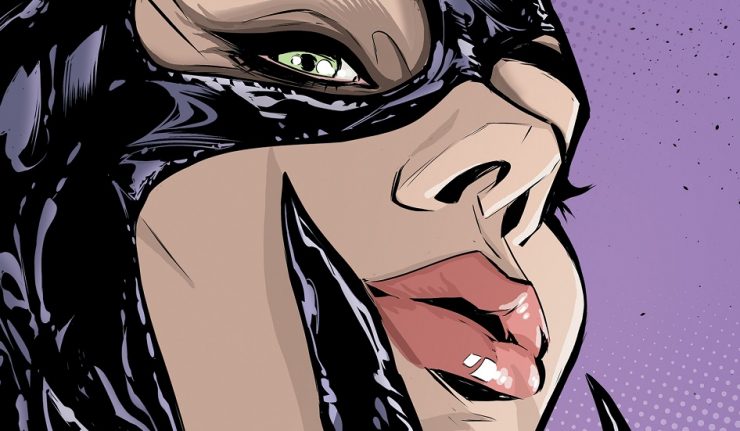 While Selina Kyle aggressively negotiates and succeeds in getting new earrings for a lesser price, Oswald Cobblepot, aka The Penguin, arrives at Villa Hermosa airport. Selina later gives her still-comatose sister Maggie settled in their place before heading out as Catwoman. Elsewhere, Raina Creel travels incognito to acquire more botox surgery against regular protocol. At Villa Hermosa Pier, Penguin’s men set off explosions on the ferris wheel and other locations to draw Catwoman out. Lured into the carnival’s aquarium where she easily overpowers Penguin’s goons, Selina stands face to face with Cobblepot, who offers her a seat. TO BE CONTINUED…

What works is that this issue starts out as the next chapter as opposed to a continuance of the mess Selina managed to work her way out of. The fact the jeweller enrages her with the word “husband” carries a coin toss in its meaning; Is she angered by the sexism, or because she walked away from her marriage? And the fact that Penguin himself was part of the underlying plot of Bane that derailed that path of happiness for them both (read Batman for more) is too coincidental. If this is taking place after the recent few issues of Batman, is Cobblepot still looking for protection from Bane for flipping on him? The cover is very telling as to what he wants Selina for, or is that a possible dodge? The silhouette image of Oswald offering that chair is very ominous and carries multiple connotations. This is the same man that is insane enough to kill his driver for talking too much. The design of him with the bald head harkens back a little to Danny DeVito’s interpretation of the character in Batman Returns, which makes this a very interesting get-together since Michelle Pfieffer’s Catwoman teamed up with him. Joelle made the right decision to have Maggie in Selina’s care with her new support base. They will be an anchor for her antihero status; they are what she is fighting for in this new phase in her life. Speaking of loose ends, while a minor appearance, seeing Raina Creel at rock bottom felt very satisfying after all the crap she pulled for Selina’s new life. Her face is truly horrifying to behold and the fact she’s not in jail herself also demonstrates her level of influence.

It took me a few reads to get the gist of what’s going on. The writing felt a little off at certain points and I missed Joelle’s artwork. Perhaps that’s the reason. I’m not saying Elena’s art is bad; it’s just that after six issues you’re used to seeing the original artist’s figure construction and use of inks and shadows. While her figures are good and in no way a departure, Joelle established her voice through both her art and her script for the first six installments and Elena’s just feels like a filler. The fight sequences also felt too confined and too static. And although I made note of Raina on the lam being a positive, I would have liked to see how she managed to stay out of prison.

While I like how they’re trying to reconnect Selina to the overarching Batman plot, it’s the art that threw me off slightly and loose ends like Creel. Overall, the second part might prove me wrong, and I will gladly recant any slights that I misjudged, but when you have a creator that’s both writer and artist on a book, you expect that same quality after a six-issue arc. When a new artist takes over, the different visual aspect of the book affects the writing slightly and this can either be good or bad for a book depending on the quality of the plot itself. In any case, I’m looking forward to seeing what Penguin wants with Selina and how it will affect her life in Villa Hermosa.