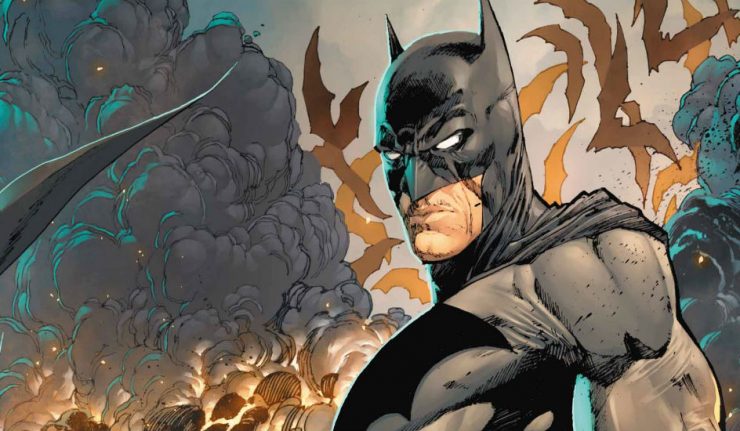 Bruce and Selina are now married! As the two run across the rooftops of Gotham as Batman and Catwoman, Bruce’s life seems almost complete–that is until John Constantine appears! Just what exactly is John trying to warn Bruce about?

Anytime John Constantine and Batman get together I love it! The conversation between the two is usually pretty funny with Batman always being so serious and John often being witty. However this issue takes a slight spin in the beginning with John showing up to warn Bruce on his wedding with Selina. John tells Bruce that there’s something completely wrong with everything that’s going on here, but Bruce refuses to listen. As the book goes on, John begins to appear in more and more odd places, and although he’s a master of the magic arts–showing up in Bruce’s bathroom probably crosses a line! It’s a pretty funny moment as Selina’s in the shower and she asks Bruce where the smell of cigarette smoke is coming from!

I have no negatives about this issue. Throughout the entire time as the book progresses you notice that John references the word “dream” over and over to Bruce. It’s something I didn’t notice before, until John tells Bruce that a tragedy is coming–and there’s nothing he can do to stop it. Bruce tells Constantine that he’ll always protect Catwoman, and that no harm will come to her–but ultimately it’s a promise he can’t keep. As Selina dies in Bruce’s arms John tells Bruce that is all a dream that he can’t wake up from–all he’ll do is drift from one dream to the next. Bruce asks John Constantine is he here to help get out of it at all, and John’s response only replies that things are worse–he’s not real. John Constantine is apart of the dream too! John tells Batman that’s he’s strapped to machine by one of his enemies with the intention of driving the Dark Knight insane–and it just might work!

Batman #63 is a good read and very enjoyable. Here Bruce lived out one of his saddest moments–the day Selina didn’t show up for the wedding. It was good seeing a “what if” issue of how Bruce and Selina could’ve been. I can’t wait to see exactly where the next issue takes us!