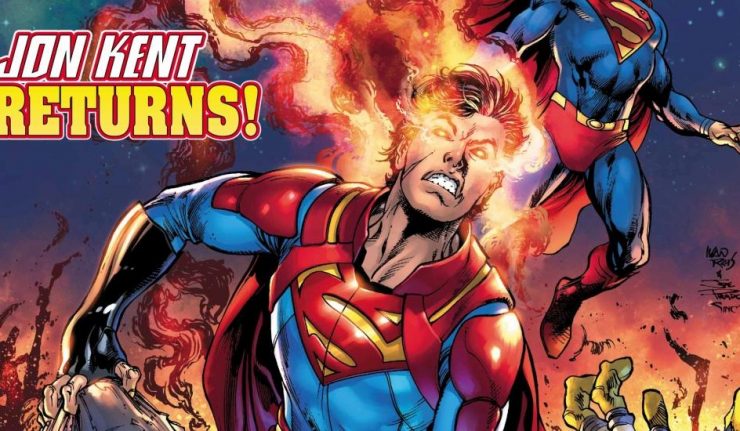 The epic secrets of Superman continue to unfold! A few months in space with his paternal grandfather Jor-El changed Jon Kent forever. With Jon now seeking help from his father, the Man of Steel must learn about the war his son and father fought together and set right the wrongs his father may have unleashed on other worlds. See what changed Superboy in such radical ways as the Unity Saga continues.

Jon Kent continues telling the story to his parents of the lost six years he spent exploring the galaxy with his grandfather Jor-El. I think the most true-to-life thing about this issue is the frustration and anger that Lois and Clark feel over the fact that they have been robbed of seeing their son grow up. Although Superman tries to remain above looking for someone to hit, he is relieved to find Mongul step up to receive a thrashing.

Jon maintains that he feels Jor-El is insane, and the his tale definitely indicates that Jor-El is (or was) suffering an existential crisis. This does seem to make Jor-El a somewhat tragic figure. He had dedicated his life to science – cataloguing and analyzing reality to make sense of it. But the events of his life following his resurrection by Doctor Manhattan have left him believing that there is no sense to the universe, only chaos. He is questioning the very foundations of his own understanding.

We also get a guest appearance by Green Lanterns Arisia and Kilowog, which reminds us that Jor-El and Jon are still in the DCU, even if they are far from Earth. It also triggers an awkward moment, when Jon asks them to return him to Earth, only to have Jor-El overhear the conversation.

During Jon’s story, he is shown wearing a new Superboy costume, which I quite like. In fact, I wish he had kept this costume instead of the new one he is wearing in the present as he recounts the story. The current costume seems too much like armour, while the earlier costume appears to be a more iconic traditional superhero outfit.

Also, the story ends with Jon coming face-to-face with Ultraman and the Crime Syndicate of America. Since Mr. Oz was revealed to be Jor-El, I have suspected that he is not the DCU Jor-El, but his doppelgänger from the universe of Earth-3. Their appearance here isn’t conclusive proof, but I think the chances of my theory being correct just increased significantly.

Perhaps Jon’s later experiences that he hasn’t describe yet are colouring his recollection, but he seems to be jumping to conclusions about Jor-El’s sanity. Clearly his grandfather is troubled, but it seems a bit of a stretch to decide on the basis of one awkward conversation that he’s “stuck with a crazy old man.” I expect that as the story progresses, it will become clear that Jor-El is definitely off the rails, but I think Jon might have been a bit hasty to make that judgement that early in the story.

And one bit of dialogue confuses me. When Jon is discussing the size of the galaxy, he tells his mother, “The galaxy is so big, Mom. Like, really lort gin, big.” What the sprok does “lort gin” mean? Is it some new slang teenagers are using? An interstellar profanity Jon picked up in deep space? A typo? Neither Google nor UrbanDictionary.com could shed any light on the meaning of this phrase.

While I still don’t like the change in status quo for Jon, I still find the story of how it happened to be quite fascinating. I find that I am enjoying this story even though I am not sure that I want to. This puts me in the unique position of liking the story, yet hoping that it gets negated or retconned away. But for now, I’m content just to see where Bendis is taking Superman and his family.