After reuniting, the team must come to terms with their next steps. Starfire is determined to find Tamaran, Jessica Cruz thinks this is a job too big for the four of them and wants to get backup, Cyborg knows Darkseid’s plans with the Other Box and needs to stop him, and Azrael is insistent on bringing order to the Ghost Sector’s chaos. Where will the team go from here? Can Darkseid be stopped? Find out in an all new issue of Justice League Odyssey!

Comics are brought to life by a sense of purpose. Saving the day, fighting bad guys, and protecting the universe is one thing, but there needs to be a reason behind it all in order to succeed in a comic. For a while, it seemed as though Justice League Odyssey was wandering aimlessly. There was no clear reason as to why Cyborg, Starfire, Jessica Cruz, and Azrael had to be chosen to protect the Ghost Sector, why they were worshipped as old gods, or why Darkseid’s plan mattered. With Justice League Odyssey #6, however, Dan Abnett takes the helm with a bit more focus and breathes new life into this lost series. 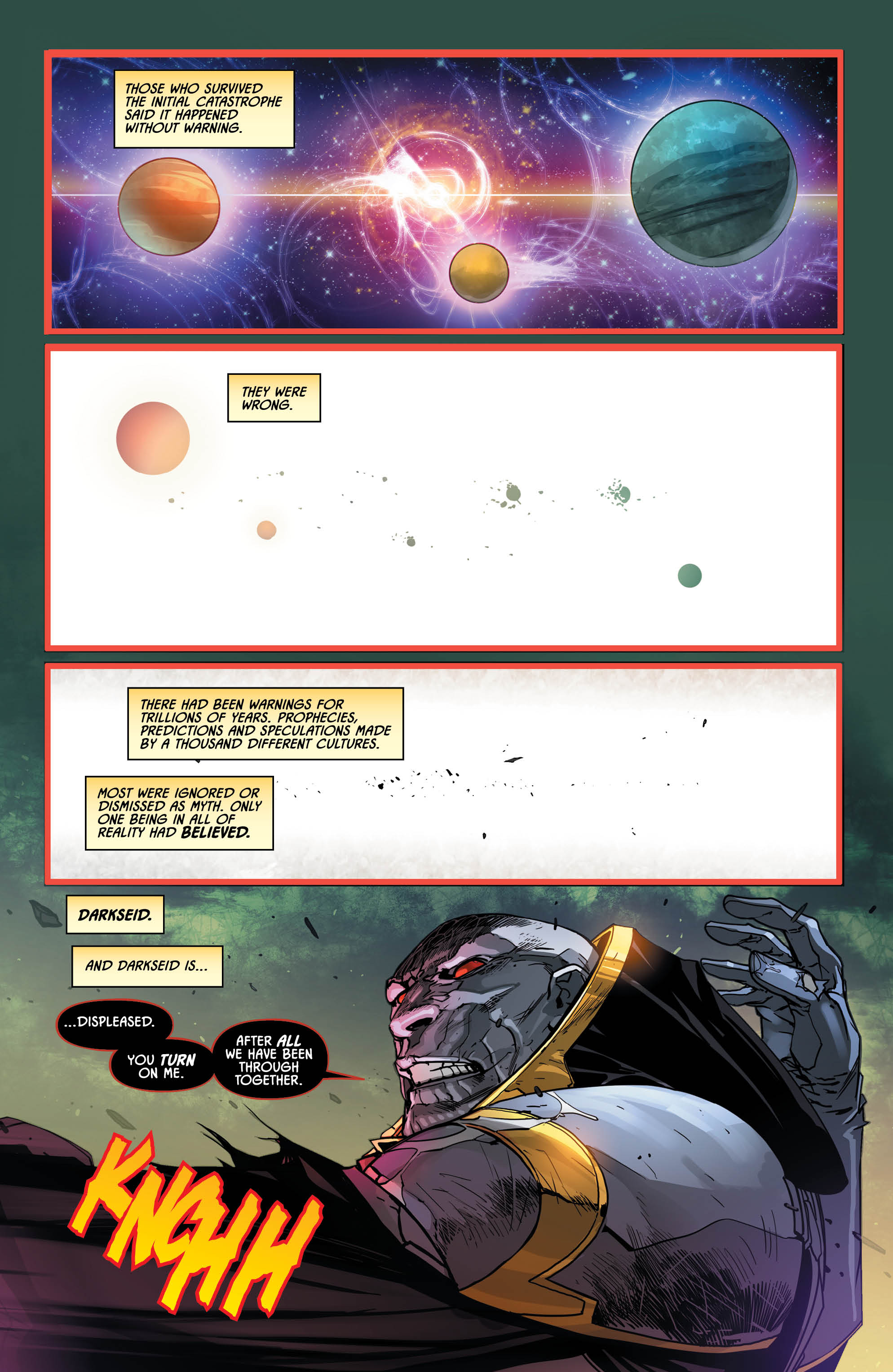 This issue essentially serves as a recap to explain how events have occurred according to Abnett’s new narrative, and there are some important focal shifts that he makes, the first of which is Darkseid. Before, Darkseid was the master manipulator who easily sent the team to convenient places, so he could fulfill his own agenda without much difficulty or incident. Abnett gave Darkseid a quality he’s always had but was missing in this series: foresight. One does not become ruler of Apokolips without some knowledge of the future. Now, it is revealed that Darkseid anticipated the initial catastrophe of the source wall, and foresees the recent rupture that occurred in Justice League as well. Darkseid’s knowledge of what will occur and his subsequent plans command respect.

As Darkseid carries out his mission, it is worth noting that Abbett’s narration captions are one of the best qualities about this issue. They draw the reader in so well because of their gravitas. Each caption speaks with a divine voice as it narrates what is happening. They are quite simple and add a lot of density to the book, but it feels righteous and draws the reader in more instead of pushing them away with wordiness. The lettering is very simplistic but still very effective. It’s professional and supports the cosmic technology that is being brought to the series, and Eskaton’s amorphous, dark matter-like word balloons are extremely effective in showcasing the anti-life nature of the character.

The rest of the art team steps up in big ways as well. Carmine Di Giandomenico and Ivan Plascencia do a great job portraying cosmic effects in this issue. From cosmic lighting to solar flares to waves of energy coming from the totality and the source wall, each effect felt distinctly cosmic. Blackfire’s new character design is also phenomenal. She commands authority as the new ruler of Tamaran, and her anger at Starfire for leaving her home is not misplaced. She is only doing what she thinks is best for her planet, and it is a fitting return for such a strong character. 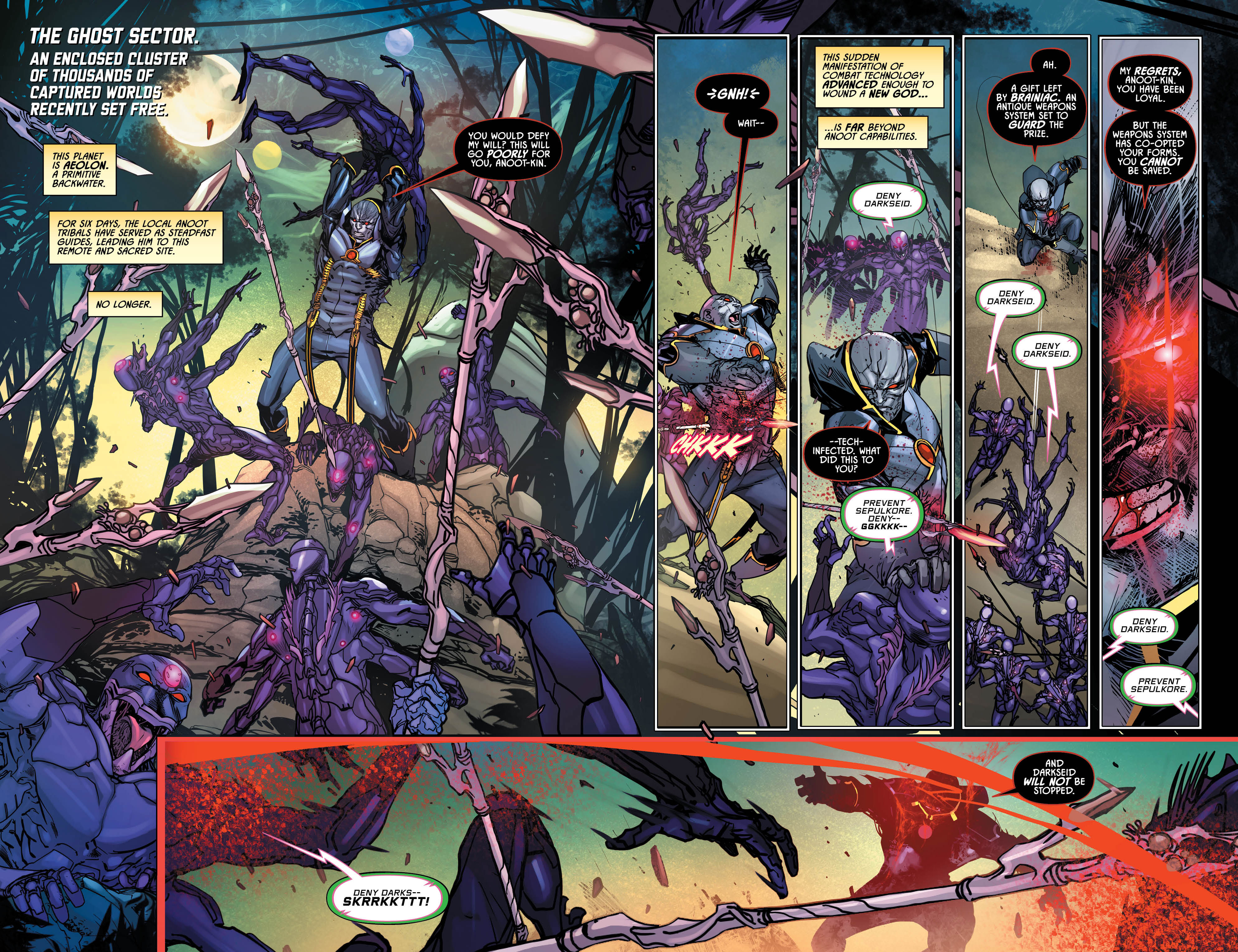 Finally, it is important to touch on a character that was dramatically improved in this issue of Justice League Odyssey: Jessica Cruz. During the first five issues, she only served to provide words of caution to the rest of the team. Anxiety is more complicated than just worrying about consequences all of the time, and Abnett saw that and gave importance to Jessica Cruz again. She is still primarily the voice of reason, but through one important scene with Cyborg, readers see the vulnerable side that makes her such a strong character. The suggestion that she is nothing without her ring, and the belief that Cyborg, Starfire, Azrael, and herself aren’t the “big guns” reveals some deeper insecurities that show she has a purpose and will gain something by being in this book, and Dan Abnett is only beginning to show readers that they will gain something by reading it.

Justice League Odyssey may have a fresh start, but it still needs some work. Cyborg, Starfire, and Azrael are still quite weak in this issue. All they have at this point is determination, and while Starfire’s is well-placed in her attempts to find and revive her home world, it’s not enough to sustain the character as an individual. There are a lot of aspects to like about this new issue, but unless purpose is given to the core characters, this book isn’t guaranteed to survive much longer.

Justice League Odyssey #6 is a fresh start that shows the potential of the great cosmic odyssey the series could be. The book isn’t quite there yet, but with Dan Abnett at the helm, we are well on our way.

Shazam Comes To The Rescue Of Captain Marvel