Who killed Helen James? How will Derek react to meeting his birth mother? Where will he go next? Get ready to walk away with answers and more questions as we step out with Sideways one last time.

Is there value gained from an unsolved mystery? What about from a project cut short? After reading the Sideways finale, there are only two certainties: Helen James’ killer has been brought to justice, and Sideways is in a very different place now from when it began. Sideways has experienced many twists and turns over the last 13 issues, and it’s unclear whether that was intentional from creators Dan DiDio and Kenneth Rocafort, or a consequence of how the DC Universe, reception to the comic, and the comic’s suddenly cancellation unfolded. 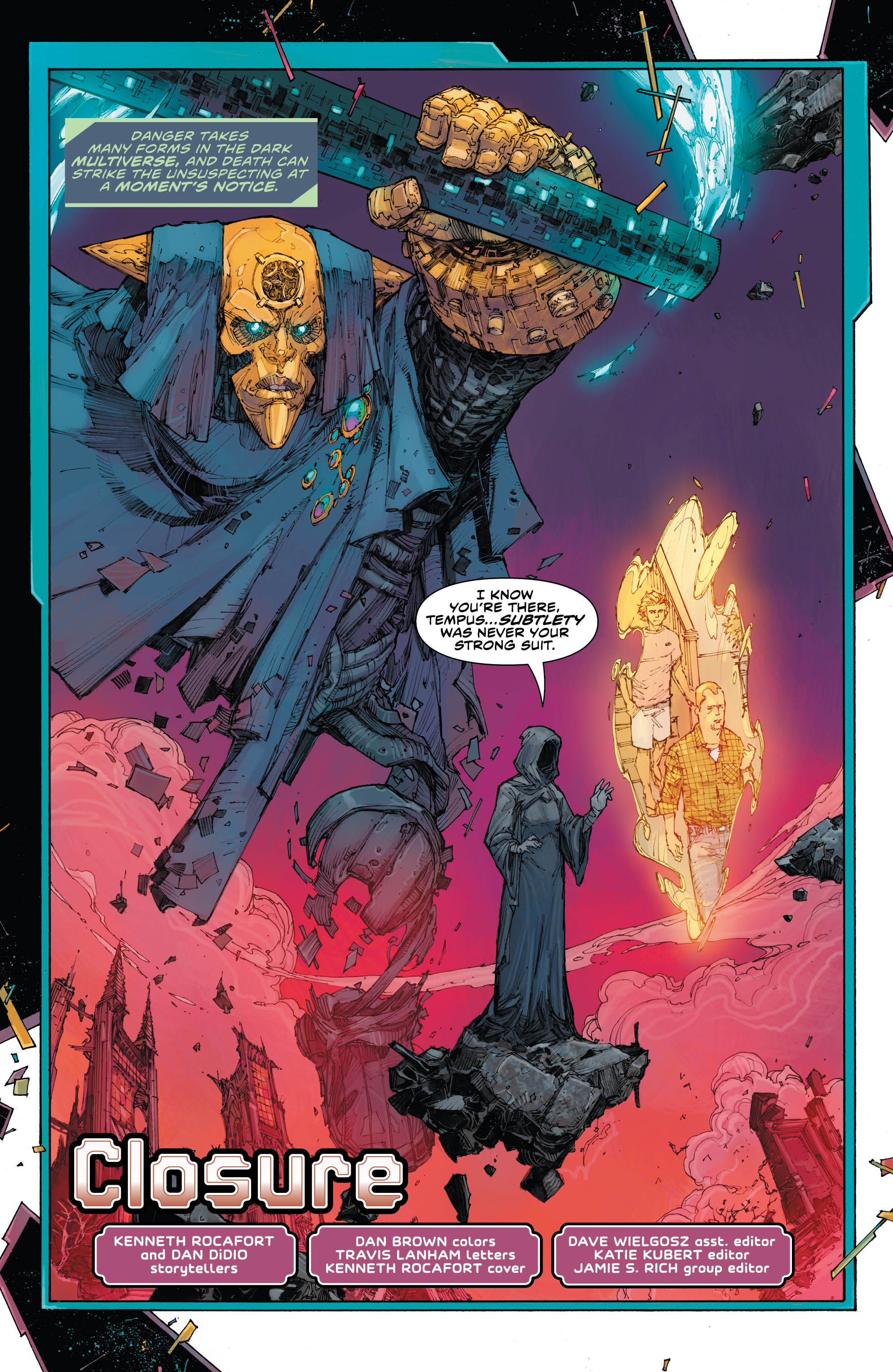 Readers are coming into the finale with a lot of questions. Who killed Helen James? Who is the cloaked figure looking after Derek? Why are the Fuginauts so interested in Derek? Why is Derek’s birth mother only comic into his life now? This issue only answers some of those questions as it begins with a conversation between a cloaked figure overseeing Derek from between dimensions and Tempus Fuginaut. Rocafort’s design for Tempus Fuginaut demands respect and authority. Time appears to stand still as his towering presence with glowing blue eyes and watch-like gears turning in his head appear on the page. Dan Brown’s warm red and purple colors of the place between dimensions brings the scene to life with a unique vibrancy that separates it from something like the Bleed. The answers many are looking for are strongly insinuated but never confirmed, meaning this likely isn’t the last time Sideways makes an appearance.

The issue picks up with Derek meeting his birth mom for the first time. The conversation plays out very well with both parties having some strong words to say. That being said, the issues authentically leans into the discomfort and silence present in this sort of conversation and respects both of the characters. The heavy Spanish dialogue used by Rocio is very nice touch and contrasts Derek’s adopted identity with his biological one. Derek is still growing into the person he wants to be, so both parts of his identity are important for growth.

The final scene and how this issue deals with Derek’s mother are the best parts of the issue. There are very few young heroes living in a nontraditional family setting, and seeing Derek work through those problems has been very rewarding for a lot of comic book readers, but seeing Helen work through her own share of problems has been even more so. She had struggle to feel love from Derek every step of the way, and no matter who the cloaked figure is, readers are certainly not done hearing how important she was to the young man Derek is today. The final issues convey these points through a figurine and some text messages, but it comes through as a thoughtful and touching ending thanks mostly to Travis Lanham’s lettering. 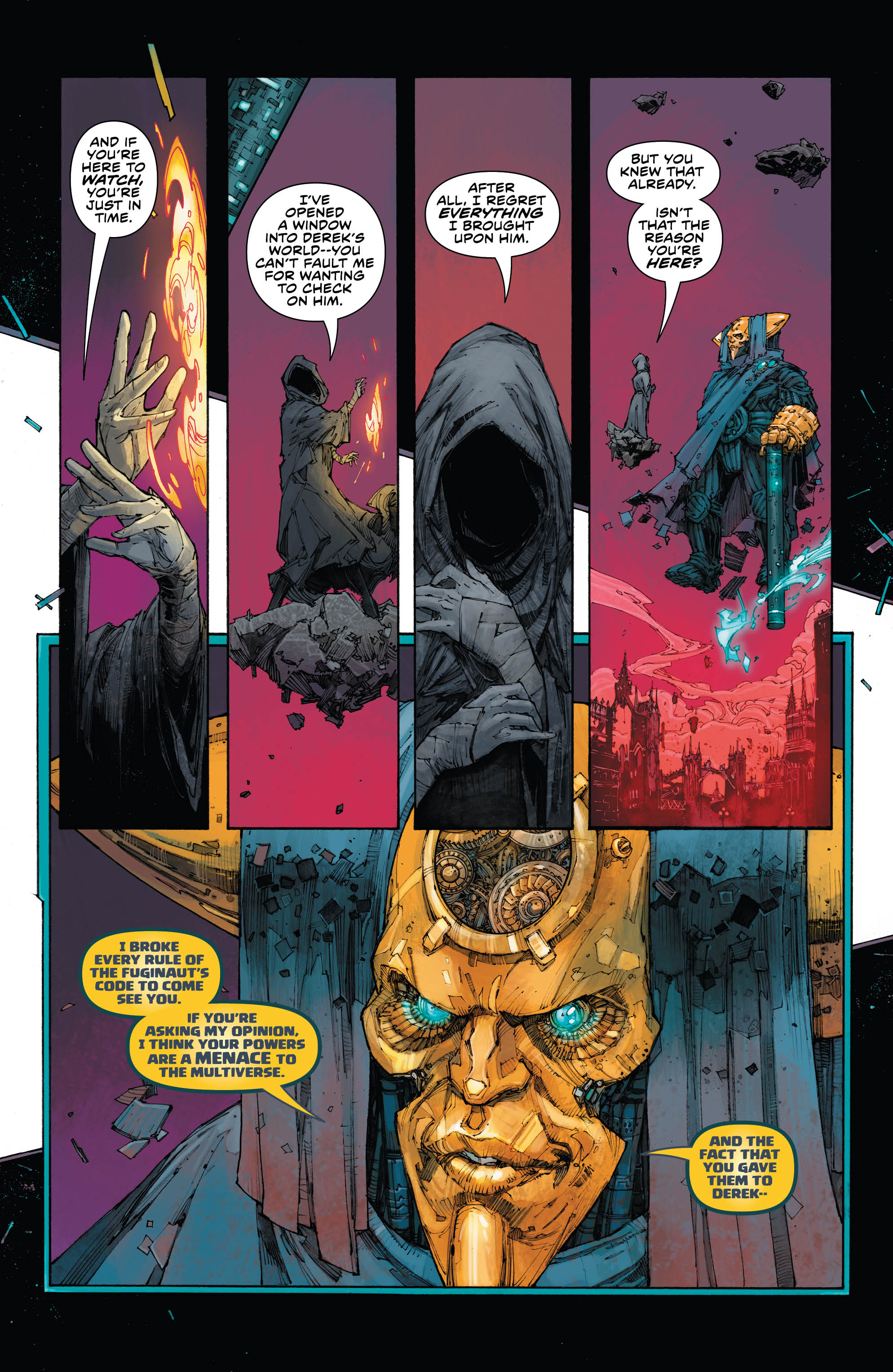 Looking back on what Sideways has given the DC Universe during its 13-issue run, it boils down to Derek James and the relationships most important to him. Sideways is one of the most respectful and significant Spider-Man pastiches created in comics. His youth, living situation, and mannerisms clearly come from such a foundation, but Derek is decidedly his own person in some very meaningful ways. Derek’s nontraditional family setting is very unique, and not a lot of comics explore being adopted in a very meaningful way, but Sideways has always kept it as a theme throughout the run. I think many readers will connect with Derek’s situation in ways they may not be able to connect with many other heroes. Additionally, his immaturity and “average” qualities are refreshing to see. Derek is not a gifted high school student in any regard before he’s given these powers, and he remains that way afterwards. Seeing everyone in comics excel at something even before they got powers can be frustrating.

Derek James is a special character, and those around him help accentuate that. His dad’s apathy towards Derek once Helen dies is extremely heartbreaking in ways readers don’t often get to see in comics. Scenes of violence and abuse or love and connection between parents and their children are frequently depicted, but the fact that Derek’s father doesn’t want to further his connection with his own son is uniquely heartbreaking. Luckily, Derek has Ernie to turn to for support. Platonic friendships between members of opposite genders are rarely pulled off in comics, and Ernie and Derek show immense support for each other in very difficult times. It’s a relationship filled with compassion but without a hint of romance, and that is something very special brought to readers by Sideways, as is Derek James himself. As for where the character will end up next, Young Justice, Teen Titans, and the Justice League are all teams thrown around by Ernie in the final issue. This is a character perfect for Brian Michael Bendis, and I hope that he is given the opportunity to run with him. Many think Sideways belongs in Young Justice, but I believe Bendis will establish a connection between Derek and Naomi. Their origins, powers, and pasts conveniently fit together and I’d like to see the two characters interact, even after limited exposure. Wherever Derek appears, its likely to be in the near future.

Unfortunately, while many characters in this series show enormous potential, the plot throughout this run has been rather lackluster. The villains at the beginning of the run were not very compelling, and the mystery of who killed Helen James turned out to be rather disappointing as they drew it out across six issues before ending the mystery with a rather mundane result. Even Derek’s extended trip into the Dark Multiverse was a bit disappointing and left few consequences after his journey with the Seven Soldiers. While Derek is a special character many will remember, the plot of this 13-issue run and its conclusion is something many are likely to forget.

Dan DiDio and Kenneth Rocafort show how special the life of Derek James can be as we step out with Sideways for a final time… for now!