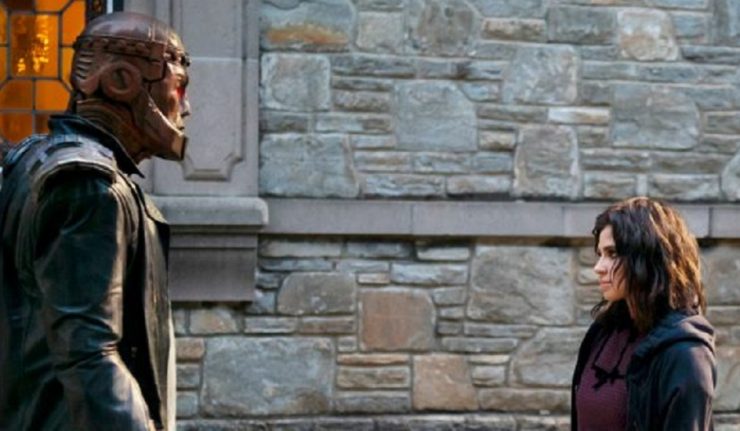 As the team recovers from the fight at Fuchtopia, Willoughby Kipling (guest star MARK SHEPPARD), a magician and an old friend of Niles Caulder’s, unexpectedly conscripts the Doom Patrol into helping him avert the end of the world by stopping a nihilistic cult. Unfortunately though, the Doom Patrol fails and the Apocalypse begins!

This was another great episode of one of my favorite DC shows, and we’re only four episodes in!

This week, the Doom Patrol take a (no so) little break from their search to find The Chief to try and stop the world from being undone, with the help of one of my favorite television character actors, Mark Sheppard.  Whether it’s Firefly, Battlestar Galactica, or, most notably, Supernatural, he always brings a gruff, yet sassy charm to every role he plays.  It’s this exact thing that makes his appearances so memorable, no matter how big or small.  And the fact that he’s playing a magic user, akin to DC’s very own John Constantine (cigarette smoking included), seems to fit right in his wheelhouse.

And speaking of Constantine, as I was watching this, I couldn’t help but think that he would’ve fit perfectly into this role.  Then I did some digging into the character of Willoughby Kipling and discovered that he was actually created as a substitute for John Constantine because DC editorial wouldn’t allow Constantine to be used in superhero books at the time, which explains their similarities.

The show took a bit of a dark, strange turn in this episode.  We’ve seen a woman turn into a giant flesh blob in the first episode, we’ve seen our main characters travel inter-dimensionally through a donkey in the second episode, and we even got a Nazi puppet show in the third episode, but this one is by far, without a doubt, the weirdest episode yet…and I love that!

I love how they’re not afraid to take chances, no matter how strange it may sound on paper.  Yet, they somehow manage to make these bonkers, off-the-wall scenarios work, while giving the audience deep, emotional, character-driven subplots.  It’s simply outstanding.

In this episode, the team continues to splinter apart from one another, and this provides the perfect opportunity for some great character development for the individual members of this motley crew.  Cliff is forced to realize that his actions have consequences for those around him; we get a deeper understanding of the inner workings of Jane; Rita has to learn to be more confident in who she is and what she brings to the table as a member of this team; we find out that The Chief knew more than he was letting on about Larry’s “inner self”; and Vic learns there’s more to being a leader than just telling people what to do.  There’s so much to unpack here, and I’m honestly shocked they were able to pull it off in such a perfect fashion.

The performances in this episode were stellar, as usual.  Other than Mark Sheppard, who I already spoke of, the highlights for me were Brendan Fraser, who is KILLING IT as Robotman, and Ted Sutherland, who played Elliot aka The Unwritten Book.  Fraser has been giving some of my favorite performances in this series.  Even though it’s just a voice over, he knows just how to pack the right amount of punch behind every single line of dialogue.  It’s incredible, especially when combined with the spot on physical acting of Riley Shanahan (the man inside the suit).  And then there’s Ted Sutherland.  He gave such a powerful and emotional performance as Elliot, I was blown away.  I could feel his intensity dripping off the screen.  The emotion was palpable and I’m hoping his career really takes off, because I definitely think he’s one to watch out for.

Another thing about this episode that I was thrilled with was that Rita finally displayed the powers that garner her superhero name, Elasti-Woman.  When her arm stretched out across the room, I let out a loud, audible “YES!”, as this was something I’ve been hoping to see.  It was even something I asked April Bowlby about when I interviewed her before the series began.  So I’m absolutely thrilled to see Rita displaying enough confidence in herself that her abilities can be used in new, exciting ways.

And I can talk about Rita’s awesome stretching scene without mentioning the great special effects in this episode.  Whether it was that, or a singing, blue horse head, or a sweet flaming sword, the effects here were stellar.  It’s shocking to me that they’re so good, as I’m used to seeing some lackluster special effects when it comes to television shows like this.  But Doom Patrol is definitely doing it right.

This is a very minor negative, but I felt like this was a pretty drastic shift for the first three episodes.  They’ve been so focused on finding The Chief, that to suddenly have to deal with something else so major seems weird, especially since it’ll continue into at least the next episode.

Overall, this was another fantastic episode of Doom Patrol.  They are definitely setting the bar high for their future shows like Swamp Thing, Stargirl, and the next season of Titans, but if the DC Universe continues to deliver unique, quality product like this, I will continue to support whatever they choose to do next.