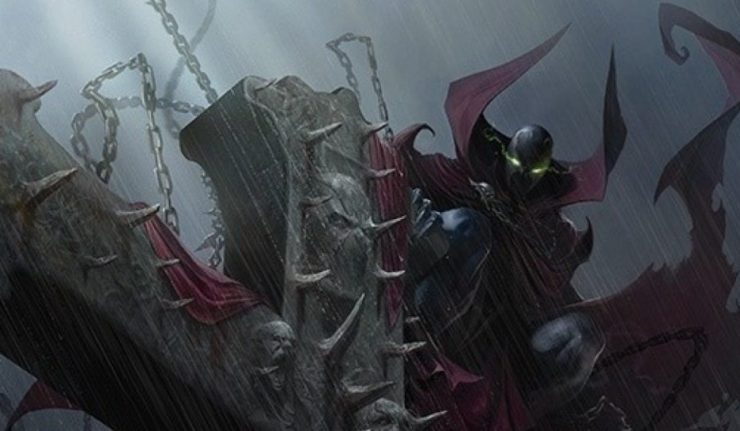 “You’re alone on this boys!  God isn’t here to save you and Spawn’s going to exploit that.” – Cogliostro

“THE LIFE AND DEATHS OF AL SIMMONS,” Part One The road to SPAWN’s record-setting 300th issue BEGINS HERE!!! Witness the secrets of Al Simmons’ past, present and future!!! Every hero! Every villain! Revisit Spawn’s legend in an epic, wide-screen story from critically acclaimed illustrator, JASON SHAWN ALEXANDER, and legendary creator, TODD McFARLANE!

This is the perfect beginning to your game of catchup.  Perhaps Spawn has not been your cup of tea ….even from the beginning.  Perhaps  you have been admiring the art, but not delving into the story.  But now perhaps with all of the celebration of the upcoming Issue #300, you need to get back into the game?  Who is the Anti-Spawn?  Who is the Redeemer?  Who is this Al Simmons and why is he so pissed off?  What kind of creature finds itself at odds with both Heaven and Hell?  Issue #296 begins your history of Spawn and is the perfect reference book as Cogliostro and the Redeemer sit down to review how Spawn became his own agent of destruction and how there needs to be a plan to both destroy him as well as preserve their own skins!

The king of independent comics, Todd McFarlane, provides a rich “dictionary” to introduce Spawn to new readers.  Reminiscent of the old Batman television series (When we last saw our heroes….), McFarlane and company weave a well-crafted reintroduction to Spawn.  McFarlane’s pencils are perfect and Jason Shawn Alexander provides the “cliffnotes” version of Spawn to catch up new readers in anticipation of issue #300.  This issue is a catalyst to start the march towards the landmark issue!  Make sure you review the issue by issue account of the introduction of characters along the way.  Looking for a lost issue to add to your collection….look no further as you will know exactly where to go!

If you are long time reader, you won’t get anything new, until the ending.  And that is where the dynamite is lit!  First appearance of Doomsday type of stuff in this Spawn ending.

Spawn #296 proves to be a jumping off point for a review of issues #1 to present, so for anyone interested in adding this story to your “most followed list”, you need to jump on now!  If you are a long time reader, you won’t want to miss this issue as it reaffirms why you got on the Spawn train immediately.  For those late adapters, this is where you play “ketchup and mustard” and find your place in the rich history of Spawn. 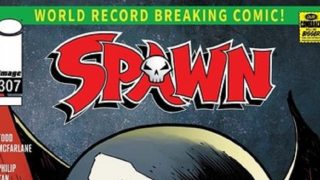