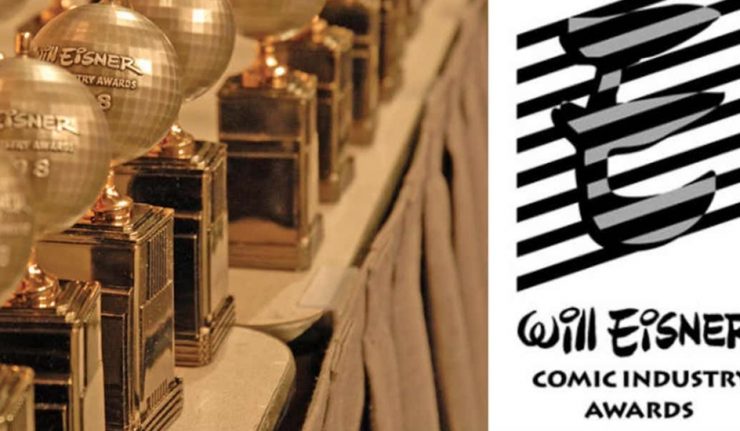 Some of the DC Eisner nominees include:

All professionals in the comic book industry are eligible to vote for the Eisner winners. The awards ceremony will be held Friday, July 19 at the Hilton San Diego Bayfront Hotel, as part of Comic-Con.

Best Short Story
“Get Naked in Barcelona,” by Steven T. Seagle and Emei Olivia Burrell, in Get Naked (Image)
“The Ghastlygun Tinies,” by Matt Cohen and Marc Palm, in MAD magazine #4 (DC)
“Here I Am,” by Shaun Tan, in I Feel Machine (SelfMadeHero)
“Life During Interesting Times,” by Mike Dawson (The Nib), https://thenib.com/greatest-generation-interesting-times
“Supply Chains,” by Peter and Maria Hoey, in Coin-Op #7 (Coin-Op Books)
“The Talk of the Saints,” by Tom King and Jason Fabok, in Swamp Thing Winter Special (DC)

Best Academic/Scholarly Work
Between Pen and Pixel: Comics, Materiality, and the Book of the Future, by Aaron Kashtan (Ohio State University Press)
Breaking the Frames: Populism and Prestige in Comics Studies, by Marc Singer (University of Texas Press)
The Goat-Getters: Jack Johnson, the Fight of the Century, and How a Bunch of Raucous Cartoonists Reinvented Comics, by Eddie Campbell (Library of American Comics/IDW/Ohio State University Press)
Incorrigibles and Innocents, by Lara Saguisag (Rutgers Univeristy Press)
Sweet Little C*nt: The Graphic Work of Julie Doucet, by Anne Elizabeth Moore (Uncivilized Books)