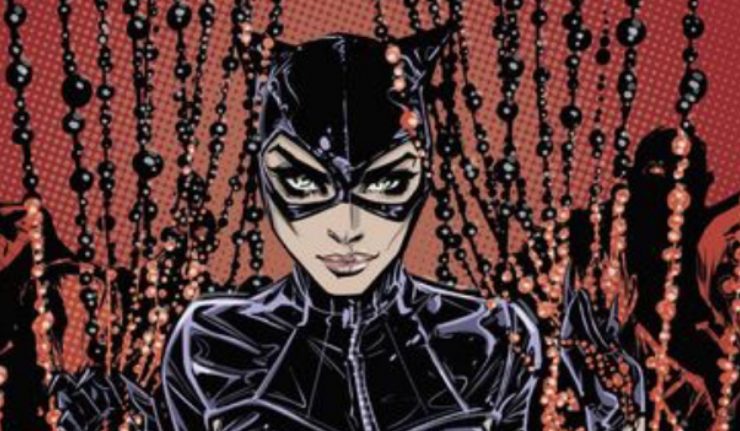 “What was the point in that?” – Carlos, Catwoman’s recent side kick and a correct observation on reading this issue of Catwoman.

Worlds collide in Catwoman #11 as Catwoman’s pursuit and eventual breakout of Carlos, her current sidekick. Mrs. Creel makes an appearance to put political pressure on her son, and to remind him of his destiny as a Creel.  Who is that mysterious person getting into the limo with Mrs. Creel?  And one of Mrs. Creel’s bodyguards pays a visit to someone outside the circle.  All this and a movie premiere, a car chase through the city, and the acrobatics and sauciness that is only Catwoman.

This issue doesn’t provide many.  In terms of dialogue, this is not a usual Catwoman tale (pun intended).  Stealth is great, but not in a comic.  Frame by frame, this issue is pretty silent.  Other than an elaborate rescue chase through the city ending with a wrecking of a movie premiere, and the Mrs. Creel “meeting in the limo”, it is rather stilted in its story telling.  Artists Blanco and Petrus have to carry the weight of this issue and while the art is solid, Jones’s story telling is missed in this one!

One is left scratching their head over a stranger getting into the limo with Mrs. Creel and one of Mrs. Creel’s henchman paying a visit to a pawn shop.  If this issue is a “seed planter”, it sure has come in as a whimper.

Let’s talk about the elephant in the room in this issue of Catwoman #11.  With the success of Captain Marvel at the box office, Jones’s story albeit appears to take a jab at the failure of Catwoman in the movies.  Sure, we love Michelle Pfeiffer in anything, and Halle Berry’s turn at the character as well as Anne Hathaway in arguably the best Batman three arc movie trilogy ever gave us some “uhh” moments.  But Jones puts Catwoman’s claws on for a direct swipe at Marvel and their recent box office success.  However, comics get to do that.  We get satire, we get drama, we get imagination.  I just didn’t think we would get so much passive aggressiveness out of a comic when the movies didn’t quite live up to the hype.

Time will tell on Catwoman.  After her recent departure from Batman’s life in a pretty dramatic way, we can only hope their paths will cross sooner than later.  Catwoman is having a tough time carrying her own title and perhaps its time for her to go away for a bit.  Too much of any good thing is too much!