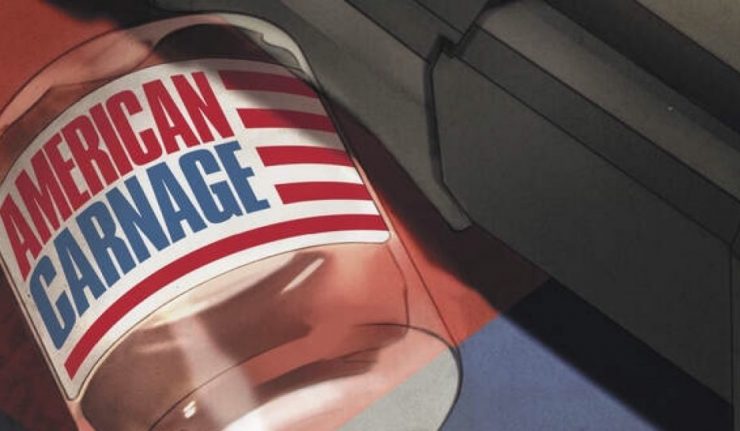 A new storyline begins! A tragic mistake in Richard’s past left an innocent child dead, and it’s a devastating trauma from which he’s never recovered. Determined not to let it happen again, he risks everything—including his undercover status—on a mission to rescue a drug-addicted young man in way over his head from the white nationalist narcotics trade.

Ben Oliver’s cover is great. I love the drug imagery and how the image implies how it can take over someone’s life. And it looks great.

Richard and Jennifer are a weird pair that is the most compelling aspect of the book. They’re both so damaged that I understand the infatuation. She knows he’s FBI but he doesn’t alert Sheila. He goes along with it because I think he just wants to be around Jennifer.

I don’t like the art. I have a hard time getting invested in the story because the less detailed style makes the characters all look weird to me. It distracts me rather than pull me in.

I do not understand Sheila. For the second time, she is offered help looking into Wynn Morgan. And this time it isn’t from a corrupt politician. It’s the FBI; they’re willing to investigate with her. For some reason, she’s hostile and rejects the offer just like last time. She doesn’t actually have a choice this time but I don’t have a clue why she doesn’t want help. I have no idea why this person does anything. She has been the biggest blank slate of the book. I have a decent understanding of Richard, Jennifer and Wynn. But Sheila feels under developed which is strange considering she is the driving force of the plot.

I did not enjoy this issue that much. Focusing on the twisted relationship between Richard and Jennifer helps because they’re a little interesting. But the art doesn’t appeal to me at all. And I have no investment in Sheila at all. The series feels padded out and dull.