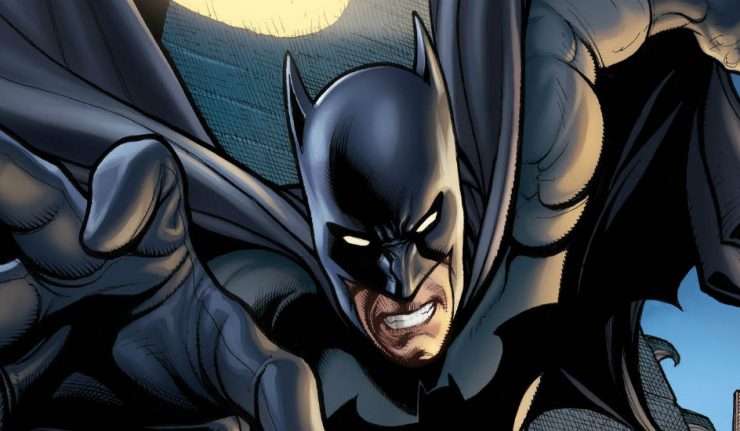 Batman #71, “The Fall and the Fallen” continues! Will it be father and son working together, or tearing each other apart? When it comes to the Waynes, expect a little of both. In the quest to get Bruce Wayne to hang up the cape and cowl, Thomas Wayne is going to have to use a little tough love. Only, not all the muscle behind it will be his own.

The build up for the encounter with Bane was pretty good in this issue, as immediately when our issue starts we see Batman on top of police headquarters lighting a red batsignal in the sky. Gordon immediately confronts Batman and tells him that he doesn’t belong there, and that their partnership is done. Batman has no interest in hearing anything, and immediately jumps off the rooftop. Across the city and the world, the rest of the bat family answer the call. With only Dick, Stephanie, Kate and Jason missing, the rest of the family immediately gathers on the rooftop with Batman to discuss the emergency. Batman tells them about Bane and his running of the inmates of Arkham. He tells them of his imprisonment and eventual escape from it, and says he intends to return to Arkham and shut it down.

My only complaint about this issue is the encounter with Bane that we have here. Although Batman finds Bane and Flashpoint Batman in Wayne Manor waiting for him, the encounter isn’t exactly what I thought it would be. I know King made an intense build up over these last few issues, but the fight was extremely brief. However what makes this interesting though is that it seems that this fight may not have happened at all. It seems that Batgirl talked to Alfred earlier, and mentioned how strange Batman has been acting in Wayne Manor. It seems that Batman may have imagined the entire encounter! Batman doesn’t take too kindly to the news that Batgirl gives him, and as Tim tries to console him–Batman punches Tim in the face! At this point Batman has pretty much alienated all of his allies, and he doesn’t know what’s real and what isn’t. Personally I thought this encounter with Bane was real myself, and King perhaps does too good of a job doing that here.

Batman #71 is a good read but really doesn’t add too much to the story that we don’t already know and that’s pretty disappointing. I’m eager to find out Flashpoint Batman’s motivations and I thought we’d at least get a hint with the encounter in Wayne Manor–but we got nothing. I really hope the next issue gives us more clarity on Flashpoint Batman, Bane and the overall direction of the run. I thought this issue would give me some answers. Instead I’m left with more questions.