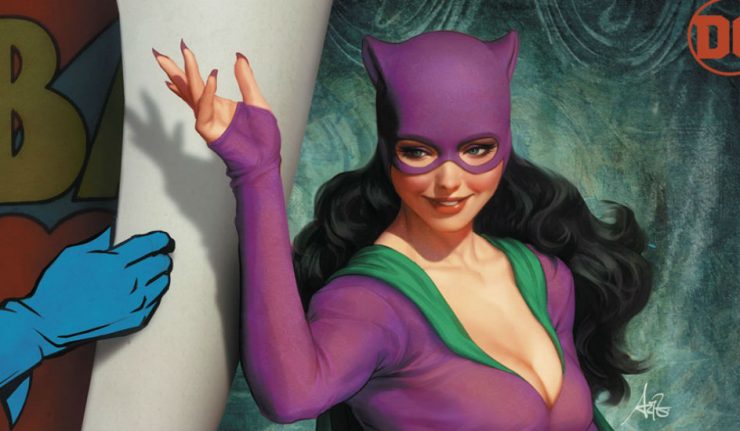 DC Comics News has compiled a list of DC Comics titles and collectibles shipping to comic shops for June 12, 2019.

Check back every Friday with the DC Comics News Pull Box to see all the cool new DC Comics titles and collectibles that will be available at your favorite local comic shop! So, what titles or collectibles will you be picking up this Wednesday?

You can sound off in the comments section below! Click on Comic shop Locator to find the comic shop nearest to you!

True happiness begins in the heart. Our memories and emotions can play tricks on us, though, and divert one’s reality into something completely different. The Batman Who Laughs has based his entire worldview on this very concept, and it is in this moment that he must finally confront the one man who stands in his way, the one man who could complete or halt his plan…the last Bruce Wayne. It is here, on the home turf of Wayne Manor, that Bruce relives the happiest moment of his life-the moment he became the Batman Who Laughs. Will Batman be able to outthink the Dark Multiverse version of himself and stop his most sinister end? Or will the original Dark Knight succumb fully and let go of his morality? While good almost always wins, this issue is the start of something more…setting up a larger plan based in the ultimate betrayal of infection, loyalty and true happiness. This is not the end…it’s only the beginning.

This issue, it’s a story from the pages of Hawkman’s journals! Travel back in time to when Carter Hall was reincarnated as a soldier in a cosmic army, while his people were at war! But what happens when a being known for constant reincarnation ends up coming back to life as his own enemy, fighting for the other side? Does it make him a more sympathetic warrior, or give him the weapons to better destroy his enemy?

“The Flash Year One” continues! Things are not looking pretty for the Flash, who just got his scarlet butt handed to him by the Turtle. If Barry Allen thought being a hero was going to be easy, he’d better think again after this beating–but will it be enough to detour his destiny?

Note: Variant Prices To Be Determined By Retailer