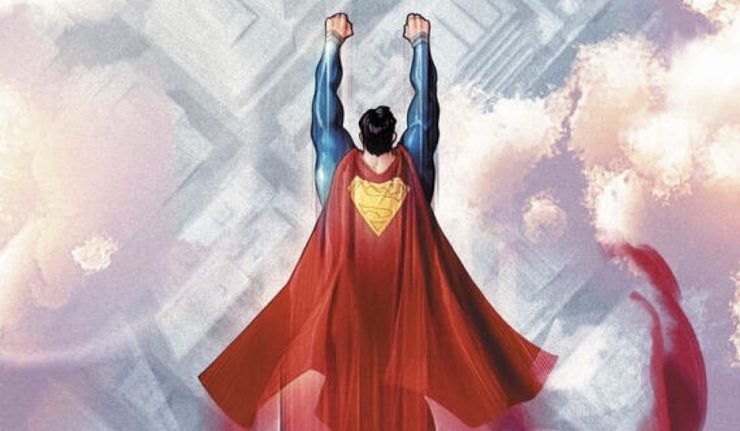 Bendis shuffles the pieces of his puzzle around and finally gives some of the ideas introduced in his unfinished introductory Action Comics arc motion.  Along the way, Rose & Thorn make their first appearance in a while.  Robinson Goode gets a call from Rose and she has a lot to tell….

Some of the story ideas that Bendis introduced in his first 6 issues of Action Comics finally make an appearance again.  Remember the kiss in #1004 between Lois and Superman on a street in downtown Chicago?  Well, Trish and Robinson have shown it to Perry.  This seems to tie in thematically with Lois’s book she’s writing, as well as having filled her dad in on the identity of Jon’s father.  The Red Cloud’s confrontation with Superman is now known inside the Invisible Mafia.  Bendis has also lined up his continuity as Superman’s actions here, the last arc and over in Superman get a timeline in a clever in-story manner.  This issue brings a cohesiveness to the title which as seemed very disjointed at times over the past year.

The best part of the issue is meeting Rose and Thorn and their presentation, especially Rose’s explanation of how they exist together as she tries to get Goode to understand her “uniquely unique situation.”  Rose is instantly interesting and sympathetic.  It’s some really nice character work, the best Bendis has done in his Superman stories so far.

Event Leviathan  makes an impact in Action Comics #1012 as it is now driving the story.  And as an event it doesn’t leave much room for character.  Outside of Rose, the only character work in the issue is a very awkward moment between Lois and Clark.  Apparently, it’s important to Bendis for the reader to know how often they have sex, and in a post-coital conversation they seem to be jibing at one another.  It’s hard to tell the tone of the moment, it’s not clear and what could seem like purposely humorous comments appear to have a real venom behind them.  It just isn’t clear what’s really going on.  Either way, a secretive conniving Lois Lane is just as bad as a poorly written moment between the Super-couple.

The reappearance of the Invisible Mafia in this issue is a reminder of the problems from their initial arc.  The Mafia itself, and the concept behind it are solid and engaging, the subplots going around on the side which are all revisited here don’t lend themselves well to Superman, Lois and their relationship.  Bendis seems to want to take Lois and Clark’s marriage through a painful path.  While they may come out stronger, it’s not enjoyable, it’s distracting and very un-Superman-like.  Finally getting all these sub-plots together again does make the issue feel like more set up.

The art isn’t altogether bed, but it’s uneven throughout.  While Kudranski does a nice job on the Rose/Thorn sequence, he seems to struggle with the Lois and Clark moments.  They both tend to look a little strange, except for the closeup of Superman in which he resembles Brandon Routh from Superman Returns.

I guess it’s important to state that this issue does bring together all the subplots from the last year and finally make it feel like one big story.  It’s taken a long time to get here….  Unfortunately, not all of it really works.  The Invisible Mafia still have a lot of potential, and Rose could be a breakout character, but Lois and Clark are really suffering.  Not only are they mostly on the sidelines, their story is tabloid gossip as opposed to something meaningful.