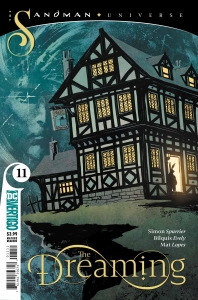 The Dreaming #11: The World’s End pub is a place where ales and tales flow freely. A place where the netherfolk gather to spin stories and mark time between realities. But a blight has come to the Worlds’ End pub, and as the search for Dream of the Endless nears its end, our plucky hunters must confront the saddest thing of all: a fable that can’t stop fading. Meanwhile, the new Lord of the Dreaming, chafing against its unwanted throne, gropes for answers—and endings…

Continuing their quest to find Dream, Dora and Matthew arrive at the World’s End pub. This is another nod to Gaiman’s Sandman series. The pub was the setting of a story arc by the same name. Customers of the pub take turns telling stories, and this serves as a bookend story to tell a number of self-contained stories.

The World’s End story arc served as a prelude to the following story The Kindly Ones, in which Morpheus met his death. Could a return to this pub be foreshadowing that a similar end is coming for his successor?

For some reason, a trio of beings have set the pub on fire and have come up with an interesting device to prevent anyone from putting the fire out. The trio are telling three connected stories which are holding the pub’s guest enthralled. The way in which the three tales are tied together is ingenious. Each story leads to the protagonist listening to or reading a story within a story. The story in the third story is the original story, so the stories proceed in an eternal loop of story within a story within a story.

The stories are also an interesting mix of genres. One seems to be a creation myth, the second an adventure of a pulp magazine style crime fighter, and the third is a science fiction tale. Three genres that don’t mix together well, but each leads into the next.

The way that Dora stops the telling of the stories is brilliant as well: she literally puts an end to them. She interrupts each of the stories in turn to add a ending to each that concludes it instead of leading into the next story.

We also find out that Dream had come to the pub earlier to get a fertility spirit to bless what looks like an egg. He also spoke about beginnings and endings. Could this be hinting that Dream’s time is coming to an end an a new Lord of Dreams will arise to take his place?

It seems that the threads are coming together as the story approaches its conclusion. The “next issue” teaser indicates that the “truth of Dream’s departure” will be revealed, and that the “new Lord of the Dreaming” will claim his throne.

Daniel Hall has been Dream for two and a half decades. While that may seem like a long time to readers, it’s incredibly brief considering that Morpheus was Lord of the Dreaming for eons. I would have preferred to see more of Daniel as dream before he meets his end – presuming that this is indeed what is about to happen.

Of the Sandman Universe titles, The Dreaming is my favourite, as it brings back a lot of the elements I enjoyed from Gaiman’s Sandman series, but also manage to move the story forward. The Dreaming serves as a worthy successor to Gaiman’s masterpiece.