You might have noticed there were no copies of Shazam! #7 on sale this past week, despite the book being rescheduled for an August 7 release (bumped from its original June date). In fact, don’t look for it before September 11 — a full 13 weeks after it was supposed to be on shelves. 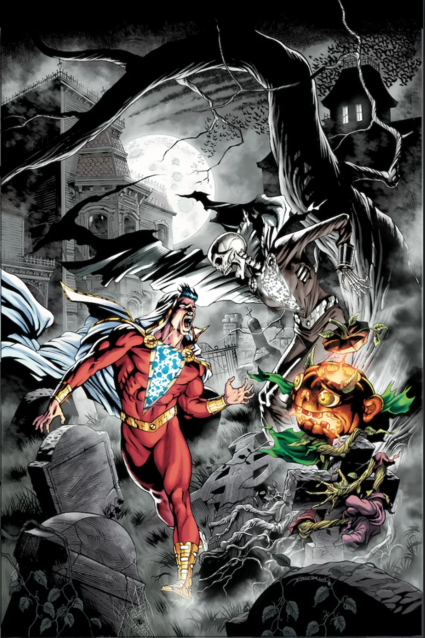 This certainly isn’t a new development for either of DC’s Geoff Johns-penned titles. There’s also news that another Johns-driven project, DC Universe’s Stargirl show, has been pushed back from 2019 to 2020.

Get your bets in now on whether the next issue of Doomsday or Shazam! will hit shelves first. Once again, here are the solicitations for #7 and #8:

SHAZAM! #7
written by GEOFF JOHNS
art and cover by DALE EAGLESHAM
variant cover by IVAN REIS
and OCLAIR ALBERT
“Shazam and the Seven Magiclands” continues as the shocking new member
of the Shazam family is revealed! This mystery person will send shock waves through the entire cast!
ON SALE 06.19.19
$3.99 US | 32 PAGES
FC | RATED T

SHAZAM! #8
written by GEOFF JOHNS
art by DALE EAGLESHAM
backup story art by MARCO SANTUCCI
cover by DALE EAGLESHAM
variant cover by MICHAEL CHO
As Billy Batson and the rest of the Shazam Family are about to learn as they cross over into the Darklands, the Magiclands aren’t all fun and games! In a world filled with all kinds of frightful creatures and haunts, nothing will compare to the horrors of Billy’s own internalized fears.
ON SALE 07.31.19
$3.99 US | 32 PAGES
FC | RATED T

Dan DiDio Worries About ‘Nostalgia’ In The Comics Market

“Stargirl” To End With Third Season, Cast and...