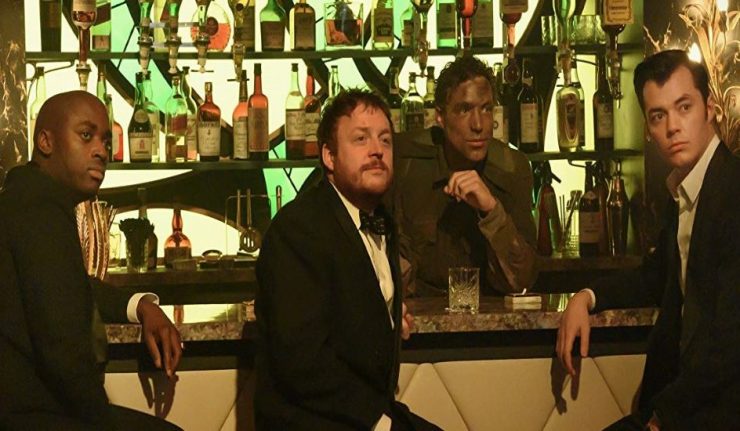 Pennyworth episode five focuses on the fallout from the shocking end to episode four. Alfred is distraught and he is haunted by the ghosts of his past (literally). Bazza and Dave Boy try to keep the club together, but without Alfred, it falls apart as does Dave Boy’s short lived sobriety. Mr. and Mrs. Pennyworth are doing their best to keep Alfred from totally losing all hope. Bet Sykes is even in mourning. Martha and Thomas plow forward, but the No Name League is really getting it’s teeth kicked in by the Raven Society. It seems that all of London is reacting to Alfred’s pain. Only when all around creepy guy, John Ripper shows up to cash in on Alfred’s promise, does he come out of his room and funk.

Bet Sykes is back! Well, not totally in her old form, but she is so interesting. Is she good, bad or crazy? All of the above maybe? Who cares. Besides Alfred, Bet is the best character on the show so more of her is always a positive. She stumbled upon Lord Harwood, who has seen better days. She and Peg take him in and that goes about as strangely as one my assume it would.

Writer Bruno Heller clearly wants everyone to understand how important Alfred is to this version of the DC Universe. Without him, all the characters in Pennyworth fall apart. He does not beat us over the head with it, but we see it and that is smart. It is good to have a strong hero who will eventually mentor Batman who oversees a large extended family who struggle alone. He does let us see Alfred out of sorts, and that too is important to the overall mythology of Alfred Pennyworth. He always seems so together. Regardless of when we see him in the continuity, he is on the ball. Showing him with some weaknesses is smart. Even James Bond (who is clearly the inspiration for this version of Alfred) suffered in On Her Majesty’s Secret Service.

Because this week’s Pennyworth did not only focus on Alfred, but on his absence, the show took a step back. Without Jack Bannon on the screen, this becomes a bit of a slog. Only Paloma Faith commands the screen in the same way and so when she is there, the show is watchable.

This episode was necessary for the overarching plot of the No Name League VS. The Raven Society, but the show is called Pennyworth. We need him. Had episode six been available on Epix, I would have pushed right through because by the end, things were heating up again. All shows hit a wall. Do they all push through it? No. Will Pennyworth? I suspect it will.