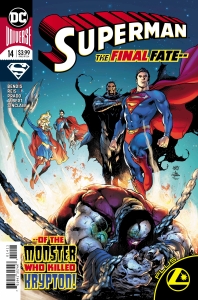 Superman #14: Lex Luthor is back in Metropolis—and he’s ready to wreak havoc! First stop, the most dangerous woman in the DC Universe: Lois Lane! Alone, her family a galaxy away, will Lois be tempted by Apex Lex’s offer? What does Lex have that this reporter can’t turn away from? Don’t miss this shocking new twist in the Superman mythos!

Superman #14 has been causing a bit of a stir amongst comics fans in the past few weeks. It and Supergirl #33 were supposed to be released two weeks ago, but DC requested for retailers to destroy the copies they received, which would be replaced by corrected copies.

Ostensibly, the reason for this was that the original covers featured branding that linked the issues to the Year of the Villain event, but that the story itself didn’t actually tie into the event. However, there was speculation that the real reason was that there was a last minute decision to change Lightning Lad’s ethnicity.

Now that the official version of this issue has dropped, we can officially end the speculation. So which is the real reason? It is true that the story has no evident connection to the Year of the Villain story.

But why did they also replace the copies with the variant cover, which contained no Year of the Villain branding, unless they changed something in the interior pages?

Well, side-by-side comparison shows that the colouring is altered slightly. However, it seems to have been an innocent enough mistake that was corrected. The first version gave Garth a skin tone that seemed somewhat ambiguous, but the corrected version makes it clear that Garth is indeed black.

I won’t get into arguments about whether DC was right or wrong to make this change to the character. I have mixed feelings when such changes are made to characters and sometimes it works, but often it doesn’t. Ultimately, the onus on Bendis to make his changes work. Any changes that don’t work will almost certainly be changed again the next time the Legion sees a reboot. 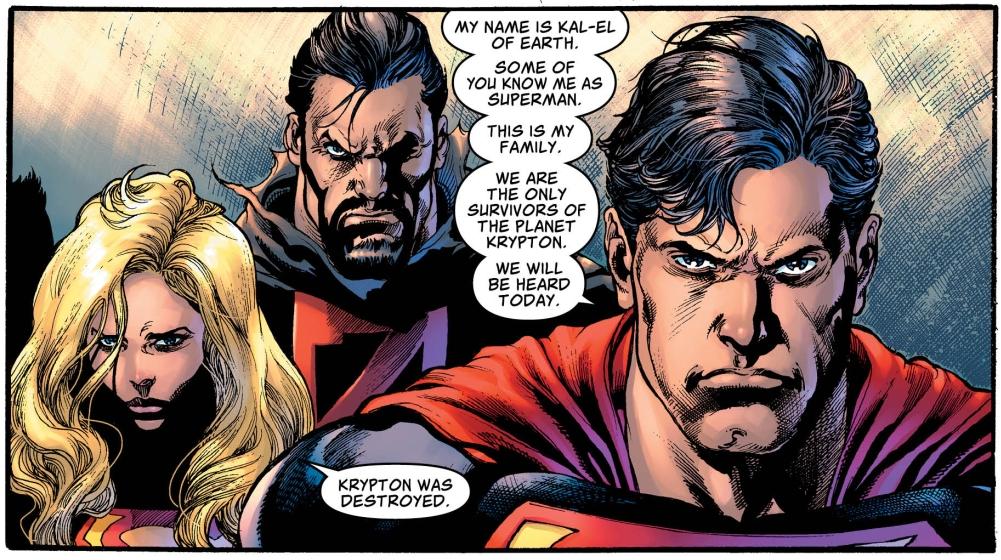 One thing I like is the uneasy alliance that has formed between Superman and Zod. This story has brought them together through the bond of being Krypton’s last survivors. Zod is now no longer merely seeking revenge upon Superman for being Jor-El’s son, but cares about the future of his own family and the other remaining Kryptonians. Bendis has given Zod a depth that previous writers haven’t.

I also noticed some interesting figures amongst the dignitaries that Superman and Superboy are addressing. The mother of Linya Wazzo (Phantom Girl from the Terrifics) was present to represent Bgztl. And apparently, even Atrocitus was there for Ysmault. And I did appreciate seeing Garryn Bek and Strata from L.E.G.I.O.N., even if only as a cameo. Hey DC, how about a new L.E.G.I.O.N. title?

As for the Legion of Super-Heroes, they made a stunning entrance, and I am delighted to see them return to the DCU. I have some trepidation about the changes Bendis has made to the team, but I am willing to give Bendis the chance to win me over with his interpretation of the Legion.

I have mixed feelings about the story in this issue. On the plus side, I actually like the resolution that Bendis has concocted for his Unity Saga, using the conspiracy that led to Krypton’s destruction to spark the formation of the United Planets. It really was a brilliant way to tie up the story.

Despite this well executed resolution to the story, I really dislike a lot of the changes Bendis introduced to the Superman mythos to bring us to this point: Jor-El surviving Krypton, the artificial aging of Jon, making an unknown new character the destroyer of Krypton, etc. I like the ending of Bendis’ story, but I don’t like the beginning very much.

It also seems to me to be somewhat irresponsible for the Legion to appear in that way at that exact time. The dignitaries present are in the middle of making their decision whether or not to form the United Planets when a large group of beings who claim to be from the future arrive to witness the start of the United Planets. You would think that they would want to avoid accidentally changing such a pivotal historic moment.

Unless… could it be that someone deliberately planned their appearance to effect a change in their past. Is it possible someone with a 12th level intelligence wanted to alter history to make sure that the United Planets was formed at that point?

And what ramifications might they face if they just changed their own history? And will the Time Trapper ignore them messing about with the past?

Honestly, this story has been a bit of a slog to read, and I have strong reservations about many of Bendis’ changes to the mythos, but Bendis ended this turbulent flight with a smooth landing. Hopefully, is signalling an improvement that will continue as Bendis moves into the next storyline.