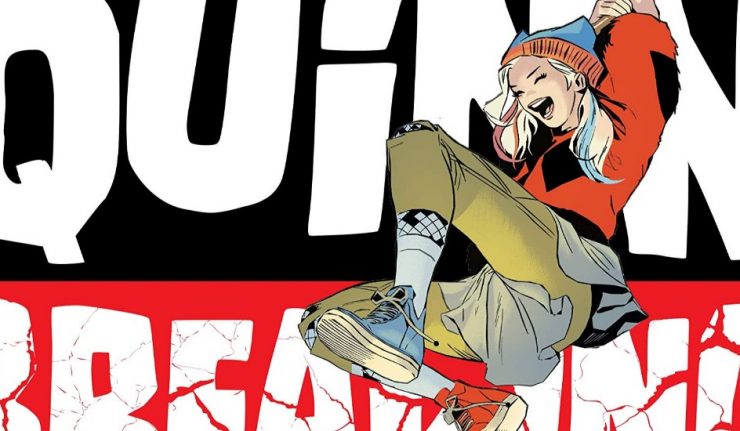 Breaking Glass is a YA re-imagining of a young Harleen’s first trip to Gotham City. Her mother is working hard to make ends meet so she she sends Harleen, who has a history of mental instability and violence to the most violent city in the DC universe to live with her grandmother. It turns out that Granny Quinzel has past and that a drag queen called Mama lives in her apartment. Because he is pretty amazing, he takes her in.

Harleen heads to school where she meets a young Ivy, an activist who is trying to fight the gentrification of the neighbor hood by the Kane family. Ivy and her family are going about it everything the right way, Harleen meets up with a person calling himself The Joker who is going about things the wrong way.

Harley Quinn is born. Mayhem ensues and glass is broken.

I would be hard pressed to say there is something that Steve Pugh did that was bad. I can not imagine a day wehre anyone would write that. This is not that day either. Breaking Glass hands him one of DC’s most popular characters and lets him reinvent her in a way that is beautiful and perfect while paying homage to the character that Paul Dini invented. Like always, Pugh sticks the landing. Look:

I don’t think anyone but Mariko Tamaki could have written Breaking Glass. I am a huge fan of her work both in the Super Hero world and out of it. Because Harley is an anti-hero, having a writer who captures that outsider status is a genius move. If you didn’t already have a soft spot in your heart for Harley before this, you will now. It is a daunting task she has taken on. Her DC Ink colleagues have not had to take on such a monumental task. People know and love Harley so to give her a new origin must have been hard. She rises to the challenge by giving her a family of drag queens who love her for who she is. This is delightful. Her take on Ivy is lovely as well.

The big reveal was not much of a shocker. I know it was supposed to be. It was pretty obvious from the jump who was behind the mask. I was hoping to be surprised and I just wasn’t. Since that was the crux of much of the plot, it just fizzled.

As I mentioned in the positive section,  Breaking Glass is a retelling of Harley Quinn’s story. People already love or hate Harley and comic fans can be fickle. If you want what you think you want, this is not for you. If you can come in with an open mind and are willing to let art be art, you will love this.