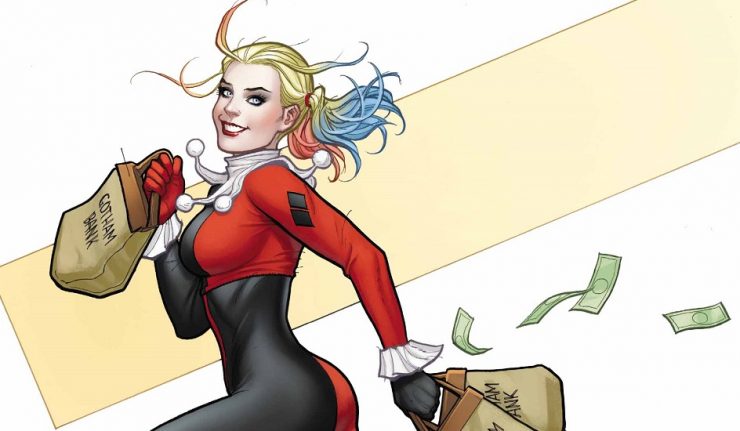 Harley Quinn #65 sees Harley dealing with the death of her mother. After a battle with cancer, we finally lose Harley’s mother, and Humphries wastes no time on it. Jumping us straight into the post funeral as Harley is trying to cope with the loss.

We also get the conclusion of the Trials of Harley Quinn as she aims to become the Angel of Retribution.

The way that Humprhies handles the death of Harley’s mother is genius. Something that could have taken an entire comic, was expressed in a few panels. We got to see all of Harley’s grief and emotions conveyed in but a few short panels that are brilliantly drawn and written. Everything about this issue is fantastic.

From the way that Humphries writes out Harley’s grief, to the way that her personality shifts when Mirand’r shows up. What I love most about Harley, and it is shown most in this issue, is her ability to pull herself out of an emotional hell. While some kind words from her friends help, in this issue, it being Mirand’r. It is ultimately Harley who talks herself out, and that takes a real strong mentality.

I also love Harley’s outfit while she’s on the island. Her bikini shell top has the classic Harley Quinn diamond and star! A great detail from the artist, Sami Basri that was spotted by this eagle eyed reader.

While I absolutely love the way that Humphries dealt with the death of Harley’s mother, I would have liked to have seen at least who showed up for Harley. How’s the rest of her family doing? How are her friends? How does it effect the proposition Apex Lex gave her at the end of last issue?

It could have been touched on briefly. But other than that, yet another issue that I have no negative things to say about. I find myself doing that a lot recently.

Harley Quinn is one of my favourite comics to read now. Whenever I see it come out I can’t wait to get into it. I always know I’m going to be in for a treat, and this issue was no different.

While the comedy, and crazy, took a little bit of a backseat for a more touching and heartfelt issue. Harley Quinn #65 still has the character’s main traits shine through. A fantastic issue, that honestly, caught me a little off guard after the last one, so props to Humphries for that.

Looking at Harley Quinn on the surface, the comic seems like a crazy comedic wild ride. But once you get past that and dig deeper, it’s a beautifully emotional comic.