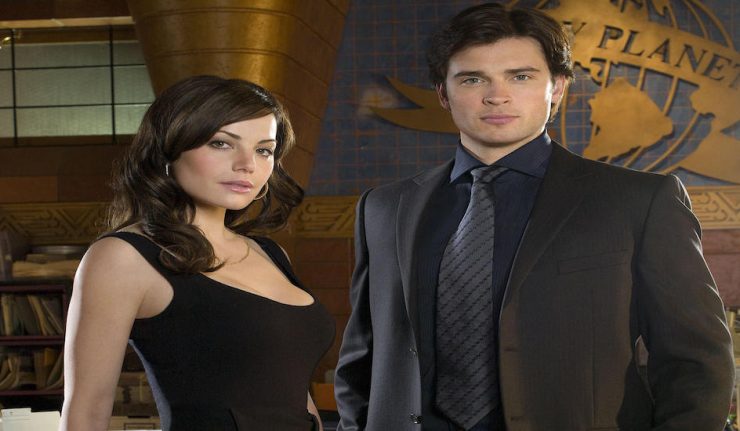 …it looks as if Tom Welling’s Clark Kent isn’t the only character leaving Smallville for the Crisis on Infinite Earth crossover event.

It was reported yesterday by DC Comics News that Tom Welling would be reprising his role as Clark Kent/Superman in the upcoming Arrowverse crossover event on The CW and now Erica Durance will join him as she will reprise her role as Lois Lane.

The crossover event will finally reveal where Clark Kent (Welling) and Lois Lane (Durance) have been and what their lives have been like in the 10 years that Smallville has been off the air.

While the Crisis on Infinite Earths crossover event will showcase multiple incarnations of the Man of Steel played by not only Tom Welling but Tyler Hoechlin and Brandon Routh respectively, there is no current plans for multiple versions of Lois Lane.  Before Durance the character of Lane was portrayed by actress Teri Hatcher on ABC’s Lois and Clark: The New Adventures of Superman.

Durance is no stranger to the Arrowverse as she plays Alura Zor-El, a reoccurring character on Supergirl.

Arrow executive producer Marc Guggenheim said in a recent interview that including Welling and Durance is indeed a move to pay homage to Smallville.

“For eight years, Arrow has stood on the shoulders of Smallville. Simply put, there would be no Arrow, and no Arrowverse, without it.”

Since Smallville, Durance headlined the Canadian medial drama Saving Hope which aired for five seasons and had a brief stint on NBC in the U.S.A

Arrowverse Crisis on Infinite Earths will unite Arrow, The Flash, Supergirl, DCs Legends of Tomorrow and Batwoman in a five-episode event that will air starting in December on The CW.

Stay glued to DC Comics News for more surrounding the Crisis even as it unfolds.