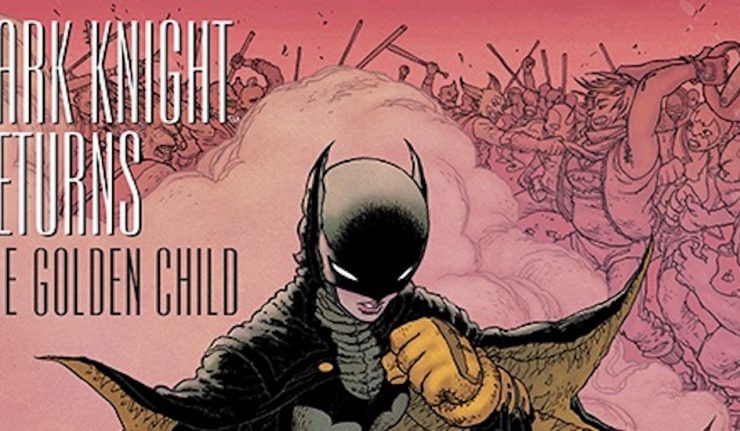 “The Master Race” was only the set-up to the next chapter of the best-selling comic book icon’s signature work as Dark Knight Returns: The Golden Child takes the story to a new level.

Acclaimed graphic novelist and visionary artist, Frank Miller is returning to the world of the Dark Knight elaborating on the hard-edge future-tense of the Batman legacy with Dark Knight Returns: The Golden Child hitting store shelves on December 11. The sequel to the best-selling Dark Knight III: Master Race will be published as a one-shot 48-page prestige format book crafted by Miller with art by Rafael Grampá. Miller handpicked Grampá to illustrate this latest installment, citing he was the “obvious choice” for help tell the tale.

Three years after the events of The Master Race where the trinity of heroes (Batman, Superman and Wonder Woman) including Carrie Kelly and Lara Kent brought down the Kandorian high priest Quar and his plot to persuade the world to worship him and his fanatics as gods, the next generation of heroes pick up the reigns to protect Gotham from a returning threat! Carrie Kelly becomes the new Batwoman, siding up to Lara to keep tabs on the “Golden Child” — Jonathan Kent — the son of Wonder Woman and Superman.

“I think that Jonathan Kent, in particular, will surprise everybody with his unforeseen abilities and impossible mind,” Miller revealed. “The Dark Knight Returns story began with its heroes getting older,” he added. “Now we’re seeing the next generation of heroes in action.” With the sprawling success of the previous books in the graphic novel run, surely fans will undoubtedly be thrilled that Frank Miller is returning to this world, and bringing Rafael Grampá along for the ride.

Dark Knight Returns: The Golden Child will be hitting shelves in December and will be released as a one-shot prestige format book on the DC Black Label imprint will retail for $5.99. There will be multiple variant-covers available and featuring some of DC Comics greatest and most profound talent.