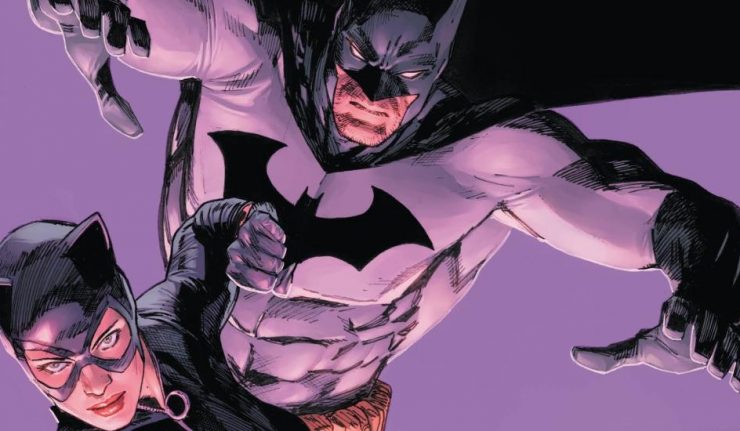 Batman #79: In the concluding chapter of the two-part “City of Bane” interlude, Batman and Catwoman pull a job to stop Bane’s supply ship from smuggling dangerous cargo into Gotham City. It’ll send a message back to the big guy that his reign of terror is soon to be over”¦but what does it also signal for the future of Bruce and Selina?

Last issue began with a panel from Batman and Catwoman’s first meeting in Batman #1 from 1940. This meeting occurred on a boat.

This issue begins with an image from Frank Miller and David Mazzucchelli’s Batman: Year One from issue #404 in 1987. This meeting occurred on a Gotham inner city street.

During King’s Batman run, Bruce and Selina have been having a repeated mild argument over whether their first meeting was on ‘the boat’ or ‘the street’. There has been some speculation over what this argument means, and in Batman #78, Tom King lets us in on the secret.

However, the explanation is somewhat less mundane than shifting continuity, but is rooted in how Bruce sees himself and how he relates to Selina. “That time, on the street,” he tells Selina, “It was before… before the Bat… I was not fully formed. I was not yet… Batman. But when we saw each other again. Later. On the boat. I had… embraced that identity. We were meeting as Bat and Cat. It was my truth meeting yours. For the first time.”

I find it significant that Bruce, who is more of an idealist is the one who realizes their true first meeting was on the boat, while Selina, who is more of a realist, argues for the earlier encounter on the street.

Although it’s more of a happy accident, I find it fitting that in that Golden Age story, Selina was using the alias “the Cat” instead of the name Catwoman. So it was also in another sense that Bruce first met the Cat on the boat.

The villain of this issue is Magpie, who isn’t a villain seen much, but sh was present for a particularly significant story in Batman’s history. She first appeared in Man of Steel #3 from 1986, which contained the post-Crisis account of Batman’s first meeting with Superman. This makes her an oddly fitting villain for a comic about important first meetings.

Other than that, she isn’t a particularly challenging villain for Bruce and Selina, but she is a suitable foe to use to warn Bane that they are coming for him. And I love Selina’s perfect response when Magpie guesses that she is meant to take a message back to Bane. “Oh, honey, don’t you get it. He’s Batman. I’m Catwoman. We are the message.

The gorgeous art from Clay and Seth Mann gives us some iconic images of Batman and Catwoman, from the opening image styled after David Mazzucchelli to the last image of the Cat and the Bat standing together in front of a full moon. Plus, the depictions of Bruce and Selina as Mr. and Mrs. Matches Malone were fully as beautiful as the action scenes.

Twice in a row, King has delivered a pitch perfect issue. The only fault I can find is that is took us so many issues to bring us from the wedding issue debacle to this reignition of Bruce and Selina’s romance.

This amazing interlude in the City of Bane storyline should restore even the most cynical reader’s faith in King as a writer. Am I hyped up for Batman’s return to Gotham? To echo Selina, “Quoth the Kite-Man: Hell yeah.”