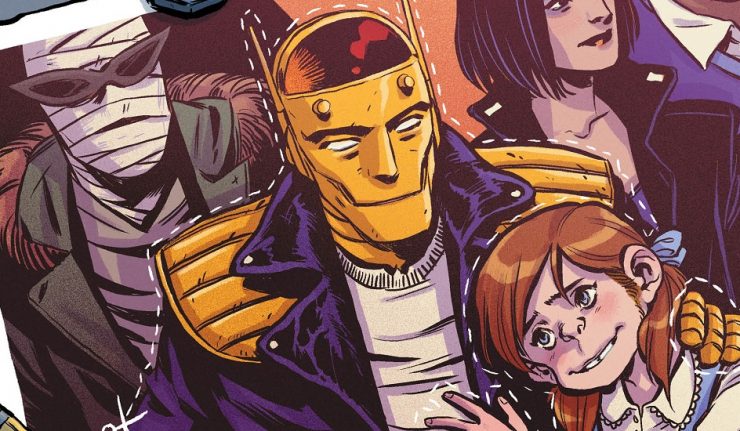 So, visualize a question in your head about the day, your life, a decision, and then for the answer, pick up a Doom Patrol comic book, new or old it doesn’t matter.  Open it randomly, without looking and put your finger on a panel.  THAT’S your answer!  And maybe, just maybe…a boy can join Robotman in Dannyland….  Getting back home however…

There are times when you read a comic that changes the way you perceive the medium itself.  Doom Patrol in the Young Animal era has been such a comic.  Gerard Way has drawn a lot of inspiration from Grant Morrison’s run in the early ’90’s.  With Doom Patrol: Weight of the Worlds #5, guest writer and artist Becky Cloonan not only builds on one of the motifs Way used in issue #3, the idea that there are more issues of this run than we’ve actually seen, but she also riffs on Grant Morrison’s breaking of the fourth wall that was so effective in his Animal Man comic from the late ’80’s.

There are lots of little details in the issue that are creative and sometimes humorous.  The basic idea that a kid can go into his favorite comic is perhaps not wholly new, but the manner in which it is executed is wonderful.  The boy has a vast knowledge of the comics he’s read, and they are comics the reader will recognize.  One that encapsulates the concept is the signed copy of Doom Patrol #2 that the boy pulls out of his bag.  It’s clever that the signatures of Gerard Way, Nick Derington and Tamra Bonvillain are clearly visible.  Besides simply being fun, in a way, it puts the characters in the space as the creators, much like Morrison’s Animal Man.

The boy in this story, “Clark,” it’s his last name…, is exuberant and joyful as he meets the characters and recognizes what’s going to happen next.  He’s disappointed he has to return home, but the end ties a nice bow on things as one realizes the issue also functions as an example of why people love comics.  It’s probably a bit of a cautionary tale as well, dramatizing why readers have to be careful not to “get lost” in the medium and neglect their lives.  The boy’s mother has been calling him to leave for school.

One of the themes that has been addressed in the first four issues of Doom Patrol: Weight of the Worlds is the idea that doing good for other helps oneself and can contribute to emotional/mental healing.  It’s not the main focus of the issue, but it is part of the subtext in Cliff’s appearance in this story.

Finally, this issue also sees the return of Dorothy Spinner from Paul Kupperberg’s Doom Patrol run back in the late ’80’s.  Dorothy’s powers allow her to bring fictional characters to life.  “Clark’s” excitement at seeing her alive after having read about her death many issues ago.  This is a great “meta” moment for readers who lament their favorite characters who have been killed off.

After reading Doom Patrol: Weight of the Worlds, you will feel better.  You will feel a little happier, a little lighter- you will feel that the “weight” has been lifted.  It’s possibly the only comic that is actually “good” for you.  And, I mean that in a mental/ emotional way.  It’s not all unicorns and sunshine, but it manages to put things in the proper perspective.  Gerard Way and Jeremy Lambert have taken this issue off, but Becky Cloonan and Michael Conrad make the transition seamless.  Plus, it pulls in nostalgic elements and references to creators of the past that are probably worth checking out already if you haven’t.  I can’t say exactly what it is, but I feel like “Clark” is a young Gerard Way.  No proof, just a feeling.  It is unlike any other series I can think of.