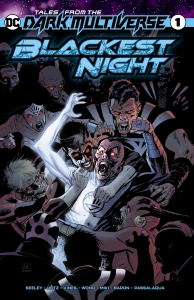 Tales From the Dark Multiverse: Blackest Night #1: What could be blacker than the Blackest Night? From the pages of Dark Nights: Metal comes a Dark Multiverse retelling of the Green Lantern event that changed the DC Universe forever…only this time, the Black Lanterns win! Now, 23 days after the apocalypse, witness the rise of Sinestro as the Limbo Lantern! Trapped between life and death as a White and Black Lantern, Sinestro seeks to save the universe-or end his miserable life-once and for all! Joined by Dove, Lobo, and Mister Miracle, the last living beings in the universe will put everything on the line to give their world one final chance.

Like the previous Tales From the Dark Multiverse volumes, this one is introduced by Tempus Fuginaut. Fuginaut is a somewhat mysterious new cosmic entity in the DCU, first showing up in Sideways, and currently appearing in Flash Forward.  His prime function appears to be guarding the Multiverse from incursions from the Dark Multiverse.

This series of one-shots seems very similar to Marvel’s What If? series, and Tempus Fuginaut is acting as DC’s version of the Watcher. He explores parallel universes, finding worlds where history diverged at some significant turning point. However, since Fuginaut is exploring the Dark Multiverse, the stories are all certain to end in tragedy.

The turning point in this comic is the Blackest Night event. This is DC’s first zombie-themed event, where Nekron enlisted dead DC characters as his Black Lantern Corps. Several deceased characters were temporarily brought back, and even a handful of cancelled titles returned for one more issue. 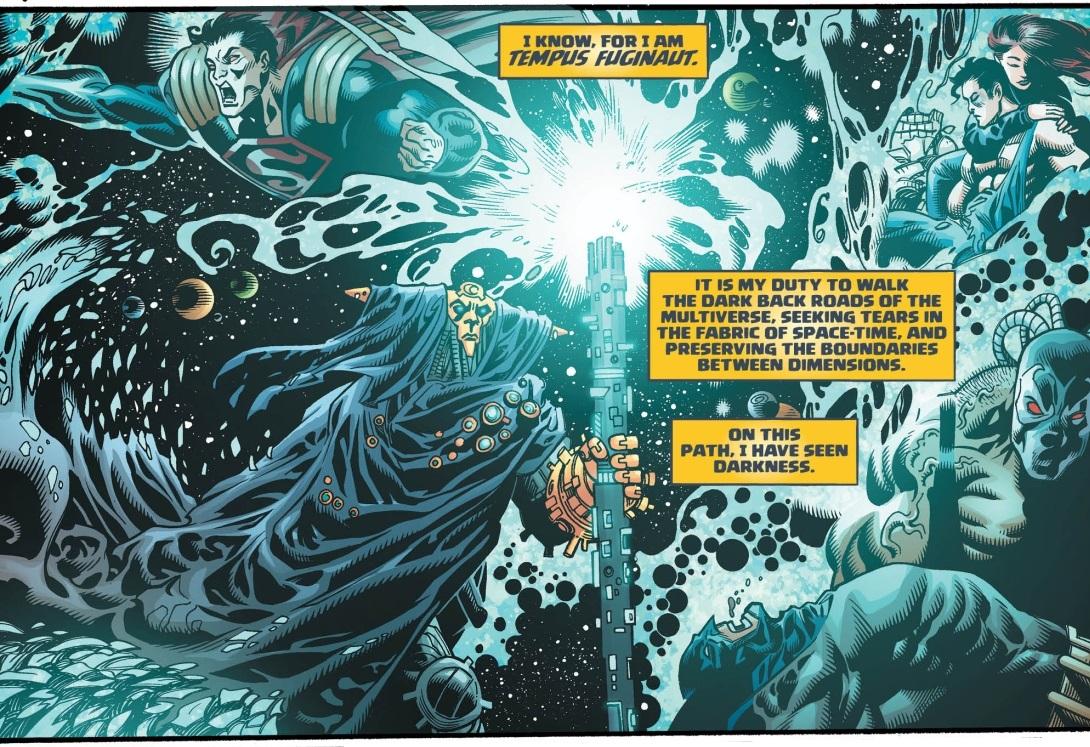 This is an interesting idea, that neither the White nor Black Emotional Spectrum energy trumps the other. With both present on the same individual, neither cedes dominance to the other – or is it because Sinestro is unable to truly master the power of the White ring?

With Nekron’s Black Lantern Corps spreading throughout the universe, most of the population of the universe is now dead, with nearly every sentient being now a Black Lantern. It is an interesting revelation to see who the remaining beings are.

These four survivors are Sinestro, Lobo, Dove, and Mister Miracle. Sinestro survives because of his White Lantern ring, Lobo because his healing factor makes him impossible to kill. But Mister Miracle is an interesting case. He has no special immunity from being a New God, as all the other New Gods have fallen. In actuality, he has survived this long due to his ability to avoid death, as he constantly does during his escapes.

But Dove is the key. As the avatar of Peace, she is largely immune to the Dark Lantern energy. And Mister Miracle has a plan use her as a conduit to take Source energy from beyond the Source Wall and use it to reboot the universe, free from the influence Dark Lantern energy.

And it almost works, except Sinestro chokes, leading to Dove being killed. However, Sinestro finally masters his control of the White ring, defeating the Black Lanterns. He then realizes what he must do. He uses Lobo in Doves place as the conduit and reboots the universe.

Although it seems that Sinestro is finally triumphant, he comes to realize that creating a new reality imprinted with the essence of Lobo is a violent and terrifying one. Sinestro is left, trying to escape this universe, looking for an escape into a better reality, which Fuginaut denies, sealing this reality off.

The art in this special is beautiful and well suited to the horrific contents. There is more than a little influence of Kelly Jones visible here. The artists have done a commendable job of capturing the horror of the Blackest Night series.

Being an alternate reality story, it’s pointless to try to pick nits in continuity. The important thing is that such a story is internally consistent, which Tales of the Dark Multiverse: Blackest Night #1 is. I have no other issues with the story. The story and the artwork are quite interesting, if rather gloomy. But the intention was to be gloomy, so that’s okay.

I am quite enjoying these Dark Multiverse specials. They offer a nostalgic look at some important junctures in DCU history as well as providing an entertaining new story. And they add a bit more depth to the original stories by showing how wrong things could have gone. And this particular installment was a fine alternate retelling of the original Blackest Night.