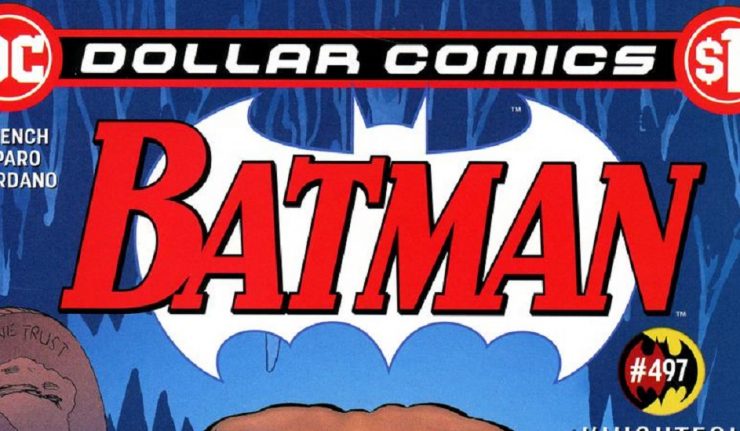 Just returning from a night out with the cowl, an utterly exhausted Bruce Wayne is shocked to discover an uninvited guest in Wayne Manor: Bane. The menacing monster of a man matter-of-factly states that he has known of Bruce’s super-identity all along. More so, now that the Venom Derivative – from which Bane gets his powerful strength and stamina – has reached its full pinnacle, Bane plans to destroy him.

Millions of casual fans were no doubt introduced to the character of Bane through Tom Hardy’s worthy portrayal in The Dark Knight Rises. (dir. Christopher Nolan, 2012.) But in Dollar Comics- Batman #497, we get to see the super villain’s original artistic depiction.

Sporting a Lucha libra style mask, and Wolverine-levels of body hair, Bane’s grotesquely disproportionate musculature completely dwarfs Hardy. What has remained constant between the two is Bane’s ability to communicate – with total confidence – the fact that he is unintimidated, unbeatable, and unwavering in purpose.

And what is that purpose?

“Gotham, the ultimate prize!” Bane announces to the bruised and battered Bruce Wayne. “You have it, I want it.” This beast-among-beasts’ obsession still burns strong even to this day. A newer glimpse of which can be seen in the flagship Batman comic series’ event, “City Of Bane.”

And so, without any further theatrics, the two titans clash. The entirety of Wayne Manor is engulfed in a tornado of fisticuffs. From the destruction of the den, to the living room rendered un-liveable, and finally down into the Batcave, it becomes obvious that this boxing match is no contest at all. As Bruce’s punches render no effect whatsoever on the chemically enhanced giant, Bane proceeds to toss Batman around like a rag doll.

Batman’s pain marathon closes with a popular image. It’s a famous shot that has successfully crossed over from comics to film and back. But Aparo’s was the first! Reliving it through Dollar Comics- Batman #497 will cause anyone to cling on to their fragile humanity. Bane’s final stroke is a move truly befitting of the wrestling mask he wears. The overhead shoulder press, and body drop!

Even worse is that the utterly decimated Batman is left alive by Bane. With his back broken, Bruce Wayne sinks into the torturous contemplation that he knows all too well.

Across alternating panels during the beating that Bane delivers is a washy blue shift into Bruce’s memories of his recent battles with Arkham Asylum’s freed inmates. Aparo draws these flashbacks as if seen through a bleak, drab, carnival fun house mirror. These haunting visions of Bats vs. Gotham’s Rogues’ gallery serve as a harsh reality check for Wayne. Through them, the greatest detective realizes that it was Bane’s plan all along to tax the Batman with the previous onslaught.

Doug Moench, (Deathlok, Moon Knight, Slash Maraud,) is no stranger to brooding internal dialogue. But the despair on display here reaches a whole ‘nutha level! Doug saturates Bruce Wayne’s inner voice with some truly heartbreaking poetry. In between Bane’s bone shattering punches Bruce convinces himself that he’s been “Racing for death my whole life,” and that all of his previous efforts were simply, “a prelude to a fall.” And now, with Batman’s energy completely depleted, he cannot beat the enemy at hand.

Originally published in 1993, the “Knightfall” story arc, and more specifically, this issue, titled, “The Broken Bat,” manages to stand the test of time. Except perhaps in its slightly dated choices for action sound effects. The dramatic onomatopoeia are very old school and range from the “WUMP” of a head charge to Batman’s gut, to the “SKRASH” of Bruce’s face-first contact with the delicate glass door on an old grandfather clock. But the brutality of the scene certainly outweighs the funny sound effects. In this 21-page book Batman endures 13 pages of abuse from the monstrous Bane. Mike Tyson would be envious of the jolting “HWOK” brought on by Bane’s fierce uppercut as Batman is pinned under the Batcave’s iconic giant penny. And literally a “CHUMP,” when Bane stomps Batman to the floor like when someone pushes the trash deeper into an overflowing trashcan.

Additionally, from a compositional standpoint, the backgrounds are often plain and without detail. Because of this, the setting sometimes feels unimportant. But perhaps that was Aparo’s choice, to concentrate only on the two mortal foes as they battle like enemy animals.

Dollar Comics are perfect for everyone. From the casual reader who can only commit to spending a buck, to the die hard collector that considers these an essential piece of comic book history. More specifically, this issue is an undeniable classic. Let this next sentence sink in. This is the fight that Batman lost… and it is an Venom-Derivative-filled, roller coaster of epic proportions. 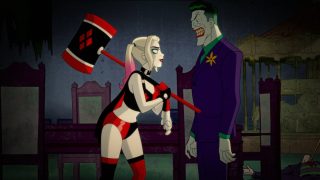