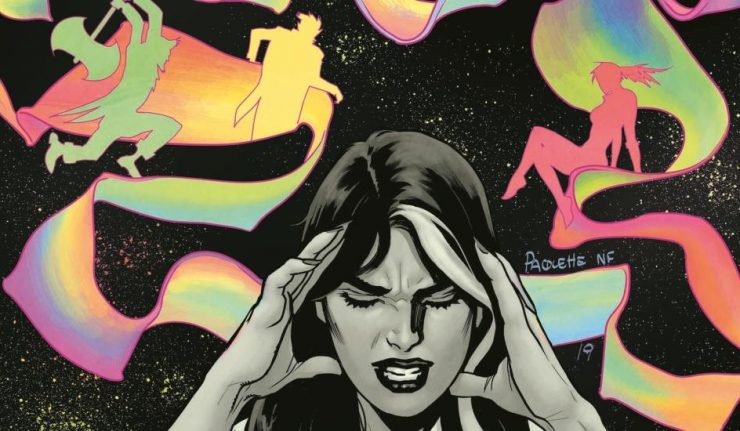 The Dreaming #18: Rose Walker was a vortex, once. As a vortex, she draws dreams to herself…and she is drawn to them. And it’s a good thing, too, because Dora, Matthew, and Abel are in well over their heads in the waking world-a world that is slowly destroying itself, as Wan’s plans for the collective unconscious of humanity have come to pass!

As The Dreaming approaches its final issue, Simon Spurrier is drawing all the threads together. The end is starting to take shape, and the storylines are starting to reach their resolutions.

It seems fitting that Rose Walker would play an important role as the series nears its finale, since she was also at the centre of the one of the first story arcs from Neil Gaiman’s original Sandman series. The former vortex that threatened the Dreaming and the waking world now holds an important key to saving both, bringing the story full circle.

And that key is the information to save Dora and unlock her full power. As an imaginary being, Dora is fading from reality, but Rose lets Dora know that she doesn’t need anyone else to believe in her, as long as Dora believes in herself.

And with that epiphany, Dora remembers that Morpheus had hidden his greatest treasure at the end of her story – the Dream Ruby. Morpheus had put much of his power into this gem and which Dora takes with her back to the Dreaming.

And there she meets Lucien, who has returned from his meeting with Death. Lucien tells the gathered dreams, “…I have received a message. A message from him. An instruction he’s been trying to give us all along… We can finally do as he asks. We can call the Master home”.

Does this truly mean that Dream will be returning to his realm to remove the usurping Wan? Or some other iteration of Dream? Or will a new Dream rise to replace Daniel as he replaced Morpheus?

Spurrier’s story is hurtling towards its climax. Unfortunately, it appears that the end of this story will be the end of the title as well. The Dreaming has been announced to be ending with issue #20. However, the Sandman Universe titles will be continuing, with Spurrier moving on to writer John Contantine, Hellblazer. Perhaps DC will revive The Dreaming for another volume someday.

The Dreaming has been a fond reminder of Neil Gaiman’s masterful Sandman series, while giving us an engaging continuation of the story. I look forward to seeing how Spurrier wraps up his own epic addition to the Sandman mythos in the final two issues.