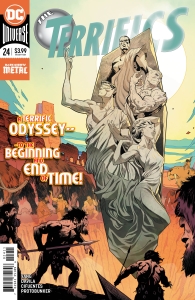 The Terrifics #24: “The One Where Bizarro Screws Up Time” part two! The Terrifics have traveled to the very beginning of time to put an end to Bizarro’s reign of clock-clashing terror! But who are the mysterious angels helping Ms. Terrific navigate the void? And who are adklj;askjwe! Hey, Bizarro…writing solicit text is my job! Hey, stop it! What are you-ow! BIZARRO AM #1. MY VILLAINOUS ADVENTURES WILL BE IN BOOK FOREVER! ME DISLIKE CHEESE AND LOVE SUPERMAN. BIZARRO OUT.

I just love how much this Bizarro storyline keeps throwing random craziness at us. Even though it seemed to start off as a Year of the Villain tie-in, it’s gone off on a number of completely unexpected tangents. So where does The Terrifics #24 find the team? At the very End of Time, of course.

And it looks like Plastic Man’s Catholic upbringing is being proven right, as the Terrifics find themselves facing the literal Four Horsemen of the Apocalypse. Well, not actually, it turns out that while the team is indeed at the end of time, they are in a virtual simulation as well.

The Noosphere returns, having eventually become the greatest power in the universe by outliving everyone else. The Noosphere is housing the remaining members of humanity in a virtual reality simulation. The Noosphere, while unable to save the human race from extinction, is able to expand the final second of time, giving them a temporary reprieve.

I’m glad to see that Mister Terrific’s decision to allow the Noosphere to continue to exist has proven to be the right one. Instead of becoming an evil tyrant, the Noosphere has become the protector of humankind during the universe’s final days. It also leaves a loophole for the Noosphere to still return in a future storyline as a threat. We only know that the Noosphere eventually becomes a force for good, but the team might still encounter it again from an earlier point in its history, where it might not be so benevolent to humanity.

And it seems that Ms. Terrific has undergone an interesting transformation. At the beginning of time, she found the entrance to a place outside of time. There she found “beings who were like me, but also not”. These beings gave her powers: “They gave me wings that can fly all of history! And a sword that can cleave time itself!”.

It seems somewhat fitting that Ms. Terrific has gained a new angelic appearance and powers, given her strong religious beliefs. And I like that there is a greater differentiation between her and Michael, instead of her heroic identity being essentially the same as Michael’s, but gender-flipped.

And typical of the story’s random madness, I loved when Bizarro and the Terribles decide to pitch in and help the Terrifics fight the Four Horsemen solely because it wouldn’t make any sense, thus making it the most logical thing for Bizarro characters to do.

And I loved the Grant Morrison-esque fourth wall break of Ms. Terrific flying off the comic page and asking the reader, “You don’t mind if I borrow this page from your comic book, do you?”.

And it was a nice touch for Paula to have granted Boyzarro’s wish to spend time with his father by giving him a bottle in which she has trapped Bizarro and the Terribles in an endlessly repeating moment in time. In a sense, this also grants Bizarro’s desire to relive his moment of triumph in an endless time loop.

While this story was a bit confusing at times, it wasn’t insurmountably so. And it gave us some wonderful bits of silliness like the kid versions of the Terrifics. This story was a hell of a lot of fun, but I think we’ve all had our fill of time loops and Bizarro-speak for the time being.

The Terrifics is a unique gem that is unlike anything else in the DC lineup. This story demonstrates that a comic book can have a healthy dose of silliness without diminishing the overall quality. The Terrifics puts the fun back in funny books.