Review: Batman And The Outsiders #10

Review: BATMAN AND THE OUTSIDERS #10 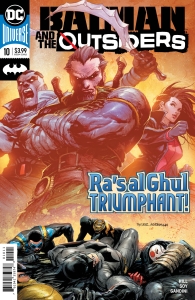 Batman and the Outsiders #10 begins with a heart-to-heart talk between Batman and Sofia Ramos. Batman offers her an opportunity of returning to a normal life. He tells her, “You don’t have to wear a costume. You don’t have to fight. I can make certain you have a life outside of this vengeance… Tell me you want out of this, and you will be out”.

Instead, she asks if the Batman, “Can you make me like you?”. To this, the Dark Knight replies “Like me? Never”. Sofia doesn’t realize how much this response says. Batman realizes that no matter how impressive and formidable a hero he seems, that his existence is far from enviable, and does not wish it on anyone else.

However, Bruce is willing to help Sofia to learn to discover the person she needs to be, whether that person an ordinary citizen or costumed crimefighter. And it appears that Sofia is becoming inclined towards the latter. I suspect that she will soon be joining the Outsiders soon as Babylon.

But will Jefferson Pierce still be in the Outsiders by then? Black Lightning has joined with Lady Shiva to gain his own revenge on Ra’s Al Ghul. It appears that Shiva has broken with Ra’s, but is this a ruse? Kaliber confronts them, and seems to confirm her story. But could this be a deception to give her cover? Or is she playing her own game? 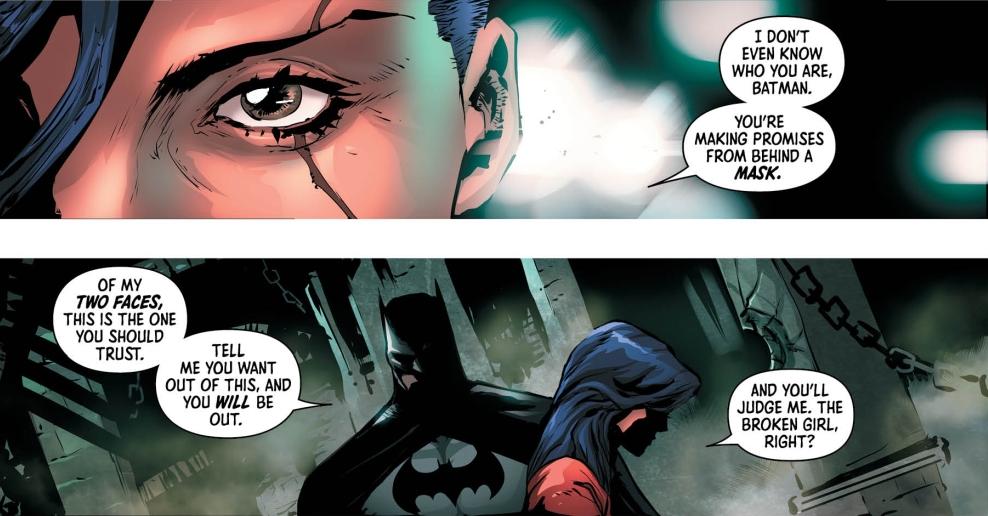 I picked up on a significant comment from Batman to Sofia that speaks volumes about the approach Bryan Hill is taking to the character of Batman. Bruce states, “Of my two faces, this is the one you should trust”. It would seem that Hill is among those who believe Bruce Wayne is the disguise, while Batman is the true essence of the character. Bruce is a deception that is put on to achieve the purposes of the Batman. While the Batman carries out the true work that gives his life purpose and meaning.

We even get an example of this as Bruce Wayne meets an informant. The meeting seems rather uncharacteristic for a billionaire playboy, causing the informant to express her bemusement at the odd behaviour of billionaires. I also found it significant that Bruce offers to pay her double. Not for more information, but to distance herself from the situation. Batman rightfully places her safety as a higher priority than the information she can supply for him.

Plus, I can’t help wondering if the repeated mentions of trouble brewing in Markovia is going to lead the team to encounter some familiar faces from the team’s previous titles. Geo-Force is almost certain to make an appearance, being that country’s king. But might Halo or Looker also pop up? And will Metamorpho make an appearance, or would his membership in The Terrifics preclude an appearance in this title?

While Hill’s storyline has been interesting so far, it has been a bit of a slow burn. I am starting to feel that the impending major confrontation between the Outsiders and the League of Assassins is a bit overdue. While this has been an enjoyable story, I am starting to feel a bit impatient for it to conclude and move onto the next story arc. 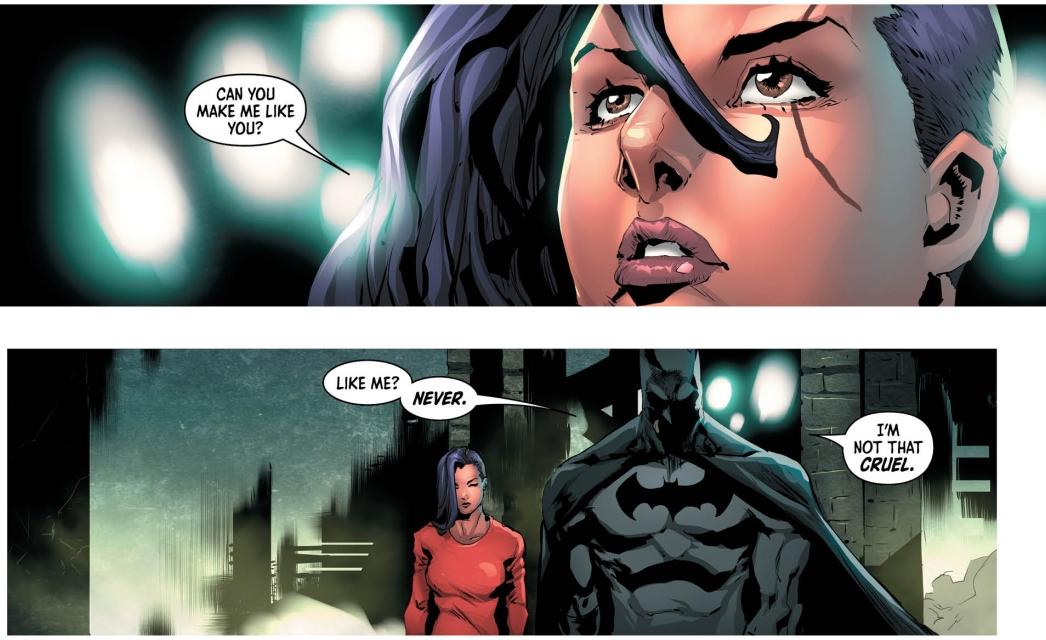 Batman and the Outsiders incorporates enough of the original title’s elements to feel like a true successor to the original. But it also includes plenty of new elements, making it more than a rehash of its earlier incarnations. Bryan Hill has produced a captivating reimagination  of the Outsiders for the post-Rebirth era.