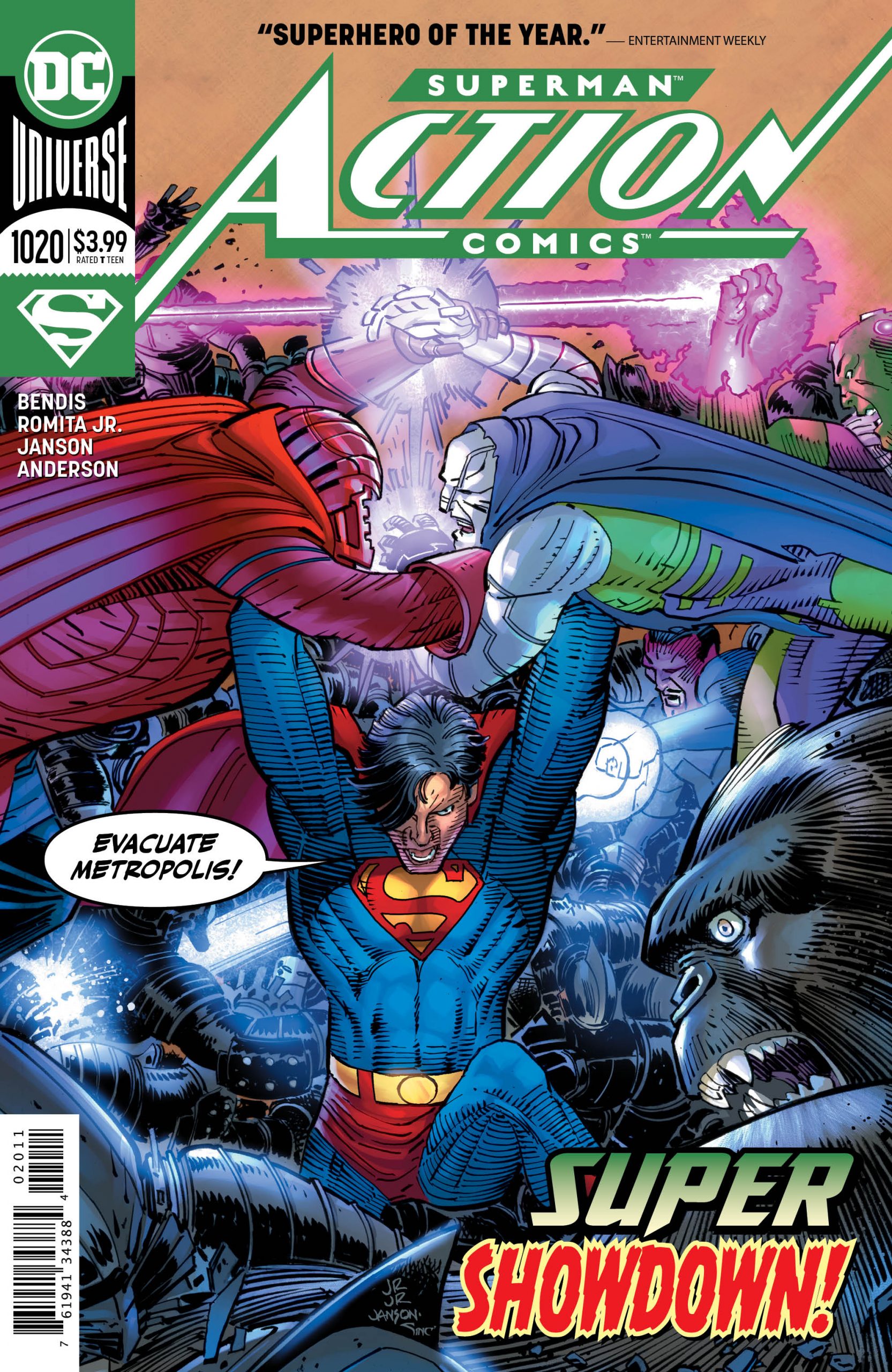 As the story circles back, Action Comics #1020 fills out how the Justice League and Young Justice came to be in Metropolis in the first issue of this arc in Action Comics #1017.  Pointless battle with the Legion of Doom then ensues. 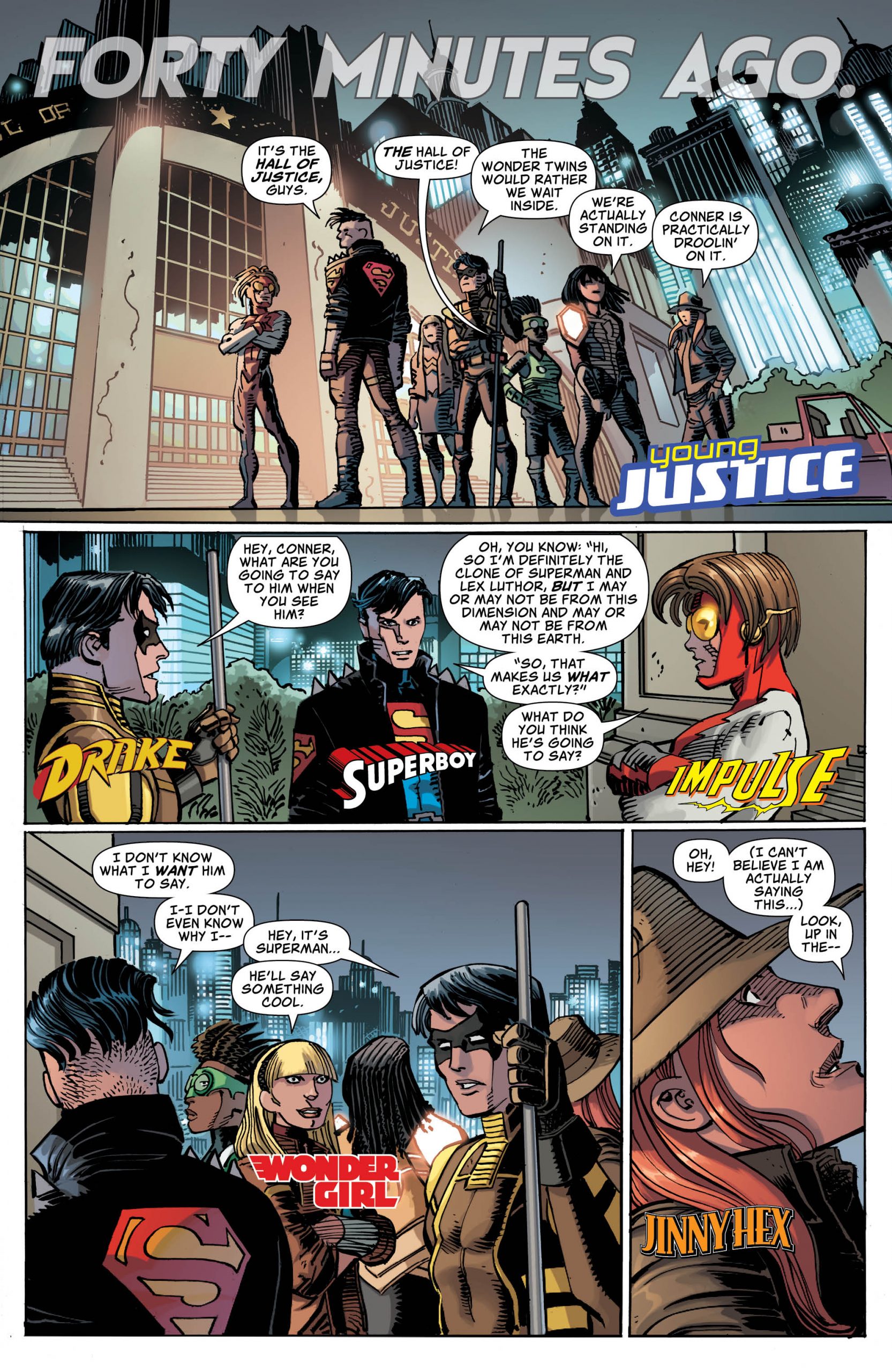 Negatives (Hang on, there will be multiple sections!)

Unfortunately, the first things that stands out about this book is the art by John Romita, Jr. and Klaus Janson.  I can remember a time when JR,Jr on Amazing Spider-Man was a wonderful thing to behold.  And while no one expects artists to remain stagnant in their development, this is not a positive change in style.  I can’t help but be reminded of an anecdote about Alex Toth’s stylistic development.  He wanted to simplify.  I can imagine this is what Romita is trying for, a simpler approach with things broken down into basic shapes.  Unfortunately, it comes across as sloppy.  While he maintains a dynamic aspect, the loss of basic anatomical principles make it look less intentional and more like incompetence.

While I’m no expect on Bendis’s Young Justice, in comparing this issue with Action Comics #1017, an inconsistency has crept up.  We know that Young Justice is part of this battle, but that sure looks like Damian Wayne in the splash page for issue #1017.  This issue we see Young Justice arriving and joining Superman and Tim Drake is shown in his new (and terrible) Drake identity.  So, what exactly is happening?  Did Romita not know who he was drawing?  Did Bendis forget who was in Young Justice?  Did Bendis write the script for #1017 before introducing the Drake identity?  No matter how you slice it, it feels sloppy and careless. 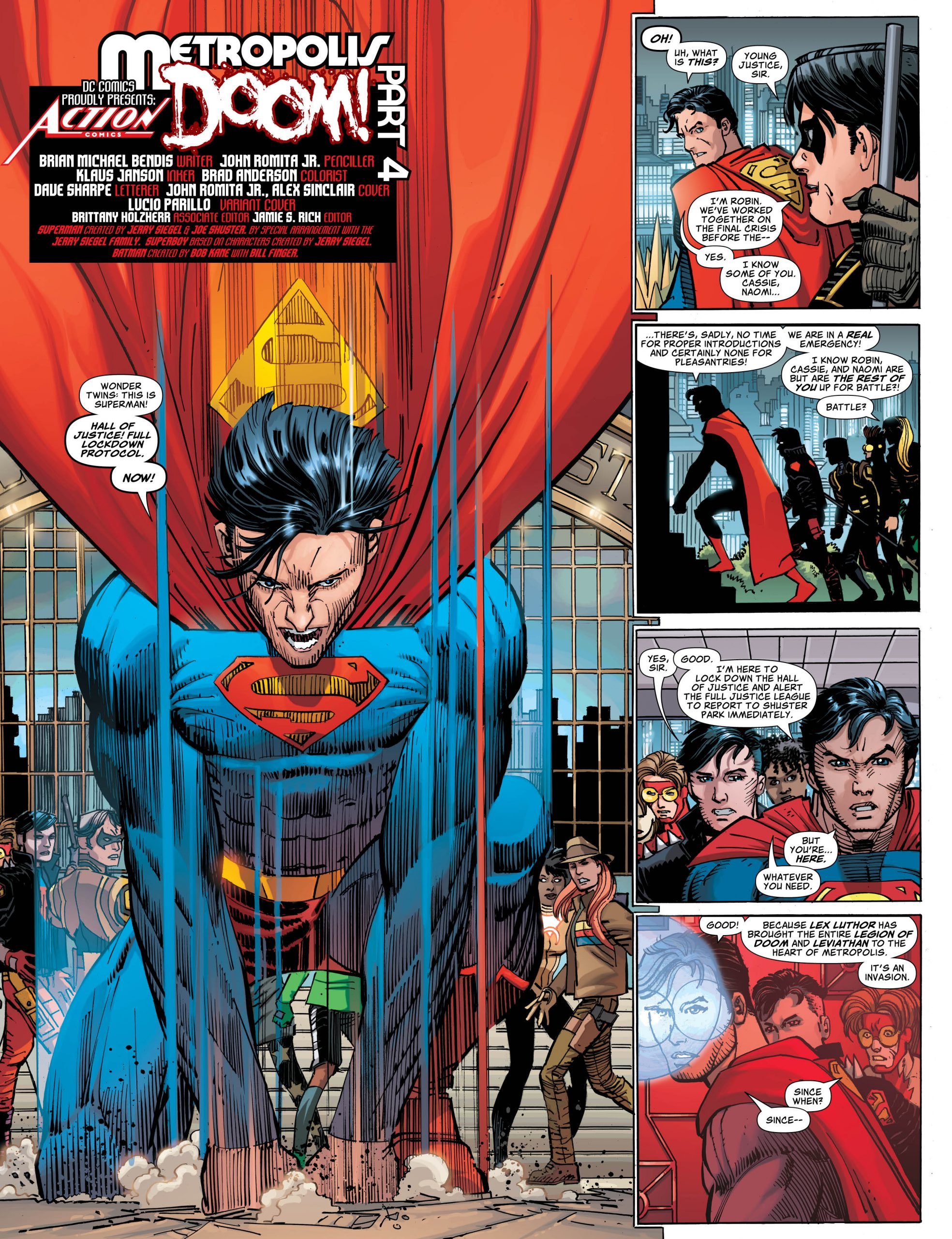 Bendis is attempting to tell this arc using the technique of non-linear storytelling.  This can be an inventive way of telling a story.  It can heighten the drama and build the tension if done correctly.  Unfortunately, this particular arc is suffering from a real lack of story beats.  There is a basic structure, but Bendis’s very slow burn is pointing out his deficiencies in “Doom.”  The non-linear aspects are all over the place.  There isn’t just a now and before, it’s 40 minutes ago, 8 minutes ago, 25 minutes ago, one hour ago over multiple issues that one has to try and pull together.

Bendis doesn’t create memorable moments to connect the timeline.   In a trade, the reader can turn back the page, and perhaps this will alter the effectiveness in this arc.  However, as read as single issues a month apart with a concept that just isn’t THAT interesting, it’s extremely difficult to put the timeline together to make sense of the events he tries to bring together in Action Comics #1020.

It’s difficult to feel the weight of the threat in this issue.  It  just feels like a random battle.  There’s no real sense that anything is going to be significant.  We already know that in a couple days Metropolis is back to normal when Superman reveals his ID in Superman #18.  This is actually stated in Action Comics #1018.  So, we already know that the events of Superman #18 happen after this seemingly protracted battle with the Legion of Doom.  Bendis has undermined any tension in his own story.  It becomes something to simply get through, because, in a couple days…everything is fine….  Why would anyone care about this battle?

Sometimes a “battle” issue can be save by great character moments.  Unfortunately, the interactions between Superman and Young Justice just feel awkward.  Outside of the major continuity questions involving Conner Kent and Superman, after reading the issue, one has to wonder how many times Tim Drake and Superman have met.  The overeager Drake approaches Superman like he’s only met him once or twice.  Now, certainly, Tim and Superman have a stronger history than a couple odd meetings.  Certainly, the new Drake identity hasn’t confused Superman?  The interaction is very strange and doesn’t feel genuine.  It comes across as if it’s written by someone who doesn’t really know the characters. 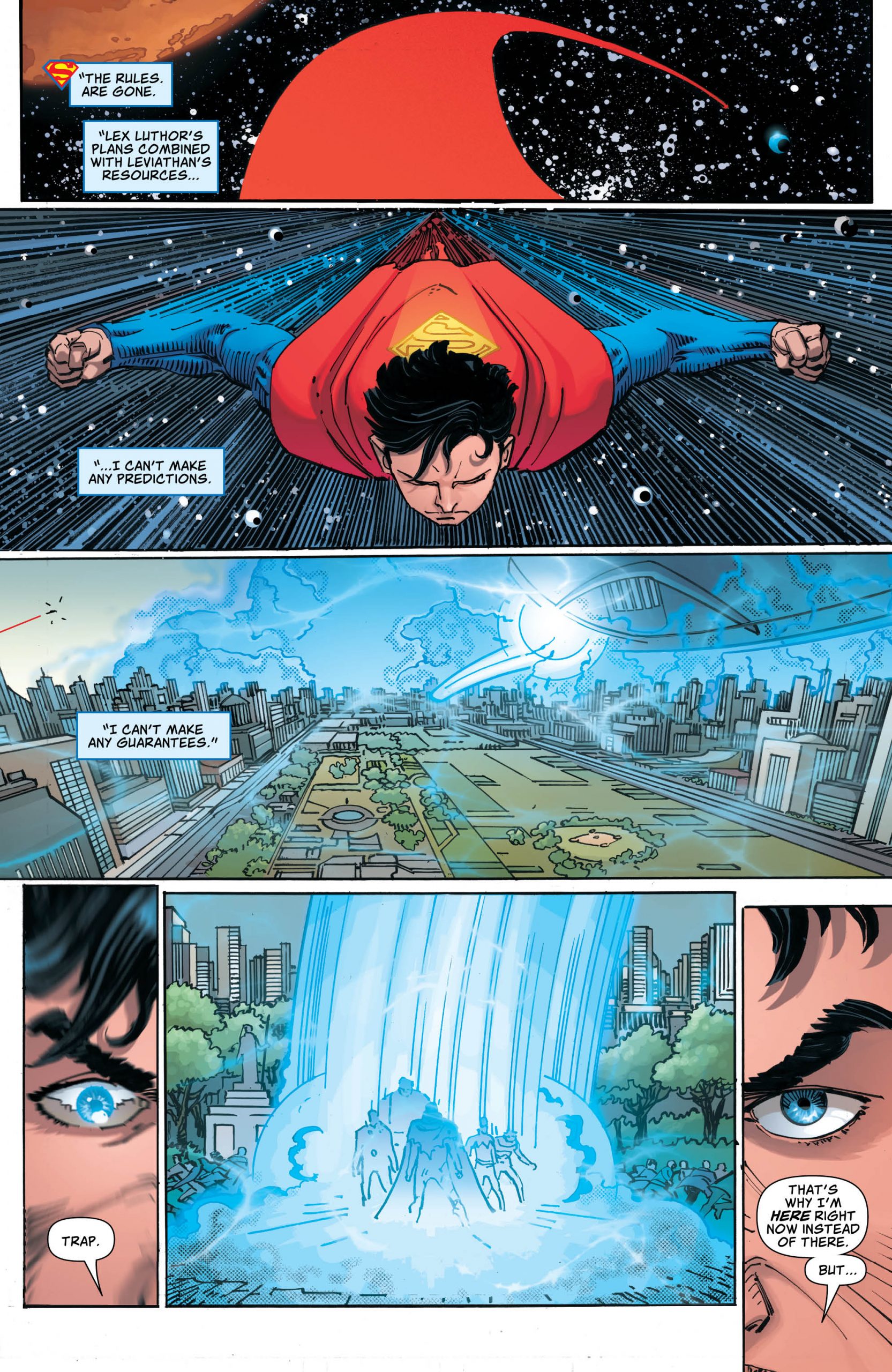 So, why is Young Justice at the Hall of Justice?  Am I missing something?  Did something happen in an issue of Young Justice that would explain why they are there?  If you don’t think about it, it’s ok….  But, if you THINK about it, very little of this issue makes sense.

Action Comics #1020 feels very amateurish.  Besides the very distracting art by Romita, Jr. and Janson, Bendis’s story is just not working.  Non-linear storytelling can be effective, but the specific details are just not that memorable.  It’s extremely difficult to keep up with what happened where and when and with whom.  He’s relying on readers to remember minutiae issue to issue and the details just don’t make sense as he tries to bring things together before next issue’s conclusion of the “Doom” storyline.  Some of the details may not really matter, Tim Drake’s changing costume between this and issue #1017, but it is sloppy.  More concerning are things like apparently placing the Hall of Justice in Metropolis.  And why were Young Justice there?  It just comes across more as cross promotion of books than anything else.