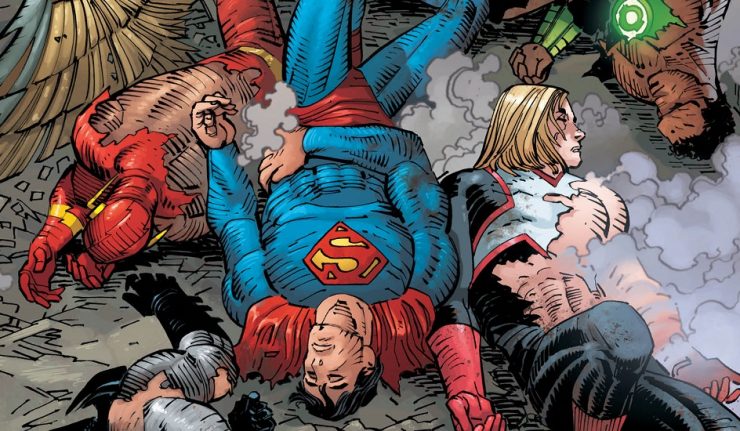 The Legion of Doom has come to Metropolis! Superman and the Justice League have been defeated!  It all starts with Clark’s interview with Leone and ends with the destruction of the Ace Club- only Superman and Lois can figure out how it’s all related.

The single best thing about this issue is Clark going to Lois to discuss the conundrum of the destruction of the Ace Club.  It’s nice picture that Bendis paints a of the couple working together and Clark relying on Lois help him talk through the situation.  Oddly, this calls into question Bendis’s whole contrived status quo for their relationship.  When he established their “separation” back in Action Comics #1004, it felt forced and awkward from the beginning.  Oddly, despite the idea that Lois needed her space, she’s been plenty involved in Superman’s life in the ensuing issues and Action Comics #1017 makes it clear that Clark needs the interaction with Lois and that their separation is still doesn’t quite work for the characters.

Bendis’s dialogue often feels awkward or uneven.  It’s obvious he’s trying to mimic the way people really talk, but it doesn’t always serve the story well.  Legion of Super-Heroes #1 was probably the worst example of this in his DC work so far, but Action Comics #1017 suffers in a similar way.  There are lots of words, but the conversations between characters don’t always contain meaningful content.  Or, if it does, it’s left untouched to sit for issues and issues.  Perry White’s classic rant is much more entertaining and functional, even if it’s over the top and a bit of cliched.  It makes Perry feel familiar.

The issue is put together in such a way that by the end the reader should figure out how the story led to the opening pages.  However, this was not very effective.  It wasn’t a no brainer that the Legion of Doom would take down Superman and friends.  But, even if it was, there’s a missing story there that would’ve been interesting.  The subtlety of Lex’s “You will know,” in response to Superman’s query about what it’s going to take to get the Legion of Doom to leave Metropolis alone is not enough to carry the conclusion of the issue.  In this case, “how we got to this point” how we got to this point feels more significant than is actually demonstrated.

Plus, it doesn’t really make sense how this all fits in to the larger “Justice/Doom War” in Justice League, considering it appears to feature all the same characters.  While continuity between titles doesn’t always have to perfectly dovetail, it’s nice when it does.  Bends even tries to mention other things going on in the DC Universe with his Daily Planet page at the end of the issue.  There could’ve been an attempt to make things fit together.  Consequently, it’s just sort of redundant and anticlimactic after reading Justice League #36.

All artists’ styles change over the years.  Unfortunately, John Romita, Jr’s current style is not all that impressive.  While there is an expressive quality to it, his draftsmanship is not what it once was- it appears sloppy and rushed.  It could be an acquired taste.

Finally, a small detail that stands out- the Ace Club.  It’s not clear if this is supposed to be Bibbo Bibowski’s Ace O’Clubs or some other establishment.  If it’s Bibbo’s place then it’s the wrong name.  If it’s not….are there really two places in Metropolis with similar names?  This also seems sloppy.

This issue tries to play off the “Year of the Villain” event, but falls well short of feeling significant with it’s similarity to this month’s Justice League #36.  The other plot elements of Leviathan and the Invisible Mafia.  There’s not a really compelling story being told.  While it’s clear Bendis wants this to be a huge interconnected epic, the overall pace feels slow and it’s just taking too long to get anywhere.  The added element of Luthor and the Legion of Doom aren’t making it any easier for him to tell a good story.  Action Comics #1017 is a great example of the mediocrity of Bendis’s run on Superman.