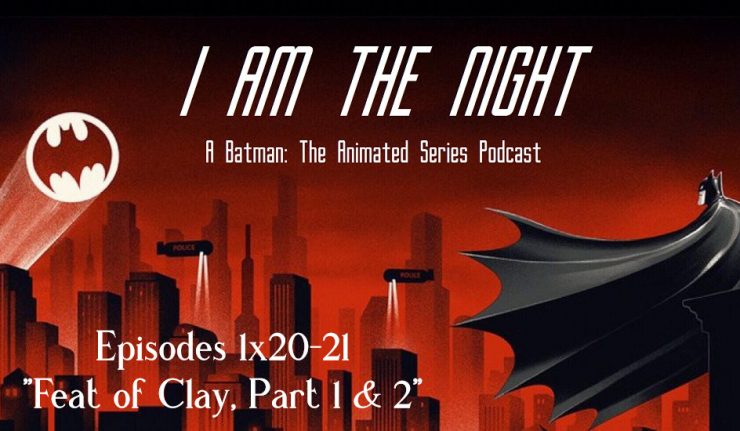 Welcome to another episode of I AM THE NIGHT, a podcast dedicated to breaking down every episode of Batman: The Animated Series. Each week, the wonderful Steve J Ray (reviewer at DC Comics News, as well as Editor-in-Chief of our sister site Dark Knight News) and a guest will sit down and dive cowl first into an episode of the greatest animated series of all time.

In this episode, Steve is joined by fellow DCN and DKN writer, and his son, Adam Ray to talk about the 20th and 21st episodes of season one of Batman: TAS, the two-parter entitled “Feat of Clay”. So sit back, put on your cape and cowl, and prepare yourself for a journey into the darkness!

Feat of Clay – Part 1: Bruce Wayne is framed for the attempted murder of Lucius Fox. The real perpetrator is an actor and master of disguise named Matt Hagen, who was disfigured in a car accident years ago. In order to keep his fame, he secretly started working for Roland Daggett, who provides him with a monthly supply of an addictive face cream known as Renuyu (a pun on “Renew You”) that can temporarily reshape his face back to normal, and who wants to take Wayne Enterprises over for marketing expansion. For botching the murder, Hagen’s supply is cut off, and when he breaks into Daggett’s lab for more Renuyu, he pays the price dearly when Daggett’s men drench his face in the formula and force him to swallow liters of it to avoid drowning. Meanwhile, Bruce Wayne is arrested and taken into custody, charged with the assault on Fox.

Feat of Clay – Part 2: Bruce Wayne is released from prison on bail. Hagen, as it turns out, survived the murder attempt on him, but at a high cost: the formula entered his body and soaked every single one of his cells, turning him into a shape-shifting mutant. With his newfound powers, Hagen, now calling himself Clayface, decides to take his revenge on Daggett and his men, and Batman must bring Daggett to justice and stop Clayface before innocent people are hurt.

“I Am The Night” Theme by David B. (www.twitter.com/DavidBMusic21)

Be sure to subscribe on Apple Podcast, Spotify, Stitcher, or Google Play, and if you like what you hear, please give us a 5-star rating and review!