Retro-Review: Sword of the Atom

Retro-Review: Sword of the Atom 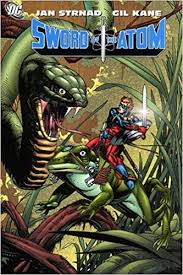 Sword of the Atom began as a four issue mini-series published September through December 1983.  It was followed up with three double sized specials published in the Summers of 1984, 1985 and 1988.  This Sword of the Atom collection consists of all of the above material.  It’s a hefty tome that tells Ray Palmer’s adventures in the Amazon Rain Forest with a race of diminutive aliens stranded on Earth.  However, he’s believed to be dead to the world at large and his wife, Jean Loring has moved on with another man.

Ray discovers that Jean has begun an affair with new law partner, Paul Hoben.  Seeking to give one another space, Ray ventures to South America in search of a White Dwarf Star fragment.  He runs afoul of drug smugglers and in the resulting plane crash, Ray is stuck at his 6 inch size.  What follows for the course of the chapters containing the original mini-series is more similar to a Science Fiction or Fantasy novel as the now normally powered Atom must rely on standard athletic skills than his trademark size and weigh changing mechanism.  Ray’s journey is not unlike that of John Carter of Mars, Edgar Rice Burroughs’ creation. 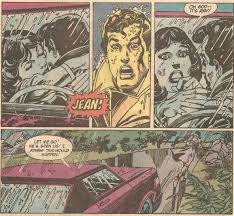 The subsequent specials explore Ray’s decision to stay in the Amazon with the aliens and his new girlfriend Princess Laethwen.  Though Ray eventually goes on to play a role in the core of the DC Universe after his return in Power of the Atom #1 (1988), Sword of the Atom leaves Ray’s fate open ended.

In the mid 1980’s, DC gave the Atom a makeover.  The task fell to Jan Strnad and Gil Kane.  By placing the Atom in a Sci-Fi/ Fantasy genre, Strnad and Kane re-imagined Ray Palmer’s skill set while also growing his personal story.  By giving Ray and Jean marriage problems, the Atom’s story becomes very mature.  It’s a real world issue to which many can relate.  It contrasts nicely with the Sword and Sorcery evoked in the Atom’s adventure in the Amazon Jungle.  Interestingly, both aspects of the story put Ray Palmer in new territory in both his personal and heroic life.

It will be obvious after thumbing through a few pages of this book, that the art work, almost exclusively by the legendary Gil Kane is outstanding.  Kane began his career in the Golden Age of Comics with MLJ Comics, the company that would become Archie Comics.  By fifties he was working at DC on Westerns and Science Fiction stories.  This led him to being the first artist on the Silver Age revivals of Green Lantern and the Atom, two characters with which he will always be associated. 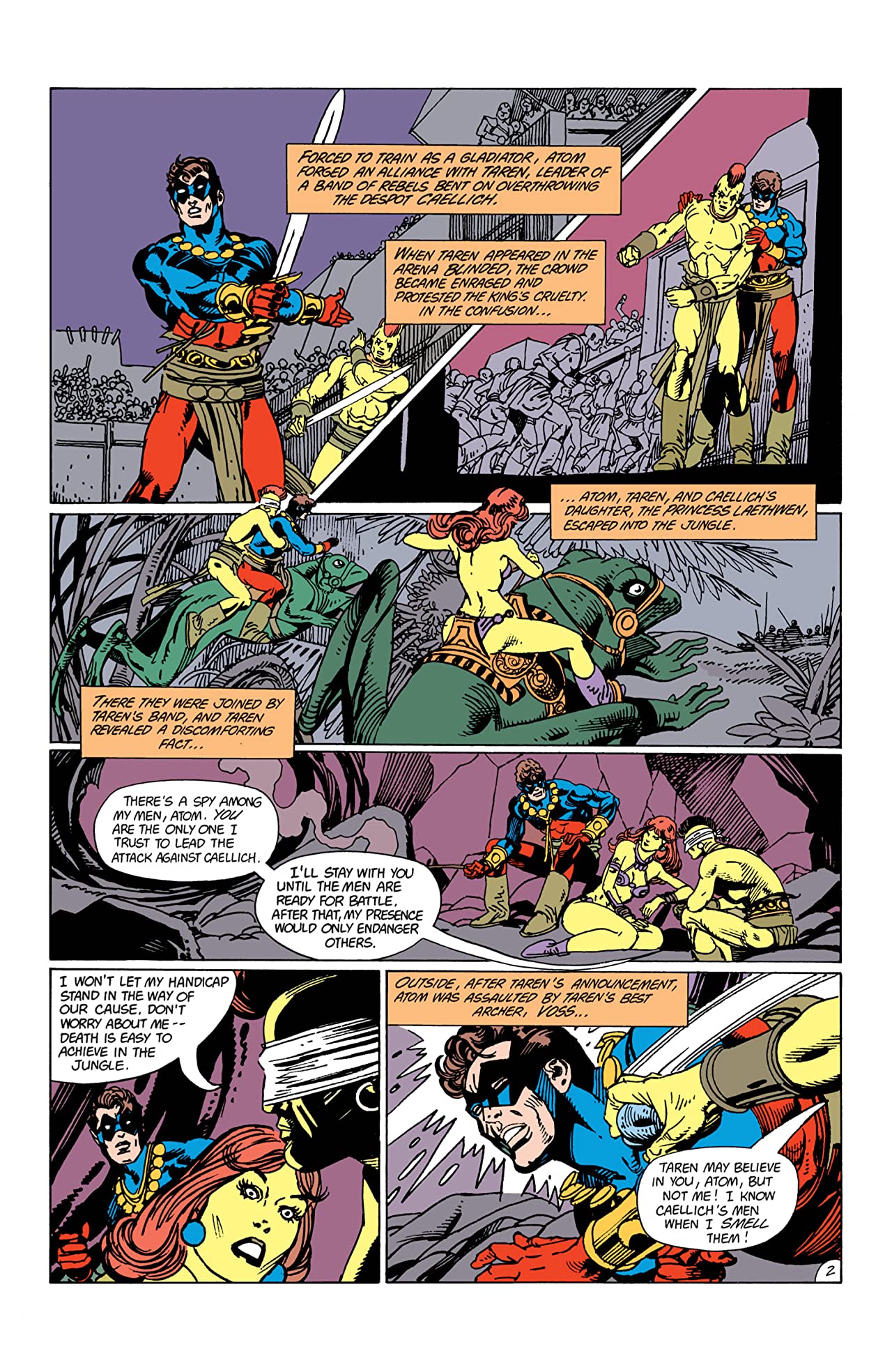 It’s a real treat as Kane inks himself on Sword of the Atom, and it’s absolutely the best way to view Kane’s work.  His action scenes are dynamic and explosive.  He individualizes every face and delivers a wide range of emotions seemingly effortlessly.  His anatomy is spot on and his skills are well-suited to depicting the heroic ideal.  While it’s obvious he well suited to drawing the Atom, having worked on the character for many years in the ’60’s, he’s at home with the Fantasy genre as well.  Kane not only worked on Marvel’s Conan the Barbarian comics, but also John Carter, Warlord of Mars, Marvel’s series of the Burroughs’ character.  Kane uses that experience to great effect.

Perhaps, the single best aspect of Sword of the Atom is the complex depiction of the Ray-Jean-Paul relationship.  It begins with a scene in which Ray clearly feels cuckolded, but it is explored almost immediately, as Ray sees that he may have a role in having pushed Jean away.  As he decides to leave for a while to facilitate some space, he’s oblivious to the complexities of Jean’s emotions.  This sequence recalls the romance comics that were popular in the ’50’s. 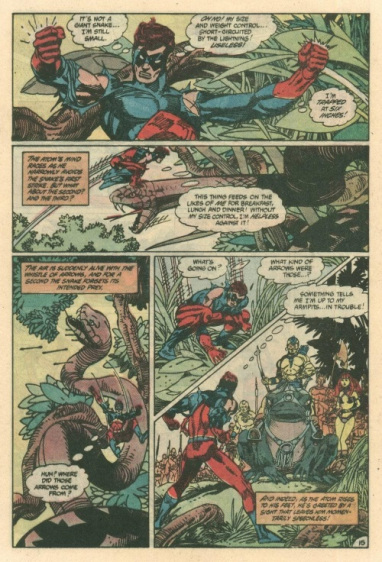 It doesn’t end there, however.  After Ray decides to stay in the jungle, he still finds himself linked to Jean and Paul.  They manage to find some sort of middle ground as Paul Hoben actually assists Ray on an adventure.  Strnad toys with the reader by keeping Jean in the picture, constantly teasing that they can’t escape their connection.  It may not signal a reconciliation, but it does address the intricacies of marriages that end in divorce and that there are some genuine feelings the couple share that they can’t escape.  It’s a wonderful example of real human emotions portrayed in a mature way, a true high watermark of the medium.

If there’s a drawback to Sword of the Atom, it’s that things move a little too quickly.  While it’s great that Kane and Strnad pack a lot of story into the initial mini-series, that part of the tale would’ve benefited from extra issues to let some of the more emotional beats breath more.  It’s also worth noting that the Science Fiction/Fantasy tropes will be familiar though there are a few innovations due to the Atom’s specific circumstances.  Overall, these are small complaint that is easily overlooked in light of the fantastic art and emotionally engaging writing.

Sword of the Atom is fantastic collection!  The art is on par with the best stuff you’ll ever see, Gil Kane is a legend for a reason.  The writing is an example of mid-1980’s mainstream comics that were maturing and developing.  Incorporating complex real human emotions raises the level of this series from the average book of the era.  And, the swashbuckling adventure is pretty darn fun, too!