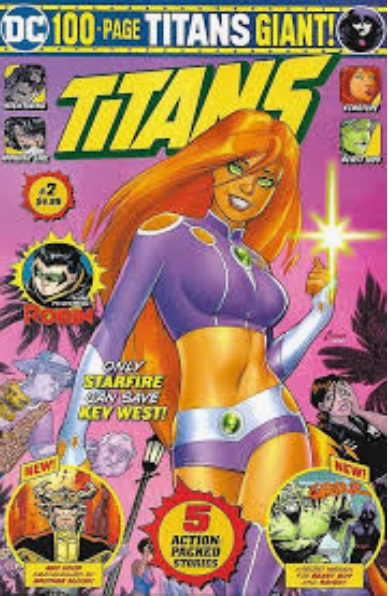 The Titans face off against Brother Blood, and they have to team up with Deathstroke to save his daughter, Ravager…or do they?

It’s great to see Dick Grayson as Nightwing in Titans Giant #2.  This line up with Donna Troy going by Wonder Girl more closely reflects a classic version of the team.  Brother Blood is an appropriate adversary for the Titans, having first faced off against them in New Teen Titans #21  by Marv Wolfman and George Perez.

There’s a human element to this story as Deathstroke gets at the team with a plea for help in order to rescue Rose, his daughter, Ravager who’s “undercover” amongst Brother Blood’s disciples.  It’s probably the strongest aspect of the new lead story in Titans Giant #2.  Surprisingly, Jason Todd is the one who seems to feel it the most, and Phil Hester works in Jason’s background nicely as his motivation for his empathy for her situation.

The reprints in this issue are really strong.  Really strong….  The Teen Titans reprint is from issue #51 of the first series and it features the team seen in Titans Hunt which preceded “Rebirth.”  It’s not a well known Titans line up, but it is a fun and solid example of the team.  The Giants have not usually reprinted much older than “The New 52,” so it’s great to see something from the ’70’s.

The Starfire reprint from the “DCYou” era is a pleasant surprise!  I didn’t catch this the first time around, but it turns out to be an enjoyable and fun take on the character.  If you recall, “DCYou” got lots of accolades for Batgirl.  This first arc plays on the “stranger in a strange land” theme and Amanda Conner and Jimmy Palmiotti find some humor in it as well.  It’s a well-balanced approach. 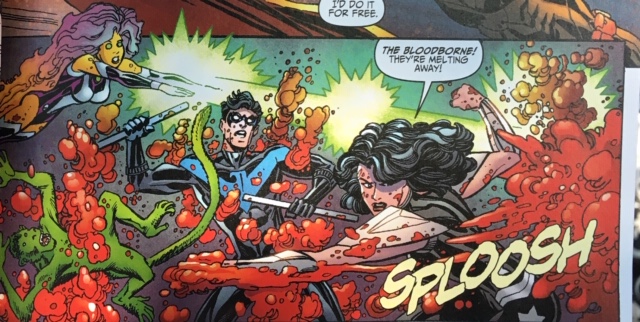 The line-up for the Titans is a bit curious at first.  Although, closer inspection reveals that it is echoing the Titans TV show on DC’s streaming service, DC Universe.  While this creates a lot of synergy for the TV show, this line up doesn’t feel quite right.  Red Hood is not exactly a good team player and his appearance here feels softened by the desire to fit him into the book with the other characters in the show.  While he has a strong emotional presence in the issue, it doesn’t feel quite right. 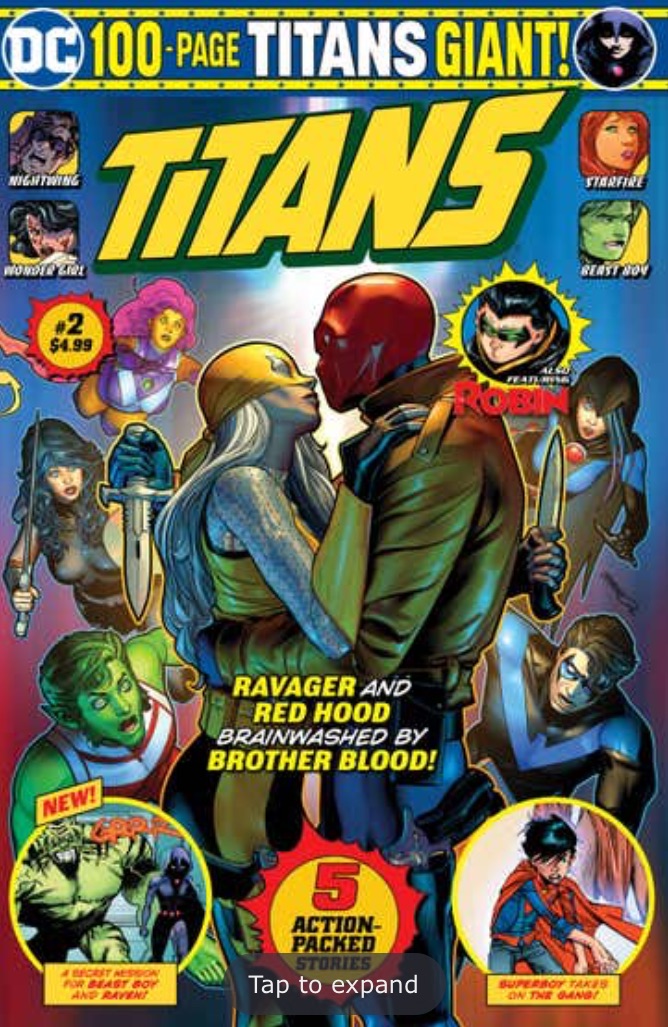 Though the original Titans story in Titans Giant #2 is good, it’s overshadowed by the reprints.  Overall, though, the issue is worth it, especially if you haven’t read the Teen Titans or Starfire reprints.  Even the Super Sons reprint from Adventures of the Super Sons #2 is outshone by these other reprints.  This is probably one of the most balanced of the Giants in its selection of reprinted material.

Review: Slugfest: Inside The Epic 50-Year Battle Between Marvel & DC