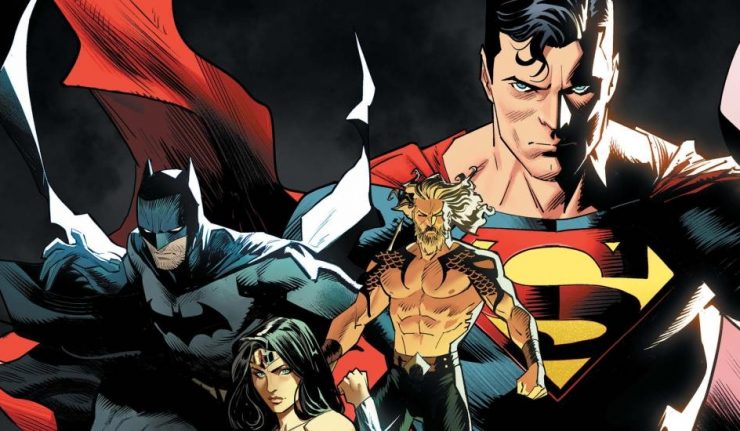 Justice League #45: The Spirit of Vengeance goes global! After spending untold time in isolation, the Spectre is back, and his thirst for retribution will ripple across the Earth! As old wounds are reopened under the Spectre’s unstoppable influence, it’s up to the Justice League to stop the conflict. But how can they act on a global stage when they must first contend with their own resentments?

When The Spectre appeared at the end of last issue, I thought that he was going to assisting the League against the unknown threat that was exacerbating the tension between them. However, Justice League #45 reveals that the Spectre is the source of the problem, not the solution.

It seems that Jim Corrigan has relinquished his role as the Spectre’s human host. He is tired of spending decades connected to the literal Spirit of God’s Vengeance. And as Batman states, “Yes, the capital “G” God”. I find it interesting that Venditti doesn’t mince any words. He doesn’t have the League use one of DC’s usual euphemisms for the Almighty, such as the The Presence or The Voice, but comes right out and says “God”.

But the unmoored Spectre needs to unleash his bottled up force of Vengeance. The conflict between the League members was caused by the Spectre releasing some of this Vengeance using the team as a conduit. But the Vengeance force is building to a level beyond what the world can cope with.

So, the League must travel to Tartarus to convince Corrigan to change his mind and reassume his role as the Spectre’s host. And the way to Tartarus is on Themyscira. Diana leads her teammates to her home, only to face the wrath of her sister Amazons.

I liked seeing that at least some of the Leaguers were capable of briefly, breaking the spell the force of Vengeance had on them. That they are able to fight the literal power of God, even if momentarily, shows the formidable power of will they possess.

And I like that even after they regain their senses, there are clear signs that of the effects of the Spectre’s Vengeance. Diana refers to the others as “you lot” before Aquaman reminds her, “Us lot. We’re a team remember? You’re one of us”. And the Amazons seem overly hostile to Diana. Even if she is breaking one of their strictest rules by bringing men onto the Island, their reaction seems much harsher than it would be otherwise.

By using the idea of Corrigan attempting to renounce his role as the Spectre, Venditti is inviting comparison to John Ostrander and Tom Mandrake’s run on The Spectre. Unfortunately, Venditti’s story is doomed to come up short in that comparison. However, that doesn’t diminish the fact that Venditti’s story is still a pretty good one. If he had an entire series to attempt it, rather than a single story arc, then perhaps he could produce another classic Spectre epic.

Justice League #47 yet again shows us a glimmer of the potential epic Justice League run we might have gotten if he was sticking around for the long haul. I look forward to seeing how he caps off his run on the title over the next two issues.