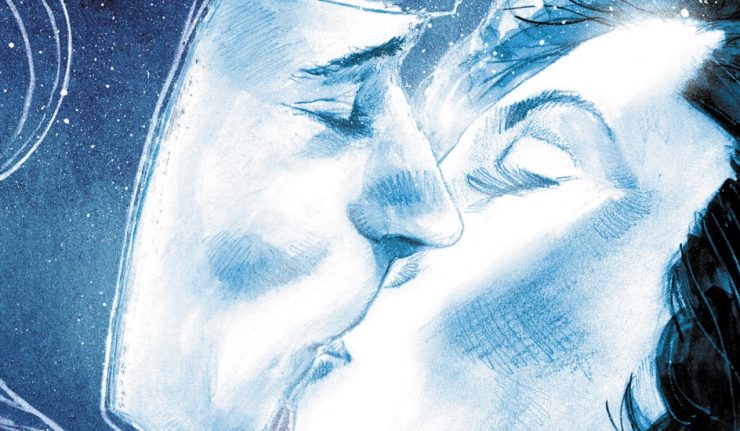 In this very special first look of Strange Adventures #3 on July 14, can Adam Strange handle the truth?

After the cosmic adventurer was accused of murder and had his whole record as a soldier questioned, he turned to Batman for help clearing his name. But someone else was needed to ensure that the investigation would be truly impartial.

Enter Mr. Terrific, the man for whom “Fair Play” is a credo to live by. Be careful what you wish for, Adam Strange, because your life is about to be turned upside down. This could be one of the greatest tests you’ve ever faced. Like when you had to prove yourselves in Rann’s gladiatorial arena.

This adventure between two worlds continues, with Mitch Gerads drawing the gritty Earth sequences and Doc Shaner showing us the splendor of Adam Strange’s battles in outer space!

The series was announced on social media during San Diego Comic-Con last year. Strange Adventures will run 12 issues, each one running 28 pages, with the first issue to be released on March 4. Gerads and Shaner will collaborate on the art, both alternating on pages and also directly collaborating, with King writing a story that promises to take a new look at the classic character — as well as a still-unnamed “surprise DC hero” who will play an important part in the story.

“Adam Strange is one of a long line of characters — like Tarzan and Flash Gordon, stolid men with dimpled chins who thrive in ‘foreign lands’ — who stand in as a metaphor for a 19th century European dream of colonialism,” the writer said Thursday in a statement. “Of course, colonialism was nothing like this dream, and it’s that contrast that interests me: the bloody gap between the myth and the reality.”

He continued, “I wanted to tell two stories simultaneously, and have them play off each other: the story we tell others and the story others tell about us. To represent these two aspects, we use two of the best artists in comics, then we weave those two tellings together in odd and new ways that I don’t think anyone’s seen in modern superhero comics. So it’s a way to do something new and different and hopefully something cool and compelling.”

Check out the First Look images of issue #3 of Strange Adventures below: