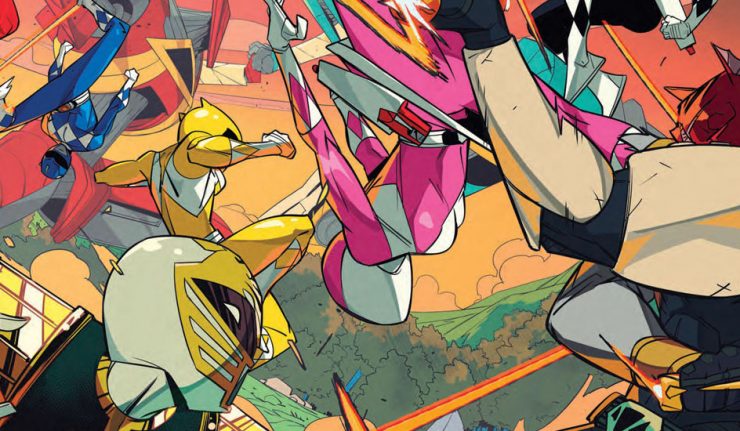 The Mighty Morphin Power Rangers & the Omega Rangers — along with surprise new allies — versus The Anointed in the conclusion to Necessary Evil! Everything has been leading to the shocking return of a fan favorite character so big that they needed a last page gate-fold to contain it! But what does it mean now that [SPOILER] is back?

Jamal Campbell’s cover is solid. The Rangers all look cool and I like the background.

The interior art is good as well. Most of the issue is action and it looks solid. It has a good energy that keeps the pace moving. It’s big, stylistic and over the top as one would want from Power Rangers.

I love that Trini is the one that gets to face the big bad. She was the most under utilized of the original show and became one of my favorite characters thanks to the comics. She’s really cool and I enjoy it when she gets to kick ass.

Rock, Adam and Aisha get to come into their own a little more in this especially Aisha. They take charge in the fight against Dayne which is cool. Aisha comes up with the clever strategy to beat him and it’s a lot of fun. I also like that the two Yellow Rangers get the spotlight; that’s a nice parallel.

I don’t love the ending. As evidenced by the summary, the book is marketing itself on the reveal of this character. It’s a big deal to them and probably a lot of fans. But I do not care; I am so tired of this character. Necessary Evil was a nice reprieve from him so I appreciate that. But I am not looking forward to another story focused on him. He has dominated these comics and I’m just tired. I don’t ever need to see him again. I totally get the interest in what they’re setting up but I was disappointed by the reveal.

I enjoyed this issue. The action is a lot of fun with some solid art. Ryan Parrott highlights underrated Rangers which I appreciate it quite a bit especially Trini. I think the ending is lame but Mighty Morphin Power Rangers #50 is a fun comic.