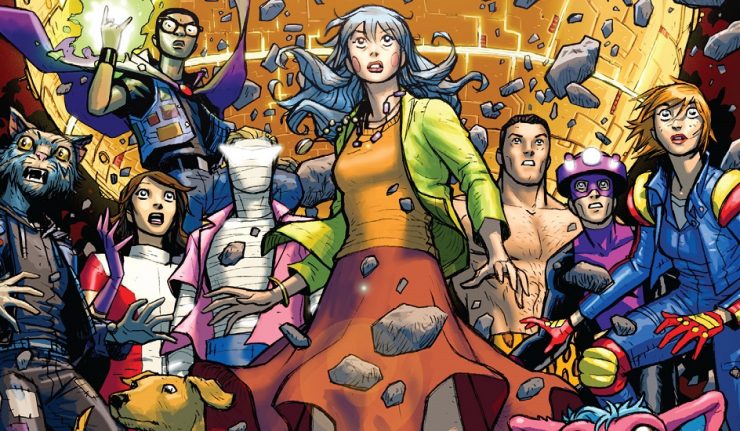 An out of control Planet Cliff is about to eat Orbius.  In his desire to “fix” everything, Cliff is about about to do the opposite.  And, Casey Brinke must make the decision of a lifetime to help Jane save Cliff!

It’s great to have the wonderful Nick Derington back on Doom Patrol: Weight of the Worlds even if this is the final issue of the series.  Derington’s ability to communicate facial expressions carries a lot of the storytelling.  There’s no doubt what’s going in the wordless panels as the thoughts and emotions are obvious on the characters faces.  Slow down and absorb these subtle moments!

The themes in this series have been very powerful.  This final issue wraps it up nicely as it demonstrates a few things about life: It’s never too late to start over, your friends are there to help you and self-sacrifice is noble.  Cliff has been through the wringer since the end of “Milk Wars,” when he reverted back to a human being.  In Doom Patrol: Weight of the Worlds #7, Cliff, having run a bit amok in his own desire to help others, is finally in need of help himself.  And, he gets it.  And, it shows that even though he’s gone of track he can start over as this time he reverts to a baby Robotman.

What’s significant is that Cliff can’t do it himself.  His friends in the Doom Patrol come to save not only Orbius from him, but save him as well.  Cliff has gotten too big to have perspective.  His friends, led by Casey Brinke and Crazy Jane take the lead in order to stop Cliff and help him gain a new start on things.  He won’t be defined by his mistakes.

Finally, Casey seems to make the ultimate sacrifice as she appears to be killed in her effort to guide Jane’s mind in the right direction in order to save Cliff.  To the Doom Patrol it first appears that Casey has “died,” but it is soon revealed she survives in “Danny Comics.”  This appears to be her reward for her selfless act that has enable Jane to save Cliff.  She will live on with her creator (Danny) forever immortalized in comics.  Casey’s noble act promises an existence beyond the material world.  A Christian might call this Heaven.

In the end, Doom Patrol: Weight of the Worlds #7 offers hope for everyone.  If you are in trouble, if you are depressed, if you are struggling with problems, there is a solution.  It starts with the individual and eventually your friends will be there to pick you up when you need it.  And, ultimately, starting over may be the thing you need to do, and it might take a couple tries to get it right.

It’s a shame that a book with such a positive message is not able to sustain a longer run.  Because of the off-beat approach it will always be a tougher sell than a standard super-hero book, but that uniqueness is also its greatest attribute in its ability to tell stories with such deep and resonant themes without being obtrusive or trite.

Thematically, Doom Patrol: Weight of the Worlds #7 wraps up the series in a beautiful way.  The Doom Patrol has always been a different kind of title, but this run under Gerard Way’s Young Animal imprint has been especially satisfying.  With the delays to this title, one should undoubtedly go back and read all 7 issues in one sitting to get the full effect.  Thanks to all the wonderful creators on this title, especially Way, Nick Derington and Tamra Bonvillain who started it all in Doom Patrol #1 way back in September, 2016!  Missing you already…